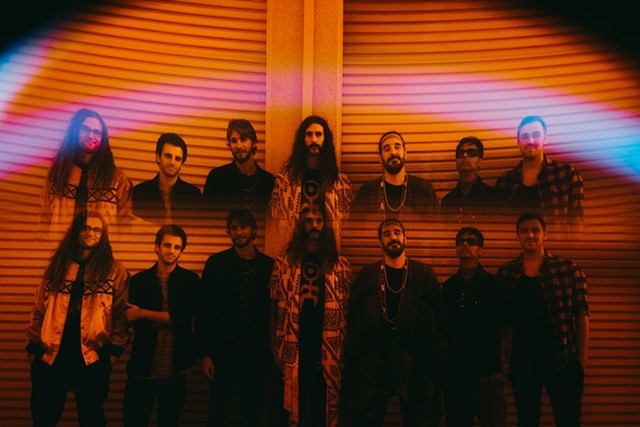 In 2015, Vermont's Grace Potter & the Nocturnals went through a shake-up. For reasons both personal and professional, the globally touring rock band ceased to exist in its original form as Potter essentially went solo. Among the departing players was Nocturnals guitarist and cofounder Scott Tournet.

When asked about the split in a 2016 interview with JamBase, he said, "In the early days of GPN, we had a really tight fan base who really understood that we were a true band. As we got bigger, I think that most of the fans we picked up along the way were only focused on Grace and really missed the point that there was a band and family thing happening ... More and more, the rest of us were treated and looked at as a hired backing band and, to be honest, that sucked after putting in years of work."

After the split, Tournet, 42, moved to San Diego to settle down and start a family. He also founded a new group, Elektric Voodoo, a polyrhythmic, world-beat-flavored pop-rock-fusion group. His inclinations can be traced back to his thesis project at Goddard College: a large-scale, Fela Kuti-inspired opus. Tournet maintains a strong connection to the Green Mountains.

Elektric Voodoo are about to release their second album, Animal. They've selected their show on Friday, October 5, at Nectar's in Burlington as the album's official release party.

Seven Days caught up with Tournet by phone.

SEVEN DAYS: Given that you essentially started from scratch with Elektric Voodoo, what's something that you forgot about your early days playing music that you've now experienced all over again?

SCOTT TOURNET: Like, in a positive or negative way?

ST: For me, the camaraderie of vans. With the Nocturnals, we were on a bus at a certain point. And it got nicer and nicer. [For Elektric Voodoo], I got a van. We have to all listen to the same album at the same time. There's just a connection more so when you have to listen to albums you may not like if it's someone else's turn to choose. And that forces you to check out new stuff.

When you're in close proximity like that — I missed that a lot. We had that in the early days of the Nocturnals, as well. That's where I got exposed to so much different music. We all kind of, like, created a groupthink in a way, a chemistry.

SD: If you could use one noun, one verb and one adjective to describe Animal...

ST: They didn't teach us that at Goddard.

SD: [Laughs] OK. How about this: If your self-titled Elektric Voodoo album was like a first child, how are you raising Animal differently?

ST: Ah. You know, the first one — in terms of production — we were giving it McDonald's and Jell-O and sugar cubes. This record is more like organic, cage-free eggs.

SD: Right, or that shit from Whole Foods that comes in those pouches?

ST: Yeah, man. The first one I engineered all by myself. I played most of the instruments on the first one but have since got a band together.

SD: Talk about the process a bit.

ST: I wrote [Animal] a year and a half ago — maybe even longer than that. I was writing it a little bit before and around when Trump got elected. My wife was pregnant, and I just had an urgency. I wrote all of it in two or three months. I knew I had this time before we were having a baby. It lit a fire. I think also the whole him-getting-elected insanity spurred that along, as well. It pushed itself. I didn't have to find it. It just showed up.

So I wrote it, did some demos, and it was also just as the horns were joining the band. So that was really exciting creatively. It kind of pushed along the writing, as well. We just went in and cut all the basic tracks in a couple weeks. Then I was dicking around with it for a year after that, adding overdubs and doing vocals and trying to figure out how to put it out and when and where. We were looking at doing the record-label thing, and then that didn't happen.

SD: Seems like one of the first singles, "Low," is a good snapshot of your headspace. It's pretty overtly political.

ST: You think you've bottomed out, and then another layer opens up underneath. The biggest fucking asshole is the person that gets everybody's attention for the moment. [That] seems to be the theme in the last few years. I think I was kind of feeling disappointed. It's probably my own fault for being on Facebook too much or something.

SD: Mechanically speaking, how did working with your other band members shape the final product?

ST: It brought some fun and excitement into it. Some of the guys are a little bit younger, so they haven't done all the things that I've done. For them, going into a studio and cutting a record in and of itself was really exciting. For me, to be around that was invigorating. Seeing the world through someone else's eyes was really nice. That's something I experience having a son now. It definitely helped peel off a few layers of crusty cynicism — which is really nice and refreshing.

SD: How many people are currently in the band?

ST: It's fluctuated a little between six and eight. We're currently at seven.

SD: Have you played any super-duper-tiny stages?

ST: Completely. It's kind of a grab bag of shows that we've done so far because we started from scratch. We went to one place that had one microphone. And we played in front of a plate-glass window in a brick room with a little Bose PA system. And we ended up having a fun show.

My mind always goes to when the Nocturnals were starting out. We were going to all of these venues, and we would sometimes bitch about not having enough space onstage. We went to this one place — [Club] Helsinki, in western Mass. The sound guy was like, "Man, fucking Antibalas came in and played here. Shut up." You need to have that anything's-possible attitude when you're in a bigger band.

SD: Totally. I have a lot of respect for bands that can just make it work.

ST: That's, like, half the thing with doing this: just kind of accepting the situation and making it fun. It's always changing and fluctuating. I've struggled a lot with that through the first many years of my career. I could get easily thrown off if things weren't a certain way and get uptight and let it affect me.

SD: I imagine all of what you just said could apply to parenting.

The original print version of this article was headlined "Animal Instincts"