Post-It Votes: Mail-In Voting in Vermont May Be Here to Stay 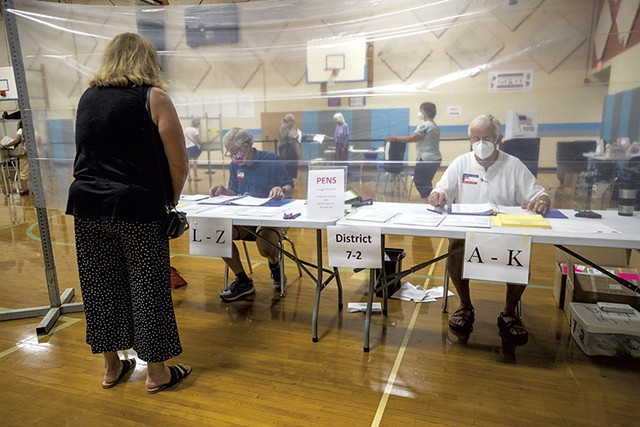 Republican leaders who earlier questioned Vermont's pandemic-driven mail-in balloting experiment expressed newfound comfort this week with a system that some say helped them gain ground. The predicted blue wave failed to wash ashore in Vermont on November 3; instead, GOP candidates picked up a seat in the Senate and three in the House, including the Democratic speaker's.

"Republicans don't have to be afraid that it's an obvious giveaway to the Democrats, because we benefited from it more than they did this year," said Paul Dame, the Vermont GOP's political director.

To lessen the need for possibly risky in-person voting, Democratic Secretary of State Jim Condos had a ballot mailed this fall to every active registered voter in Vermont. Preelection, Republicans complained about the change; the party's softer stance postelection suggests the pandemic experiment could become permanent.

Senate Minority Leader Joe Benning (R-Caledonia) is convinced those mailed ballots bolstered his victory. "I got more votes than I have for a long time in this race," Benning said.

During the 2016 presidential election, Benning finished 1,472 votes behind his longtime seatmate, Sen. Jane Kitchel (D-Caledonia). This year he narrowed the gap to just 228 votes. He also received 2,715 votes more than the other Democrat in the race, Matthew Choate, a former senator whom Benning had considered a serious challenger.

Rural residents who might not have voted in person likely embraced the vote-by-mail option, he said.

"I think mail-in voting helped Republicans in Vermont, because at the end of the day, it gave some of these rural [voters] their ballots on their table and they filled them out," Parent said.

The election results surprised many in the state's GOP.

"The supposition at the beginning of this — even Trump was saying it — was that mail-in ballots were going to benefit the Democrats," Benning said. "That was a widespread belief in Vermont." Benning had questioned the system but now supports vote-by-mail.

Gov. Phil Scott appears to be coming around, as well. Scott raised multiple objections to universal mail-in balloting before the Democrat-controlled legislature stripped him of a say in the matter and gave Condos sole authority to decide election rules this year.

Early in the pandemic, Scott extolled in-person voting as a cherished Vermont tradition and said he hoped the state could return to normal by November. At a press conference last week, he said he needed to "reflect" on the future of mailed ballots and believed the pandemic might require their use for local elections in March.

"We've had very low voter turnout for Town Meeting, and this may be a way to bolster that," he said.

VTGOP chair Deb Billado is a vocal supporter of outgoing President Donald Trump and had echoed the president's unsubstantiated claims that mail-in balloting would lead to fraud.

She authored a piece in the party's May newsletter that used the word "fraud" no fewer than eight times. In "Condos' Mail-in-Voting Scheme: A Recipe for Voter Fraud," Billado argued that because the state's races are sometimes very close, "there is no room for any fraud!" She branded mail-in balloting "clearly a power-play by the Vermont Democratic Party to boost their vote counts" and an "unnecessary procedure that has great potential for voter fraud."

Asked this week whether the Republican victories in Vermont had been tainted by voter fraud, she walked back her previous position.

"I never had high fears of fraud," she contended in an email to Seven Days. "The gains we made are most likely attributed to good candidates who worked really hard."

Condos stressed that studies have shown mail-in balloting increases voter participation but does not favor one particular party. "Vote-by-mail should not be a partisan issue," he said.

His job is to help Vermonters vote regardless of affiliation, he said, and by that measure, mail-in voting clearly was a success. This year's historic 372,366 ballots cast smashed the previous turnout record of 326,822 set in 2008.

Condos said he understands that people have legitimate concerns about the mail-in-balloting process. This includes questions about election security, drop-box locations, defective ballots and the $3 million cost.

"Sometimes, when you try something new, there is fear of the unknown," he said. "People are leery of something that they haven't done before, [but] sometimes you have to kind of go through the process to prove that it works."

The planning by his small elections team was "spot-on" overall, he said, and with the help of town clerks, Vermont experienced a "successful, smooth-running Election Day."

Some town clerks are still not convinced that the state should take such a robust role in elections.

Dorset Town Clerk Sandra Pinsonault said the Secretary of State's Office should have printed up the ballots and envelopes, sent them to clerks, and let clerks mail them to voters instead of centralizing the process. That created a confusing "disconnect" between clerks and voters, some of whom had no interest in mail-in voting.

"Ninety percent of people who came in to vote threw their mail-in ballots away," Pinsonault said, calling that a waste of money. "They like coming to the polls."

Other clerks hailed the system — especially the decision to allow clerks to process ballots beforehand — for helping election night go more smoothly than it might have otherwise.

"I just think the numbers speak for themselves," Stowe Town Clerk Lisa Walker said. "The turnout really proved that this worked."

Once results are certified, state elections officials plan to have a detailed debriefing in December to gather feedback from clerks, Condos said. It's not up to him whether the state holds future elections by mail and, if so, how to pay for them. Federal coronavirus aid picked up the tab this year, but the state would have to foot the bill in the future, he said.

Dame said funding the system in the future "may be a tough sell" in the tight budget years ahead, but he thinks the switch — with some improvements to ensure it's done properly  — is "the right thing to do," given the boost to voter turnout.

Sen. Jeanette White (D-Windham), chair of the Senate Government Operations Committee, said she and her colleagues must examine the role of vote-by-mail in driving higher turnout, as well as any problems that arose, before extending the system to future elections. "Personally, I think it's something that we should seriously consider keeping in place," she said.

Paul Burns, executive director of the Vermont Public Interest Research Group, advocated for the switch to mail-in balloting and hopes it's here to stay. Even after the pandemic, people will likely demand the convenience of mail-in voting, regardless of which party believes it benefited, Burns said. While he enjoys the sense of shared civic duty that comes with voting in person, he doesn't see how the state can backtrack now.

"We had 40,000 more people vote in this election than in any other election in history," Burns said. "How do you then say, 'No, turns out we're going to make it a little bit harder for you next time?'"