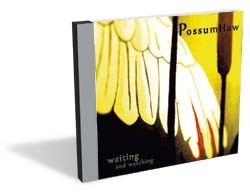 Waiting and Watching is the fourth CD that the northern Vermont string band PossumHaw has produced in the 10 or so years that they’ve been performing. It’s tempting to call them a bluegrass band because of their instrumentation. But as the new record proves, the band can deliver a much broader musical palette.

PossumHaw continue to capitalize on their musical strengths, most notably the talents of Colby Crehan, the band’s chief songwriter and lead vocalist. Crehan has penned nine of the 12 songs on the disc, and a few instant classics. These include the title track, a really catchy three-four balled entitled “On the Lemon Fair” and a chooglin’ gospel number called “Shake Out the Chaff.” Crehan’s other high-profile gig is being one of the fine vocalists in the Bluegrass Gospel Project. With PossumHaw, the band’s mission seems to be ably accompanying their front woman’s music. And that’s a good thing, as she has written a real variety of soulful new songs.

The newest member of this Vermont acoustic quintet is bass man Mitch Barron, who played for years with the Addison County trio Bread and Bones. Barron is a master of many styles, and his contributions to the evolving PossumHaw sound include some precious low drive and a tangible, rock-solid rhythmic foundation.

Ace mandolinist Stephen Waud — who also tears it up with the Modern Grass Quintet, another local bluegrass ensemble — guitarist Charley Eiseman and banjo player Ryan Crehan sound like they’ve been playing together for years, and they have. The instrumental core of this band has risen above the “noodle-grass” tendencies of some of the band’s earlier recordings.

Peter Engisch at Ad Astra Recording in Williston engineered the album, and the resulting audio sparkle demonstrates, once again, that he knows how to get the best sound from acoustic instruments. Crehan’s vocals and Waud’s mando are right out there, where they belong, but all the players are in exactly the right place to show off how well they mesh as a band.

You can catch PossumHaw live as part of the Coffeehouse Concert Series on Saturday, February 8, at the Rutland Unitarian Universalist Church; and Sunday, February 9, at the United Church of Westford. Waiting and Watching is available at possumhaw.net.