Portraits by the Artist as a ?Very Young Man . . . and His Mom? | Arts News | Seven Days | Vermont's Independent Voice 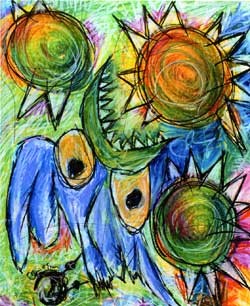 Montpelier’s Langdon Street Café is a funky hangout with worn, mismatched furniture and thrift-shop décor. A dark-roast aroma fills the air, creating something like a permanently caffeinated climate. The place is wired electronically, too, for laptoppers and live musicians. All this ensures the patronage of grown-up hippies and hipsters, but Langdon Street is family-friendly as well, offering a toddler-sized table and chairs and kids’ games in a cozy nook.

This is, in short, a perfect venue for the quirky, high-energy artwork of Cecily Herzig. Make that Cecily Herzig and her son Ever Tofel. The two, ages 33 and 4, share a current exhibit at Langdon Street entitled “Birds, Bats & the Bizarre.” Though glass and neat frames contain the 17 brilliantly colored drawings, the images look like they’d prefer to leap out at unsuspecting viewers.

Last weekend the café hosted a reception for the collaborative show, which runs through November, but it wasn’t Ever’s first. He’s been co-creating artwork with his mom since age 2 in their South Strafford home; this exhibit previously appeared at the Hotel Coolidge in White River Junction. The drawings generally begin, Herzig explains, with a few “scribbles” — primarily circles — by Ever. Then she takes over and completes the picture, using handmade, multicolored crayons and water-soluble wax pastels. “Earlier ones were just, what did I think it looked like — it was sort of accidental,” Herzig says. “In the end, there’s probably not much left of what he’s done; I color over them.”

This should not be mistaken for kiddie art: Herzig’s color sensibility and execution are too sophisticated for that. Still, most of her works with Ever include some googly-eyed critter of indeterminate provenance. These tend to look simultaneously fierce and cute, à la Maurice Sendak. “I’ve been doing a lot of teeth,” Herzig says. “Some people are disturbed by them, but I think they’re funny.” Case in point: the menacing, razor-toothed, um, beak of the feathery fiend in a drawing innocently titled “Baby Bird.”

The collaboration that started as a fun parent-child activity became more purposeful over time. After all, Herzig is a trained artist, as well as a geographer. Her projects have included creating displays for the Montshire Museum of Science and cartographic services for the Hanover Upper Valley Land Trust. She has also exhibited her solo artwork. The current 14-by-16-inch drawings with Ever sell for $230 each.

The art portfolio on Herzig’s website — www.usedlipstick.com — includes a selection of the collaborative works as well as her earlier watercolor landscapes. While competently done, the latter are far more traditional. It’s safe to say the infusion of toddler tactics has changed Herzig’s approach to making art. It’s precisely the kind of childlike spontaneity that many a master artist has tried to recover, with various degrees of success. Though her son participated, Herzig says, “This is the work that really feels like me.”