Portrait of the Artist 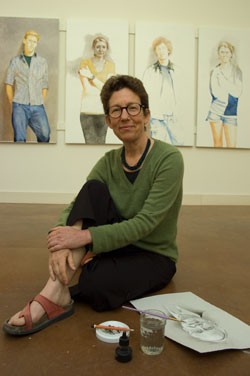 Kate Gridley may be the best little-known artist in Vermont. She’s been painting portraits, still lifes and landscapes of exceptional quality in a Middlebury studio for the past 20 years without drawing much notice beyond a local circle of cognoscenti and a stable of New York clients. How diffident is Gridley? In an age when many artists make aggressive use of the Internet to publicize their work, she doesn’t even have a website of her own.

The obscurity is mainly intentional. Gridley says she was comfortable for years as a stay-at-home mom who painted when she was able. Self-promotion didn’t seem necessary, since she was making a living from regular portrait commissions and sales of her work in Manhattan galleries. “I’ve always sold well,” Gridley notes matter-of-factly.

Yet suddenly she’s a celebrity in Vermont. Gov. James Douglas’ recent choice of the 54-year-old artist as his official portraitist has brought Gridley a measure of fame — which, given her talent, is likely to last longer than 15 minutes.

Petite and wiry, wearing a green V-neck sweater and rolled-up jeans, Gridley appears comfortable being interviewed about her life and work. But she simultaneously seems a bit blinded by the limelight. “The process has just been so public,” she marvels. But the pressure of painting the guv’s portrait, Gridley adds, “is mostly OK.”

The Douglas commission didn’t arrive out of the blue; Gridley actually contacted State Curator David Schutz to inquire about it. That was “a business decision,” she explains — the work will surely bring a five-figure payment, though Gridley declines to specify. For his part, Douglas did not respond to queries about his privately financed portrait.

Spokesman Dave Coriell did reveal that Douglas chose Gridley from about eight artists who had sought the commission. The governor was particularly impressed with her portrait of Timothy Light, a former president of Douglas’ alma mater, Middlebury College.

Light’s likeness hangs on the balcony of a conference room in the college’s Old Chapel along with portraits of other Middlebury dignitaries. Even when viewed from a distance, Gridley’s depiction of Light is eye-poppingly vivid. In the portrait, Light, an Asian-studies scholar, sits before a calligraphed screen and wears academic robes so red they seem aflame.

Gridley achieved the shocking scarlet color by making her own paint. Grinding pigments and mixing them with linseed or walnut oil is a skill she learned while studying in Italy on a grant from Williams College. Gridley makes paint only occasionally these days, but she told Douglas she’d do it for his portrait should it require a bright color that can’t be obtained commercially.

Gridley hasn’t yet decided how the governor should be posed. And, she notes, “It’s not purely up to me.” But she’ll probably want to depict Douglas in a standing position, she says, because that’s how she’s always pictured him. Prior to a recent photo shoot, Gridley had spoken to the governor only once or twice, but she has observed him for years in his role as moderator of Middlebury’s town meeting.

Describing herself as a fiscally conservative Democrat, Gridley says she has no qualms about memorializing a Republican governor. In fact, she believes it’s a testament to Douglas’ leadership that Vermont “will come out of this recession in pretty good shape.” Gridley also respects Douglas’ “willingness to stand up and say what he thinks, regardless of whether it’s popular.” And she’s learned of the governor’s “tremendous sense of humor” — a quality she hopes to convey in his portrait.

Choosing the affect is crucial, Gridley says, because she and the governor will be “constructing a truth” along with his lasting image. She notes that Howard Dean’s official portrait, which shows him seated on a lakeshore holding a canoe paddle, will forever identify him as an outdoorsman and environmentalist — though that’s not the first image of Dean that occurs to many Vermonters.

Asked which politicians’ portraits she admires, Gridley says she’s awestruck by Aaron Shikler’s rendering of John F. Kennedy because of the truth it so poignantly constructs. In the painting made after the president’s assassination, Shikler presents a standing and brooding Kennedy with arms folded and head bowed, seemingly weighed down by the pressures of his office, or perhaps anticipating the looming end of his life.

Gridley also appreciates the portraiture of John Singer Sargent and Diego Velázquez — not so much for their subjects as for their handling of paint. She gives her own methodically composed works a high degree of finish, making her portraits and still lifes appear Old Masterish. It’s a big shift from the abstract paintings that were her exclusive focus at Williams College, though Gridley has been working in a representational style since her study sojourn at Florence’s Uffizi Gallery, and with a mentor in Kyoto.

She went to Japan, Gridley says, because she was “so tired of Western preppy culture.” It’s easy to see why: Before Williams, she attended the la-di-da Brearley School on Manhattan’s Upper East Side and graduated from the elite Phillips Exeter Academy in New Hampshire. Her father was a Manhattan banker and “a Sunday painter,” while her mother taught at St. Bernard’s School, just off Fifth Avenue.

Gridley herself has taught at private schools in Middlebury. And she lets local schools know that students are welcome to arrange visits to the skylit studio adjoining her home. “I want young people to know that real artists are accessible,” Gridley explains.

She and her husband, Orton Family Foundation spokesman John Barstow, have two sons: Charles, 22, and Angus, 18. The young men will be included in a series of 12 large-scale portraits Gridley has begun painting. She’s giving males and females ages 17 to 22 austerely handsome depictions that seem to leap from their plain white backgrounds. “Almost nobody makes portraits of people this age,” Gridley observes, “even though it’s certainly a significant time of life. They’re actively taking ownership of themselves.”

Gridley sees the series as an act of affirmation. “As we hand off this messy world to the next generation, I’m thinking of what gives me hope,” she says.

The studio walls also display a wintry Vermont landscape that recalls Andrew Wyeth, as well as other portraits and a few still lifes. While some might admire the virtuosic versatility in Gridley’s work, gallery owners often view this as a commercial handicap, she explains. “They tell me they want a unified look to a show,” Gridley says. “But,” she adds with a grin and a shrug, “I never worry about that.”