Portrait of a State 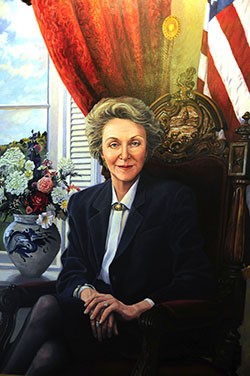 Every Vermonter can picture the gilded dome of the Statehouse in Montpelier. But not so many are acquainted with the pictures inside the 151-year-old building that depict all the big figures in Vermont history — sometimes in flattering fashion, sometimes in ways that fall flat.

“More than just a home for the legislature, the Statehouse is also a museum,” notes David Schutz. As state curator, he watches over the portraits, battle scenes, panoramas and genre paintings that hang in both conspicuous settings and ones the public rarely sees. Schutz, who became the state’s first curator in 1986, also takes care of the building’s antique furnishings and accessories, which include — who knew? — one of the nation’s preeminent collections of gaslights.

A genial and knowledgeable host, Schutz recently conducted this reporter on a tour of the Statehouse and its art. One of the highlights was the legislators’ lounge, a second-floor space with a carved fireplace mantel that just might be the work of the great American sculptor Augustus Saint-Gaudens (1848-1907). Here hangs what has become the most famous of the 100-plus paintings in the building: “The Quack Doctor” by Montpelier’s own Thomas Waterman Wood (1823-1903), recently appraised at $1.5 million.

It’s one of several scenes of daily life in Vermont on loan to the Statehouse from the nearby gallery named for the artist. In this one, a group of curious Montpelier residents, all dressed in Sunday finery, gather around a horse-drawn wagon from which a huckster in Orientalist getup and his African assistant are pitching potions to the rubes. A flock of ducks near the wagon’s rear wheels alludes slyly to the title of this skillfully executed 1882 work, as does a barely visible inscription on the wagon’s side: “Dr. I.M. Cheatham.”

The setting, Schutz informs us, is the intersection of Main and State streets in Montpelier. So what’s that archway framing the medicine man? The imposing classical structure spanned two downtown buildings once upon a time — where Coffee Corner and La Brioche are situated today, Schutz explains.

Some Statehouse visitors may find T.W. Wood’s work to be the aesthetic equivalent of corn syrup. Former Vermont Life editor Tom Slayton, the son of modernist painter Ronald Slayton (1910-92), used to view Wood’s genre pictures in just that way — until he started looking at them from a less snooty perspective. Slayton now sees paintings such as “The Quack Doctor” as “wonderful, warm, humorous reflections of the life around the artist,” he says.

One notable aspect of Wood’s work is the frequency with which he depicts African Americans. In “Rats,” for example, a smiling black boy shows off a pack of pet rodents. Asked whether there was intentional irony in hanging a painting with this title in a room frequented by politicians, Schutz just chuckles.

Other artworks in the Statehouse also make reference to Vermont’s role in African American history. A giant bust of Lincoln, for instance, commands the view of visitors entering the building from the columned portico on State Street. This sculpture by Larkin Mead (1835-1910), who spent his boyhood in Brattleboro, served as a model for the bronze monument he made for the slain president’s tomb in Springfield, Ill. The bust is the cynosure of the Statehouse’s Hall of Inscriptions, which contains eight marble tablets incised with quotations from Vermonters such as former Vermont Governor and U.S. Senator George Aiken and author Dorothy Canfield Fisher, as well as from the chapter in the state constitution that forbids slavery.

Mead also created the original statue of Ceres, the Roman goddess of agriculture, who looks out over Vermont from the top of the Statehouse dome.

Upstairs from the Lincoln sculpture, Schutz shows off the Cedar Creek Room, a restored reception hall featuring Civil War paintings by Julian Scott (1846-1901). His ginormous masterwork “The Battle of Cedar Creek” shows the 8th Vermont Infantry in action in what proved to be a key victory for the Union Army in the Shenandoah Valley. Born in Johnson, Vt., Scott was “a humble drummer boy who went on to become one of the great painters of the Civil War,” Schutz points out.

Later in the tour, he notes that the Statehouse collection includes portraits of nearly all 80 Vermont governors. A few of the images are entirely speculative, however. The artist who engraved the portrait of Thomas Chittenden — the first of those 80 — was working from a sketch of the governor’s grandson on the assumption that there must have been some likeness between the boy and his grandfather, Schutz says.

There’s no doubt about the political model for Peter Michael Gish’s portrait of handsome Phil Hoff: Schutz describes the young governor’s pose as “Kennedy-esque.” That’s fitting, as Hoff led Vermont’s Democratic Party to a new frontier of political power in 1962, the year after JFK entered the White House. It was a different age, all right: Look carefully, and you can see a cigarette glowing between the fingers of Hoff’s left hand.

On one wall near the building’s entrance hangs Carroll Jones’ rendering of Howard Dean seated on a rocky lake shore, canoe paddle in hand and wearing hiking boots and a blue chamois shirt. Schutz recalls that the late Seven Days political columnist Peter Freyne gave the painting the nickname by which it forever will be known: “L.L. Dean.”

Across the way, there’s Jan Cook Mack’s much larger-scale portrait of Madeleine Kunin, looking authoritative yet friendly in her executive office, with a big bouquet in a porcelain vase beside her. “It’s interesting because it’s a very feminine depiction of Vermont’s first woman governor,” notes State Rep. Peter Peltz (D-Woodbury), perhaps the only member of the legislature who qualifies as something of an art connoisseur.

The Woodbury Democrat earned a bachelor’s degree from Tufts and the School of the Museum of Fine Arts in Boston. Peltz’s two favorite Statehouse works are portraits of an obscure governor — Edward Smith, who served a single term at the end of the 19th century — and a better-remembered Republican, Ernest Gibson Jr., who held the office in the years immediately following World War II. Peltz finds Smith’s gaze intriguing. “It makes me really want to know that guy,” he says. Gibson, meanwhile, looks flyboy dashing in the uniform he wore as an intelligence officer in the South Pacific and later at the Pentagon.

Homie heroes, military and political alike, present themselves immediately to visitors entering the Statehouse. Vermont’s two U.S. presidents, Chester Alan Arthur and Calvin Coolidge, are given pride of place. Nearby hang two U.S. admirals — Montpelier’s George Dewey, posed theatrically on the bridge of his battleship, and Bradford’s Charles Clark — each of whom distinguished himself in the Spanish-American war.

Upstairs, George Washington presides over the House chamber. His august portrait, by Massachusetts artist George Gassner (1811-61), is the only painting in the room, and it would not be there today if either of two fateful moments had turned out differently.

Schutz notes that legislators deadlocked 15-15 on the question of whether to pay Gassner $500 for the work done in the style of popular American portraitist Gilbert Stuart (1755-1828). The tie-breaking vote cast by Lieutenant Governor David Camp in 1837 resulted in the Washington portrait becoming the first work of art purchased by the state of Vermont. The painting would have been lost 20 years later, however, had rescuers not lugged it out of the former Statehouse building as it burned to the ground.

Less-dramatic preservation efforts continue today, with five Vermonters working to maintain the Statehouse’s textiles, furniture, accessories, works on paper and paintings. “The care of such a diverse and vast collection is ongoing,” notes Suki Fredericks, the paintings’ conservator. Her husband, James Maroney, a New York art dealer turned Brandon farmer, made the appraisal that elevated “The Quack Doctor” to the ranks of Vermont’s most valuable paintings.

What’s it like doing the people’s business in what amounts to a museum? “You can’t help but feel the history as you walk through there,” Rep. Peltz comments. A contemporary legislator would “have to be pretty obtuse not to notice our predecessors staring down at us from the Statehouse walls.”