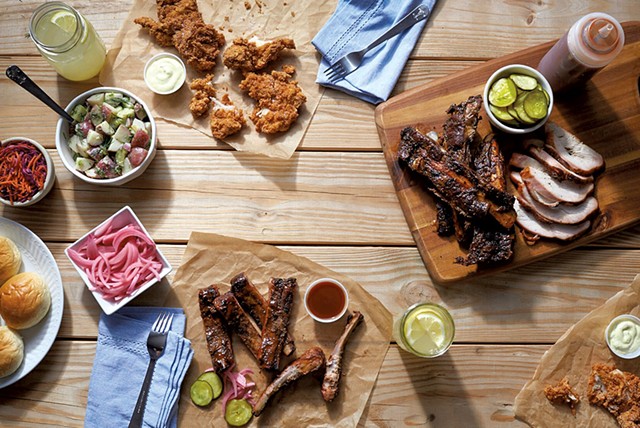 When Pork & Pickles BBQ opens at 34 Park Street in Essex Junction this Wednesday, June 22, plenty of small plates will embody the restaurant's name. Vinegar veggies will come plain or fried. Their brine will give punch to a plate of smoked wings, says chef-owner Chris Simard.

Simard, of food truck the Lazy Farmer, has been building out the restaurant since last winter, with kitchen support from sous-chef Andrew Wyslotsky. Besides pickles, their menu offers fries and curds that melt together with gravy whisked from smoker drippings. Smoked-trout hush puppies arrive with citrus aioli for dipping, while tangy mustard-seed sauce enlivens the pork-belly lettuce wraps.

Then there are the birds. "I am so excited to share the fried chicken," Simard says. He describes it as buttermilk-brined, then double-dipped and fried to a crusty, spice-tinged crunch. Simard toyed endlessly with the recipe while on the road with his truck, which still makes occasional stops around Chittenden County.

Drinks at the 10-table restaurant will include a handful of wines by the glass, two draft beers (currently Lagunitas Brewing IPA and Lost Nation Brewing pilsner, with additional draft lines coming in July), and cans such as Burlington Beer's Future Glow session sipper and Light in the Window rye IPA.

For dessert? It's mid-June in Vermont, so expect fresh local strawberries kissed with sugar and piled on shortcakes — Simard says his are "loaded with buttermilk and butter" — with a wallop of just-whipped cream.

The original print version of this article was headlined "Lazy Restaurant"