“Without you, we will not succeed in beating the corporate powers of Louisiana against the people of the state of Vermont,” the governor told legions of antinuke activists who were protesting Entergy Louisiana’s continued operation of the Vermont Yankee nuclear power plant in nearby Vernon.

With characteristic fervor, Shumlin railed against the out-of-state energy corporation he has accused of fleecing and deceiving Vermonters time and again.

“Vermonters keep their promises,” Shumlin told Brattleboro Community Television later that day. “We expect corporations to do the same.”

It was surely a cathartic moment for a governor who spent the previous week defending an unpopular deal with another out-of-state energy corporation accused of reneging on a promise to Vermonters.

“I don’t think I’ve ever seen as much outrage from Vermonters as I have on this issue,” says Sen. Randy Brock (R-Franklin), who is challenging Shumlin for governor.

The controversy stems from a $21 million, customer-financed bailout of CVPS that took place a decade ago, when the company nearly went bankrupt. According to a deal struck at the time, CVPS must reimburse its customers that amount in some form before any suitor — such as Gaz Métro — purchases it.

In negotiations with the Shumlin administration, Gaz Métro — through its Vermont subsidiary, Green Mountain Power — proposed paying that $21 million back by investing it in weatherization and energy-efficiency programs. Under the terms of the deal, however, Gaz Métro can then bill its customers for the $21 million investment — thereby not really paying the money back at all, critics say.

“People are now going to be charged for paying themselves back. That’s just so convoluted,” says Rep. Patti Komline (R-Dorset), a leading opponent of the provision. “Not only are they not getting their money back, but their rates are going to go up.”

For Shumlin, that revelation and the ensuing brouhaha put him between a rock and a hard place. The governor came out early and hard for the deal. He released a statement the same day — last June — that Gaz Métro put in a bid for CVPS, signaling his support for Gaz Métro’s offer over that of a rival Canadian company.

Weeks later, Shumlin hailed CVPS’ decision to go with the Gaz Métro offer, saying in a statement, “I believe they made the right decision.”

“The governor has been so clearly backing Green Mountain Power and this merger from the word ‘go’ that I think people are justifiably skeptical,” says Sen. Philip Baruth (D-Chittenden), an opponent of the deal.

Like many others in the legislature, Baruth points to the close ties between the Shumlin administration and Green Mountain Power executives — in particular, GMP president and CEO Mary Powell, who chaired the governor’s inaugural ball — as evidence that the governor is protecting friends, not ratepayers.

“There has been the appearance of a conflict,” Baruth says. “And given that appearance, I think you bend over backwards to try to demonstrate that you’re looking out for the immediate financial interests of the voters, and I honestly can’t see that the governor is doing that here.”

But according to Shumlin, “That’s absurd. If you look at my legislative record, there are few legislators that have taken on the utilities like I have.”

The focus on the $21 million rebate clearly galls the governor. While the independent Public Service Board is ultimately charged with approving the merger and settling on its terms, the Shumlin administration hammered out an agreement with Gaz Métro that could influence the final package. Shumlin believes his public service commissioner, Elizabeth Miller, did a bang-up job going toe to toe with Gaz Métro — securing $144 million in savings earlier than proposed and providing for greater public control of the state’s electric transmission lines.

Describing Miller’s negotiating successes during a press conference last week, Shumlin used the terms “beat” and “beat on” three different times to describe precisely what his commissioner did to Gaz Métro.

Set off by angry constituents who learned about the merger through a raft of television advertisements paid for by AARP, a restive legislature has considered various schemes to ensure that the $21 million is returned to CVPS customers in the form of checks — not weatherization funding. One such proposal, advanced by Komline and at least 70 other House members, would simply order the Public Service Board to mandate cash refunds.

To Shumlin’s critics, the governor’s admonitions to stay out of the Public Service Board’s hair on regulatory affairs smack of hypocrisy, given his work trying to shutter Vermont Yankee.

“It’s interesting that he makes that argument when he had no problem getting involved with Yankee over the years,” says Sen. Kevin Mullin (R-Rutland). “It can’t be that what’s good for the goose isn’t good for the gander.”

Since he reemerged in state politics in 2006 after a four-year hiatus, Shumlin has been determined to close the power plant located 15 miles south of his hometown of Putney. Indeed, Shumlin’s narrow victory in a crowded five-way primary for the Democratic gubernatorial nomination in 2010 was largely attributed to his ability as Senate President Pro Tempore to do three things: override governor Jim Douglas’ budget, legalize gay marriage and deny Vermont Yankee a state license to operate. The way his campaign described it, Shumlin “gets tough things done.”

Of course, as critics now point out, Shumlin’s tough Yankee tactics inserted the legislature into a regulatory arena largely governed by the Public Service Board — an arena he now contends is inviolable to the political machinations of legislators and governors.

After the Public Service Board opened a docket in March 2008 to determine whether to allow Yankee to operate for 20 years beyond the expiration of its original license, Shumlin repeatedly fought for legislation that would curtail Yankee’s ability to stay open. That very month, Shumlin’s Senate passed a bill mandating a “comprehensive vertical audit” of the plant, and a year later it voted to force Yankee to fully fund decommissioning costs before the Public Service Board could grant a new license.

Shumlin’s biggest anti-Yankee coup came in February 2010 when his Senate voted overwhelmingly against granting the plant a new license. Thanks to a 2006 law called Act 160, both houses of the legislature had to affirmatively approve an extension before the Public Service Board could grant a new license.

Lt. Gov. Phil Scott, who at the time was one of just four senators to oppose Shumlin by voting to send Yankee’s application to the Public Service Board, says he thought that vote improperly inserted the legislature into the process.

“I totally believe the Public Service Board is the right forum for these types of decisions,” he says. “I felt at the time that we were circumventing the process.”

In the past two weeks, Shumlin has repeatedly said he has never voted to tell the Public Service Board what to do. Asked during last Wednesday’s press conference if the 2010 relicensing vote contradicts that assertion, Shumlin made a very fine distinction: The legislature’s authority to give Yankee an up-or-down vote derives from Act 160, which was passed during the four years Shumlin was not in the Senate. With the 2010 vote, Shumlin argues, he was simply following existing law.

But Shumlin went further than that, calling into question whether he would even have voted for Act 160, the law that fueled his rise to the governorship and empowered him to deny Yankee a license.

“I’m not sure it was the smartest legislation,” he said of the law he is now fighting to uphold in federal court. “I’ve made clear before that had I been in the legislature — because I really feel strongly about this — I might have been uncomfortable with Act 160. I wasn’t here. I couldn’t vote on it.”

When Vermont Public Radio’s John Dillon asked whether he would have voted against Act 160, Shumlin said, “I don’t know.” Asked later in the week to clarify the governor’s stance on the law, aide Alex MacLean said, “It’s impossible to answer a hypothetical when he wasn’t in the Senate, didn’t hear all sides of the arguments and wasn’t immersed in the debate.”

All that obfuscating has merger opponents’ heads spinning. Baruth, who before his election to the Senate fought alongside Shumlin as an anti-Yankee activist, says he misses the Putney populist who used to fight out-of-state energy interests — the way the governor did at Saturday’s rally in Brattleboro.

“What I think this governor is beautiful at is standing up and saying very loudly that you have to protect Vermonters’ pocketbooks — but in this particular case, for whatever reason, he’s choosing not to deliver that message,” Baruth says. “I would like to see the Peter Shumlin that stands up and says, ‘You’re owed the money. Stand up and pay it back.’” 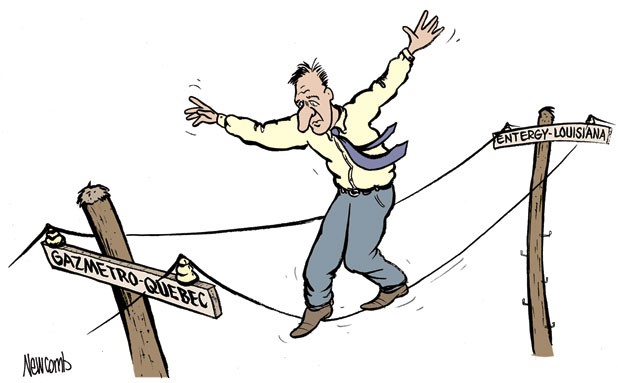