A primer on summer music in Vermont 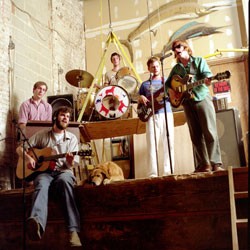 It’s almost summer, which in Vermont means one thing: It’s almost fall. Well, that, and the music-festival season is about to kick off in earnest. This summer these green hills will see — and hear — an almost overwhelming number of musical events. Fests of all sizes are scheduled for nearly every weekend at locations all over the state, from old favorites to new “frends.” Here’s a look at the season before us.

But wait, there’s more. Higher Ground is also continuing its beloved Concerts on the Green Series on the lawn of the Shelburne Museum. This series tends to skew a bit mellower than its livelier cousin on the Midway. This year’s slate includes Sarah McLachlan (June 24), David Gray (July 7) and Lyle Lovett (August 7). highergroundmusic.com

The Frendly Gathering is a festival started by a group of pro snowboarders who live by the cheeky motto “There is no I in frends.” There is, however, an “I” in Deer Tick, the Felice Brothers and Railroad Earth, all of whom will take the stage at this year’s fest. There’s no “I” in Dr. Dog, but they’ll be there, too, along with an eclectic mix of local and national bands. frendlygathering.com

Now in its 29th year, the tiny Rattling Brook Bluegrass Festival is among the longest-running musical events in Vermont. This one-day hootenanny — or is it a hoedown? — will feature some fine picking talent, including Jimmy Gaudreau and Moondi Klein, Bluegrass Revisited, Big Spike Bluegrass, Cardigan Mountain Tradition, Bob Degree & the Bluegrass Storm, and the Modern Grass Quintet. belviderecommunityclub.org

Bad news, yogis: The Liberate Music and Yoga Festival isn’t happening this year. But that doesn’t mean those who like to Downward Dog to choice music are out of luck. Wanderlust, a traveling music and yoga festival that also makes stops in California, Colorado and Whistler, B.C., is returning to the Stratton Mountain Resort for the second consecutive year. This year’s fest includes music from Ziggy Marley, Ani DiFranco and the Barr Brothers, among many others, along with dozens of renowned yoga instructors and speakers. stratton.wanderlustfestival.com

Now entering its 16th year, Solarfest is both a music festival and a showcase for solar-energy education. This year’s lineup includes headliners the Wood Brothers and Sarah Lee Guthrie and Johnny Irion, and locals such as the Vermont Joy Parade, Gold Town and the Amida Bourbon Project. You can take a break from rocking to attend workshops and demonstrations devoted to promoting conservation and sustainable living. solarfest.org

Nestled in the rolling foothills along Route 100 in Stockbridge, the Tweed River Music Festival is a quintessential Vermont fest. There’s amazing natural scenery, great music and, of course, a swimmin’ hole. Irene hit the festival grounds pretty hard last summer, but the cleanup reportedly has left them even better suited to camping and summertime frolicking. Curated by local alt-country stalwarts Bow Thayer & Perfect Trainwreck, the typical lineup is an impressive, rootsy mix of rock, folk and Americana. The roster for this year’s fest was unavailable at press time, but announcements should be coming soon. tweedrivermusicfestival.com

Completely powered by renewable energy, the Valley Stage Festival in Huntington is yet another local event with ideals as lofty as the high harmonies emanating from the stage. The seventh annual VSF has a family-friendly atmosphere and great tunes — this year from After the Rodeo, the Woes, Phineas Gage and, appearing for the third time, headliners Rani Arbo & Daisy Mayhem. valleystage.net

The Manifestivus in Cabot bills itself as a “local festival with a global vibe.” And, for 10 years running, it has handily lived up to that designation. Curated by Afrofunk outfit Toubab Krewe, the fest features a heady blend of rock, funk, jazz, hip-hop and world music. According to the website, the 2012 lineup is “coming soon.” manifestivus.com

Last year, Grace Potter & the Nocturnals turned their annual homecoming gig at Burlington’s Waterfront Park into a two-day festival within a festival called Grand Point North. GPN, part of the Lake Champlain Maritime Festival, offered up big-name headliners as well as a slew of great local acts. The fest was a summer highlight. As a stand-alone event, this year’s Grand Point North promises to be even better. Joining Grace and co. are the Avett Brothers, Dr. Dog, Galactic and the Carolina Chocolate Drops, among many others. And, once again, local bands get to share the spotlight. grandpointnorth.com