Popcorn! Peepholes! Women Made of Steel! Step Right Up to Church of Circus 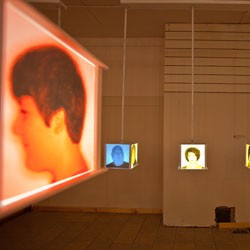 I’ve forgotten many of the great works my art history teacher made me memorize in high school, but I’ve never forgotten his directive each time he loaded us into a bus and drove an hour up the New Jersey Turnpike to the Metropolitan Museum of Art: Find something you like. Find somewhere to sit so you can see the thing you like. Stay there. Then go outside, buy yourself a hot dog and eat it on the steps. Repeat as desired.

Mr. McClellan said it was his way of avoiding Stendhal syndrome, the dizziness, fainting and hallucinations that the 19th-century French author Stendhal claimed to have experienced after too much exposure to beauty (he took a trip to Florence). For us, it was a license to approach art without fear.

I’m thinking of Mr. McClellan and his hot dogs Friday night while sitting on a low bench at 152 Cherry Street, the former site of Outdoor Gear Exchange, for the opening ofChurch of Circus. There are places to sit all over this spacious pop-up gallery, and in the middle of it all is a concession stand. People are shoveling popcorn into their faces and licking their sticky, cotton-candy-covered fingers.

I sit for a while with Burlington/Brooklyn artist Abby Manock’s “Space Farming in the Afterglow of Atlantis,” an installation that fills most of the front section of the space where women’s clothing used to be. Manock created a landscape of bricks, wooden posts and paint cans, each object tied to at least one other with what look like strips of a red wool scarf. Tiny circus flags stand atop two of the tallest wooden posts, and white tent stakes appear plunged into the ground. The paint that spatters the top of each object is the color of popcorn, cotton candy and cherry slushies.

From where I’m sitting, I can watch Clarke Derbes on the sidewalk, adhering colorful vinyl tape to the gallery window. He starts one geometric pattern and then decides against it. He peels the tape off and starts over.

A quick trip to the bathroom reveals triangular, pink-and-black satin circus flags strung up all over the walls — I inspect the back of one to confirm that they’re not thongs. I wander through photographer Andy Duback’s “Cubes No. 1-9,” two rows of 10-inch white wooden cubes suspended from the ceiling. A different person’s head appears within each one — the front, back, right and left sides appearing on the corresponding panels and giving dimension to the term “head shot.” Each cube is backlit in a primary color.

R. Elliott Katz’s “Nonument II: Ecstasy of the Divine Ritual” makes me laugh. The installation features a full-size, white-painted oven and kitchen cabinet suspended side by side from the ceiling, golden rays of Styrofoam shooting out behind them. Their doors and drawers are flung open to reveal pictures of the items they might one day contain: various cooking tools, a jug of maple syrup, and a mysterious photograph of a hand giving the finger to a plate of hard-boiled eggs and vegetables.

I’m tempted to turn the crank on the wooden toys that make up Nancy Dwyer’s “Thinking Machine.” Later in the evening, everybody’s doing it, so I join in. Each one is the same: The words “IF” and “THEN” are carved on two sides of the same block. As it spins, the words trade places, over and over.

Next, I wander through Kat Clear’s steel and found-object sculptures of small elephants and aerial performers in various postures. Clear is the ringleader and inspiration for this circus, a project that grew out of her Barbara Smail residency at the BCA Center this year. I marvel at Clear’s ability to make heavy metal appear to take flight. Her “Begeena Sisters” are all sexy bike-chain legs in fishnet stockings made of metal grating. One dons a bristly tutu while balancing on a tricycle.

By the end of the night, people are streaming in and out of Wylie Sofia Garcia’s “Thimbelina: Blow Off” installation, which occupies the former OGE’s three dressing rooms, hidden behind a circus tent façade. All the doors are locked, but we’re invited to peer through cracks and peep holes to catch a glimpse of a strawberry-blond-wigged mannequin, sequined dresses and flowers in the first stall; something more abstract and dark in the second; and a tiny video screen in the third that plays a clip of … a woman getting undressed? Two women undressing each other? People having sex? It’s hard to tell through such a tiny peephole — and that’s the fun of it.

The 10 artists behind this monthlong show set out to create a temporary downtown exhibit that would make art accessible and strip away the intimidation factor of a gallery. And, while they may not draw viewers suffering from coulrophobia — fear of clowns — it seems these artists are right on track.

I’m ready for a hot dog.