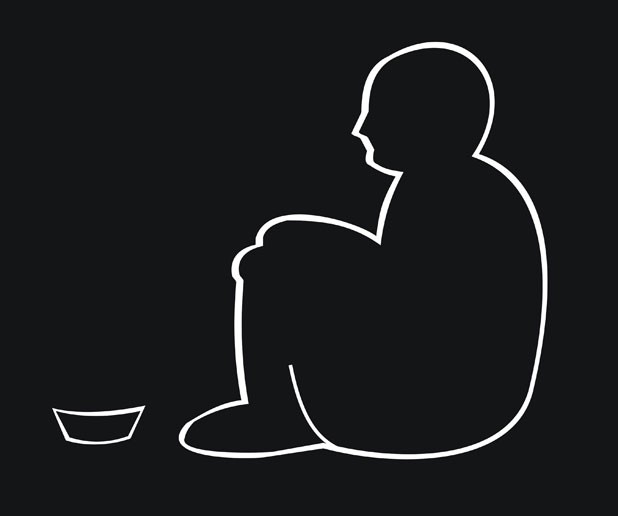 “Extending welfare to work benefits without interruption for a lifetime does nothing to actually encourage people to get a job,” declared Gov. Peter Shumlin in his budget address last week. “[I]t is neither compassionate nor prudent to continue a system in which struggling Vermonters are financially punished for getting off government assistance, finding a job and providing for their children by going to work.”

The governor’s compassionate, prudent alternative: Punish struggling Vermonters for not finding a job.

For a decade and a half, Vermont had held out against the cruelest irrationality of “welfare reform”: its time limit on aid. It was long past time to screw up the “courage” to speak the truth, Shumlin said, “Benefits for Vermonters who are able to work must be temporary, not timeless.”

Vermont must join the rest of the country in putting the “temporary” in Temporary Assistance for Needy Families (TANF), the welfare-to-work program for people with children, said the governor. Recipients should be booted after five years total, regardless of the economy’s ability to provide jobs or employers’ willingness to pay enough to support a family. This from a man whose sole impediment in life was dyslexia.

The proposal is part of Gov. Shumlin’s program to “grow jobs and secure prosperity for our children.”

Like President Bill Clinton, who claims he “ended welfare as we know it” by signing the Republican-authored Personal Responsibility and Work Opportunity Reconciliation Act of 1996, Shumlin would rewrite poor people’s fate to unburden the taxpayer and justify it as good social policy. Like Clinton, the man the Nation hails as the country’s “most valuable [progressive] governor” is helping to propagate the fiction that welfare makes people poor.

Here’s the logic: When benefits become too generous (as Shumlin implied Vermont’s are), they’re more attractive than working. Housing subsidies and free medical care are bait; their open-ended supply is the trap. Once snared, poor people descend into passivity. “This is one of the cruelest features of the welfare system,” Senate Finance Chair Bill Roth (R-Del.) lamented during the 1996 Congressional debate, “because it saps the human spirit.”

That argument is still going strong. “The more benefits the government provides, the stronger the disincentive to work,” Rep. Geoff Davis (R-Ky.) told a House subcommittee last summer, when the GOP was contending that President Obama had gutted TANF’s work requirement (Politifact’s verdict on the claim: “pants on fire”).

Commented the Heritage Foundation’s Michael G. Franc in the National Review: “Less work and lower earnings, in turn, translate into greater dependency on the government — and zero or even downward social and economic mobility for those mired in poverty.”

Neither Franc nor Davis mentioned the downward mobility of practically everyone over the last two decades.

Because it destroys people spiritually, the argument continues, welfare is not compassionate either for adult recipients or their children. Welfare reform will “help free families from the present welfare trap,” Roth said in ’96, “and save future generations from its effects.”

“One of the most important values that you can pass on to your children is a work ethic,” Rick Santorum, the 1996 junior senator from Pennsylvania and one of the 96 welfare bill’s most zealous sponsors, told the Senate. “So we require work because we think that is a value that is important for people to exit poverty.” He later called it “tough love.”

Note that Santorum said the “value” is important, not the paycheck. Work is ennobling above all else — more ennobling than, say, caring for your kids — even if the job is degrading, dangerous or pitifully paid. “Any job is a good job” was the slogan posted on the walls of welfare agencies after passage of the 1996 law.

“There is no better social program than a good-paying job,” said Shumlin in his recent address, echoing Ronald Reagan. The contention is hard to dispute. But at the end of 2012, Vermont had 4000 fewer jobs than it did before the recession. Most new positions are in the service sector — meaning crappy pay, irregular hours, no benefits and no security. A 40-hour week — if you can get 40 — at Vermont’s minimum wage earns you $1396 a month, about $200 under the poverty line for a mother with two kids. Chip away at the Earned Income Tax Credit, which the governor would do to pay for childcare, and you have to ask: Where’s the disincentive — welfare or the job?

Shumlin was reassuring: “We will not allow vulnerable Vermonters, such as those who are disabled, to fall through the cracks, but we will ask those who can work to get the training and support, they need and get a job.”

For the record, such requirements are already in place. But Shumlin also could have been channeling Santorum.: “We’re going to help people, but, at some point in time, we expect them to go out and help themselves,” the senator told PBS in 1996.

“No one is going to fall through the cracks here.”

In fact, in the five years after welfare reform — a prosperous time — millions moved off the welfare rolls and found work. But there was no evidence that they were less poor, or their kids better off.

People also fell through the cracks — and now, in harder times, more are falling. Last year, Jason DeParle reported in the New York Times that single mothers dropped from cash assistance were selling blood, shoplifting, collecting bottles and cans and returning to violent partners to survive — “all with children in tow.” He noted that the number of very poor families is growing: A quarter of low-income single mothers nationwide — about 1.5 million — had neither jobs nor aid. That’s twice the rate under the old welfare law.

These ideas are hardly new: that charity, not poverty, destroys people; that the poor can be divided into the truly vulnerable and the slackers. Henry VIII’s law distinguished the “impotent” (deserving) beggar from the “sturdy.” Caught too often with his hand out, the latter went to the gallows.

The authors of Britain’s New Poor Law of 1834, reputedly more humane than its predecessor, sought to prevent the evils the earlier policies had allegedly created: laziness, drunkenness and profligate childbearing. Additional alms for each hungry mouth encouraged men to “early and improvident marriages,” they claimed.

The framers of the 1996 U.S. law agreed — with equally scant evidence — though their money-grubbing reproducers were unwed mothers. Prevent matrimony or compel it, the “solution” was the same: Cap assistance after a certain number of kids. And if the babies are hungry? Let them eat ideology.

Welfare law is based on the idea that the poor are different from you and me — they are feckless, immature and corrupt, and in need of guidance, surveillance and correction. Each wave of reform is a new curative regime for this personal deviance.

Yes, poverty can fuck a person up. But, said the civil rights organizer Bayard Rustin, “There is only one difference between a man who is rich and a man who is poor. One has money and one does not.”

To admit that the poor are poor because they are in want of money; that they are in want of money because their work does not pay enough; and that their work does not pay enough because higher wages would cut into the profits of their employers — all this would force us to be political rather than psychological about welfare. A mandated livable wage and family allowance would assuage desperation and embolden workers to demand higher pay and better conditions. The blame would have to shift from poor people to the rich people who benefit from their poverty, from the programs that (barely) help them to the system that screws them.