Bird accessories? It's an idea that could fly 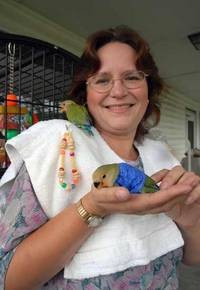 There’s something bird-brained about Susan Golden’s side business. And that’s a good thing. Under the company name Golden Perch Bird Supply, the 43-year-old Plainfield woman has launched a line of bird accessories that address the delicate issue of bird droppings. Or, in not-so-delicate terms, how to avoid being shat on when Polly is perched on your shoulder and handle it when you are.

For the non-bird owner, this is probably not a pressing concern. But the little mishaps can befall bird enthusiasts daily, though Golden says feathered folk give warning signs before they let loose. Anyone who has been its recipient knows that bird poop is an unpleasant, watery mess, which Golden describes in perhaps overly colorful terms. “I have a Lorikeet, which is a nectar-eating bird, and their droppings are very liquid,” she offers.

To demonstrate, Golden unwraps one of her white terry-cloth Pooh-Pooh Protectors, which come in human sizes “small” to “extra-large.” She drapes it over her shoulder, fastening the single button.

As a fashion accessory the PPP won’t win any awards. Its beauty rests in its simple design and multiple functions. Should Polly poop, the mess is absorbed by the terry cloth — before it reaches your bare shoulder or clothes. Think spit-up rag. After a spin in the washer and dryer, the soiled Pooh-Pooh Protector is ready for re-use.

It also serves as a buffer between human flesh and bird talon. “I find that in the summer a lot of times, when you’re wearing tank tops, their toenails will really scratch the heck out of you,” Golden explains with a grimace. The front of the protector features two loops through which the handler can attach toys and treats.

On the backside of the Pooh-Pooh Protectors is a catch basin of sorts for discarded seed husks. Presumably birds spit to the rear. (Writer Dorothy Parker had a canary named Onan. “Why Onan?” she was asked. “Because he’s forever spilling his seed.”)

Should Polly shun the Pooh-Pooh Protector and let loose on your sofa or carpet, Golden has the solution to that problem, too: a spray-bottle cleaning system with the no-nonsense name Poop Lifter. Of her special formula, she says, “It really works well. Bird poop can stain, it can stick, and it can be very difficult to remove. If you get it on your clothes, this stuff will get it off.”

What about the birds’ clothes? Golden also makes a Pluck-No-More Feather Protector to guard against avian self-mutilation. By all appearances, it’s a tiny straitjacket that slips over the bird’s head, covering its wings and torso. This hand-sewn garment looks much like a Barbie doll dress. Thus attired, Polly can’t get at her belly feathers.

Golden’s brochure warns owners, “Initially your bird will demonstrate uncooperativeness, so we suggest gradually increasing wear time daily during the adjustment period.” The brochure also suggests that owners monitor their birds, noting that they “might rebel, pout, try to make you feel guilty and/or manipulate you into removing [the device].”

If all this bird paraphernalia sounds overly indulgent, keep in mind that roughly 6 percent of the U.S. population keeps one or more birds as pets, and that the pet-supply market, including that for birds, is a booming business. (A recent AP story reveals an odd related trend: An increasing number of Americans are now keeping chickens as pets.) Golden’s company slogan: “Where we treat your bird like royalty.”

Golden herself has close to 40 birds, ranging from very small gouldian finches to a pair of scarlet macaws named Fred and Wilma. By comparison, the bird department at the Williston PetSmart has a current total of 43 birds for sale. On hearing Golden’s current count, the salesclerk remarked, “Wow. That’s seems a bit excessive.”

And expensive. Golden goes through about 200 pounds of seed each month. But birds require more than seed alone: They need a varied diet that includes fruits and vegetables. “They can basically eat anything a person is eating as long as it’s healthy, not McDonald’s and all that stuff. They can’t have chocolate, avocado or alcohol,” Golden adds.

Is it worth the trouble? Birds have always been a big part of Golden’s life. Her mother raised canaries. Two of her birds have an uncanny ability to mimic voices and sounds — among them the ring tone of her cell phone, the beep of the microwave, Golden’s own distinctive laugh and her son’s voice. She tells of a Poltergeist-like experience that happened one morning after she watched her younger son leave on the school bus. Back in the house she heard “Mom? Mom?” It was one of the birds. Golden swears the animal was smiling.

In addition to running her business, Golden works for Washington Electrical Cooperative in East Montpelier and Pet Deli — All About Pets in Berlin. Although she’s hoping her Golden Perch Bird Supply Company, currently an online venture — the website will be live in a month — will be profitable, she says one of the reasons she started it was to be a source for other bird people in the area.

“It’s been a dream for me because I do love birds. I’m not looking to make a ton of money. I’m making it easier for people to find things. There are other crazy people like me. I’m not alone,” she says, as she packs up her box of supplies and heads home to her flock.