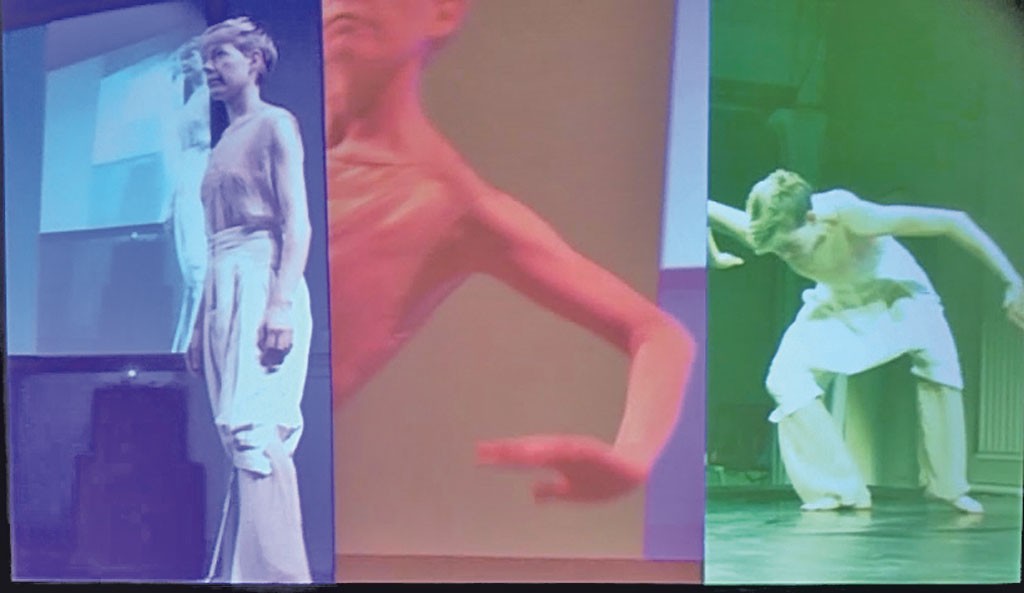 Art comes off the walls of the Helen Day Art Center's East Gallery this month with an exhibit that is anything but stationary. "In No Time: A Retrospective of Ideas in the Choreography of Polly Motley" is a largely improvised dance, video, sound and set installation that will develop in twice-weekly performances from September 19 through October 19. It will be open for public viewing during normal gallery hours.

"It's the first time we're bringing performance into the gallery as installation, as a normal, exhibition-length show," says curator Rachel Moore. "It's a new perspective.

"It's not that it hasn't been done before," she adds, noting a general trend of performance-based installation. Motley herself has danced through Helen Day's grounds — and on its rooftops — in past events. "But it is not usual to have a performer occupy the gallery for a monthlong exhibition," Moore says. "It's fresh and current, and the way Polly does it is different."

"Different" and "not usual" are certainly words one could use to describe Polly Motley's art. The critically acclaimed contemporary dancer and choreographer, now 64, has been dancing since she was 4; she studied classical ballet and jazz dance throughout her childhood. But by age 15, Motley recalls, she knew her heart was in contemporary and experimental dance.

"I was trained in some very classical and formal disciplines," she says. "But then, in the late '60s, early '70s, feminism was happening, the world was changing, and along with it came radical forms of performance and installation art and video art. So the work I do now is as influenced by various genres of performance and video and installation art as by [classical dance]."

On one occasion, for example, Motley and her collaborators took over the River Arts Center in Morrisville with a three-hour piece titled "Critical State." Movement artists simultaneously performed in different rooms; sound, lighting and sets were highly stylized; and video monitors captured, and distorted, all the action.

"Everything I do these days is collaborative," Motley says. Since moving to Vermont in the early 1990s, she's formed tight artistic bonds. On the program of "In No Time" are longtime friends and collaborators including Vermont dancers Paul Besaw and Willow Wonder, composers Sean Clute and John King and video artist Molly Davies, who is Motley's life partner.

Something similar to "Critical State" will unfold in the East Gallery over the next four weeks, but it's hard to say exactly what. For one thing, Motley points out, everything is improvised: not just the dancers' movements, but the sound and video, as well (though some pieces have predetermined structure in the form of scores or set elements, such as a ladder).

"The video and the sound artists have a set batch of information from which they draw, but how they put it together is different every time," Motley explains. "There are various kinds of collected acoustic and electric sounds that the sound guy will draw from, so he's not walking in with nothing, and Molly has images. But she's organizing those based on what's happening in the moment — whether the dance is vigorous or quiet, what the sound guy is doing. The people are all listening to each other and paying attention to each other and responding to each other."

Though "In No Time" is subtitled "A Retrospective of Ideas," Motley insists that the piece is an ever-evolving and forward-moving creative process, not a look back.

"I feel like the retrospective has already happened as a result of preparing for this," she says. "And now I'm clearer about what the ideas have been, and we're making new work based on it."

"In No Time: A Retrospective of Ideas in the Choreography of Polly Motley," Friday, September 19, through Sunday, October 19, at the Helen Day Art Center in Stowe. Evening performances, Fridays, 6 p.m.; movement laboratories, Sundays, 11 a.m. to 1 p.m.; installation performances, Sundays, 2 to 5 p.m. helenday.com