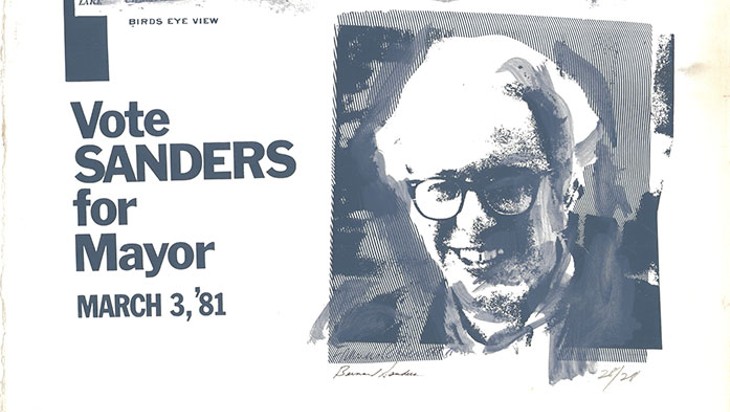 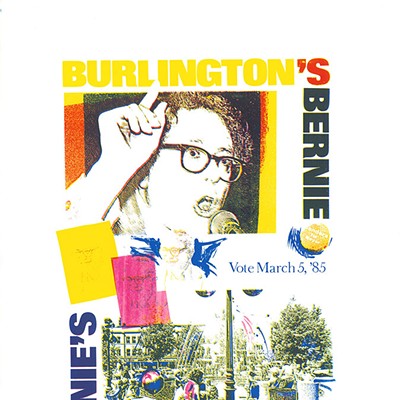 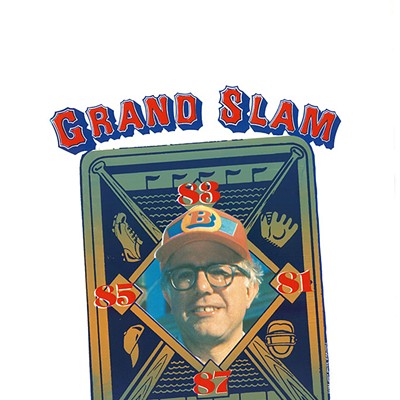 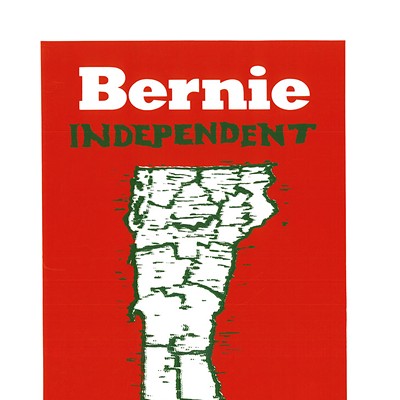 The Rutland-born painter was an associate professor of art at the University of Vermont from 1970 until his death in 1992. Even before Sanders appeared on the scene, Hewitt was no stranger to controversy: He made his first national splash in 1965, when the radical Anonima Group, which he had cofounded in Cleveland, had a collaborative show at New York's Museum of Modern Art.

During his time at UVM, Hewitt ventured into political art to assist the electoral ambitions of his friend and fellow progressive, Bernie Sanders. Their sons were friends, too: Levi Sanders and Corin Hewitt spent a lot of time shooting hoops at the Hewitts' Henry Street house in Burlington.

Hewitt made silk-screened posters for each of Sanders' mayoral races, 1981 through 1987, and for his run for the U.S. Congress in 1990. These weren't lawn signs but frame-worthy populist artworks, signed by the artist and the politician, that were auctioned to raise money for Sanders' campaigns.

Hewitt died long before his friend would run for Senate, much less president of the United States. But the artist's family and friends have saved those posters and remember the process behind them.

Karen Hewitt, Frank's widow, still has some of the pillowcase-size posters stacked flat in wide drawers in the bright attic workroom where she designs wooden toys. She told Seven Days she would give the artworks to Sanders' presidential campaign "if there was any way to make these helpful. I would do anything to help Bernie."

Burlington graphic artist Michael Patterson collaborated with Hewitt on the posters, although he stressed, "All of these came out of Frank's head." Inspired by Sanders' high national visibility, the longtime owner of Patterson Ads recently pulled out his own collection of the posters to revisit them.

Patterson said he was "a printmaking student" at UVM when Hewitt approached him looking for help on the poster project. It was 1981, and Sanders was making his first bid for mayor.

"The big issue that election was a real-estate mogul's plan to develop Burlington's waterfront, then pretty much a weedy landscape of abandoned industrial buildings, junked railroad cars and big, rusty petroleum tanks," Patterson wrote in a 2009 blog post about Hewitt's first Bernie poster.

His concept for the poster was a map of Burlington labeled "Burlington is not for sale," plus an inset image of a smiling Sanders and the instruction to "Vote Sanders for Mayor."

Patterson had a screen-printing setup in the basement of his home in Winooski, he recalled. So Hewitt came over with a stack of positive films. "We Scotch-taped them together into the composition," Patterson explained. "We exposed a stencil film with a sun lamp shining through our taped-up master and pulled a few dozen prints.

"Then Frank worked into the still-soft ink on most of the prints with thinner and a brush, creating the soft, washy effects," he added. That made each print unique.

Sanders, of course, won that historic 1981 race — and he was reelected three times. For his subsequent campaign posters, Patterson said he helped Hewitt put together the film images for the masters, but they were printed commercially.

Doreen Kraft, executive director of Burlington City Arts, said Hewitt saw art as a communication tool and a way to build community. "Bernie's election, to him, was very significant," she said.

One of Sanders' first moves as mayor was to set up a volunteer arts task force, and Hewitt was one of the original members. The group, which became known as the Mayor's Arts Council, "turned the lobby of city hall into a gallery," Kraft remembered. It also established a Thursday-night summer concert series in Battery Park, for which Hewitt created an image depicting a vivid pink sunset over Lake Champlain. (In 1983, the Burlington City Council voted to fund the arts group and hired Kraft as a part-time coordinator; seven years later, it would evolve into Burlington City Arts.)

Kraft, who also owns several of the '80s Bernie posters, described them as bold political statements done by an artist in a playful, creative style. The second and third mayoral posters reminded voters of Sanders' commitment to the city with the slogan "Bernie for Burlington." As Sanders sought a fourth term, Hewitt's poster celebrated his accomplishments with a baseball analogy: "a grand slam for Burlington." The poster also reminded Burlington voters that Sanders had brought a Double-A minor-league baseball team to the city.

Hewitt created a fifth poster in 1990, when Sanders made his second run for Vermont's sole seat in the U.S. House of Representatives. His win launched a 25-year (and counting) career in Washington, D.C., that Sanders is now hoping to top with a move to the White House.

Art is part of that effort, too. Artists such as Richard J Oliver and dug Nap have already contributed pieces to Sanders' presidential campaign that will be printed as limited editions. "We have a policy that explains what we can accept from artists," said Michael Briggs, campaign communications director. The prints by Oliver, Nap and other artists will be displayed in shows around the country and then auctioned, he added. The maximum price for an artwork will be $2,700, the limit on an individual campaign donation.

Back in Burlington, the possessors of Sanders' early political posters cherish them all the more now that he is on the national stage, Kraft said. "There are people who would like to collect these things right now," she noted, "because Bernie is very cool and Frank's work has currency."