About five years ago, Damon Brink and a couple of partners bought out the venerable Nectar Rorris and became the new owners of Nectar's Lounge and Restaurant. The town held its collective breath.

Nectars, with its inimitable rotating orange neon sign, is the heart and soul of downtown Burlington. True, it had grown a little shabby over the last few year's of Rorris' stewardship, but I don't think anyone desired a radical change; the place was just too perfect, from the memories of early Phish to the velvet brown gravy - vats and vats over the years.

Well, Damon and his mates did great. The place has been sensitively refurbished and refreshed; the character kept intact in all the important ways. Best of all, Nectars has reestablished its place at the heart of the downtown music scene.

A couple of weeks ago, a huge political campaign sign appeared in the front window. It read, "Ron Paul 2008." 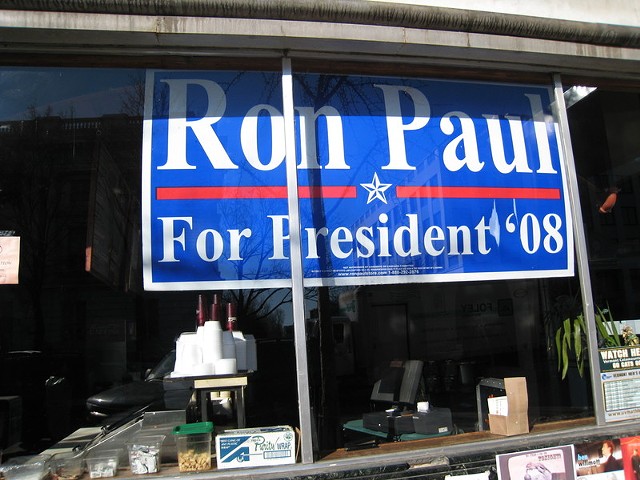 I don't support Ron Paul, although I do appreciate his convictions and forthrightness. I find his libertarian viewpoint - trim government, leave us alone - to be unsuited for the modern, global world. For better or worse, I believe, we (all the people of the world) are on this boat together, and it is only through collective action can the pressing problems of the age be effectively addressed.

But never mind that. My problem with the Ron Paul sign is not my feelings about Ron Paul. I just don't think it's appropriate for a retail store, particularly a public gathering space like Nectars. I think that the owners are forcing, in a way, their personal politics on their customers, making them feel like, by patronizing the establishment, they are endorsing the views of the owners.

Well, I emailed to Damon and he wrote back. He made some really good points, particularly about his not wanting to separate his public and private selves, and about the Ron Paul sign being a spur to further conversation and debate. Though I still disagree with him about the propriety of the sign, I came away impressed with his thoughtfulness and honesty.

What do you think about political signage in store windows? Maybe my thinking needs to evolve on this one . . .