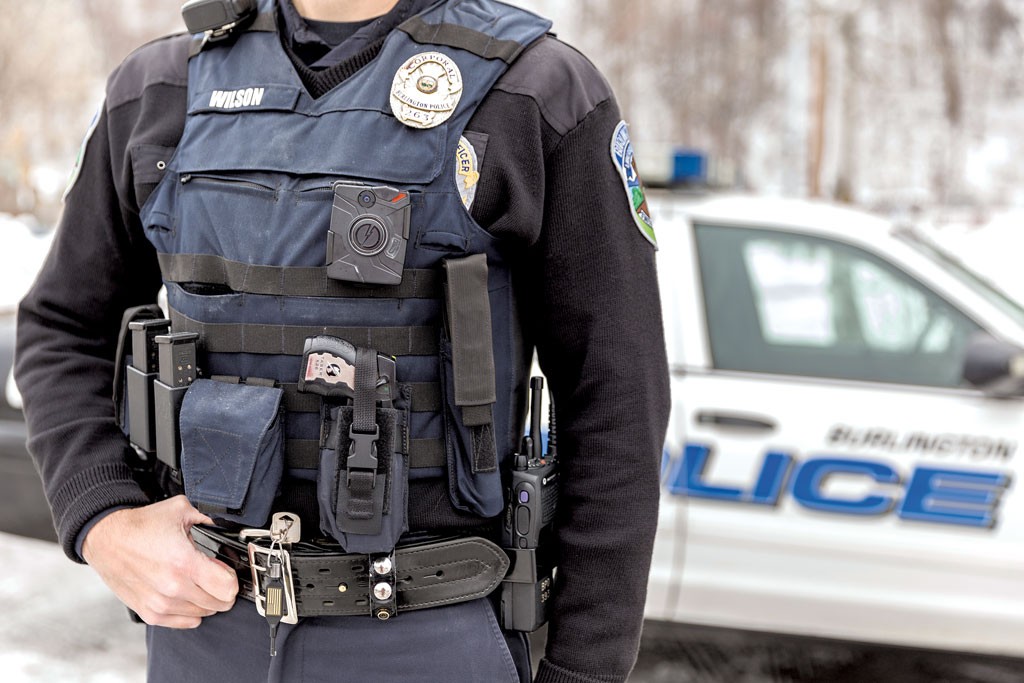 In early November, a video that quickly went viral showed Burlington police officers using force against a seemingly defenseless man lying in the middle of the street. A witness used a cellphone to record a cop repeatedly striking the man, whose hands appeared to be underneath him. The video received widespread media coverage, and many questioned whether the police used excessive force.

Burlington police insisted they had done nothing wrong. To support their argument, they released their own video of the incident.

Captured on a body camera worn by a backup officer on the scene, the police video showed a more volatile scene than the witness-shot footage, with at least a dozen bystanders pouring out of a bar close to where officers were trying to handcuff the man. It also showed officers chatting amiably with some witnesses shortly after the arrest. The police videos, along with other details released by the department, helped quell the public outcry.

The incident was the first major test of an initiative that will soon become a permanent policy in Queen City policing. By the end of December, every Burlington police officer will wear a video camera and be under orders to film potentially confrontational situations.

A handful of Burlington's police officers have been wearing cameras as part of a two-year pilot project, the results of which have bolstered the department's plan to equip the entire department with body cams.

Police body cameras have recently received national attention after widespread protests of the police killings of unarmed black citizens in Ferguson, Mo., and New York City. President Barack Obama proposed spending $75 million to help outfit 50,000 officers with body cameras in an effort to rebuild trust between the public and the police. "This is not a problem just of Ferguson, Mo.," Obama said in a statement. "This is a national problem. But it's a solvable problem."

It is hard to find anyone in Vermont who thinks outfitting police with body cameras is a bad idea. Defense attorneys and police critics say cameras solve the problem of "he said, she said" testimony. Law-enforcement officials say body-mounted cameras can support the actions of police — and avoid excessive-force arguments. "It provides the best evidence for everybody," Chittenden County State's Attorney T.J. Donovan said. "It provides trust and transparency."

However, officials acknowledge that it is unclear whether the public will have access to videos of controversial police encounters.

Historically, Vermont police agencies have been loath to release records that involve allegations of officers violating the law. Along those lines, law-enforcement officials say they haven't created guidelines for releasing body-camera footage to the public, but are weighing several exemptions they could employ to keep records confidential.

For example, Burlington Police Chief Mike Schirling said he could refuse to publicly release videos that identify victims or witnesses related to a criminal case.

Asked if the department would release videos in which officers appear to use excessive force, Schirling replied, "I don't know the answer to that. That is going to be the biggest challenge, the balance between privacy and the public's right to know."

Attorney General Bill Sorrell is against releasing videos captured by police cruiser cameras; in one case, he opposed an attorney's request to release a video of then-state auditor Tom Salmon being stopped and investigated for driving under the influence in 2010. Though Salmon's case had already ended in a plea deal, Sorrell argued that the release of the video, which occurred despite his objection, could threaten the integrity of criminal prosecutions and set a "dangerous precedent."

Donovan acknowledged that protocols for releasing police recordings to the public have yet to be worked out. "Practices should be developed about that," Donovan said.

"There has to be a stated policy to what extent body cameras are public record or are evidence that you acquire during discovery," St. Johnsbury defense attorney David Sleigh said. "Every criminal case by definition is current litigation — except when police feel like releasing information when it makes them look good."

Schirling said footage from the November incident in Burlington does not have any "evidentiary value" in the ongoing cases against the men arrested that night. At the prosecutors' request, his department is withholding additional footage that is considered evidence, he said, even though it reflects favorably on his officers.

Schirling said that he would use Vermont's public records law as a guide for generating video protocols, which includes several exemptions for records that "interfere with enforcement proceedings" and could therefore deprive someone of a fair trial.

Meanwhile, the main benefit of police body cams may have nothing to do with the footage they generate. Studies suggest that cameras increase accountability and make both cops and citizens less likely to act inappropriately.

In Rialto, Calif., use of police force fell by 60 percent, and citizen complaints dropped 88 percent, after cops started wearing cameras, according to a study from the University of Cambridge's Institute of Criminology. Last year Taser International CEO Rick Smith told Vermont lawmakers that improper Taser use dropped 60 percent when officers were wearing cameras.

"They're useful because of the deterrent effect," said Hinesburg defense attorney Robert Appel, who has sued police in use-of-force cases. "They have the effect of making people behave, because nobody wants to look like an asshole on camera."

Sleigh agreed, referring to the camera as a "prophylactic device," more likely to preempt bad behavior than to give the public a view into police activities.

Schirling concurred. "The process of recording something alters what's happening, which is exactly what we want to happen," he said.

The wallet-size cameras are worn on officers' chests and are activated under specific circumstances: during arrests, traffic stops and mental health calls; when responding to a reported crime; and for calls "reasonably foreseeable" to lead to confrontations.

Schirling said that the cameras don't run constantly because the batteries don't last long, and storing video from all 65 officers' 10-hour shifts would be too pricey to maintain. At present, Burlington police have paid $30,000 for 60 cameras and one year of video storage and maintenance.

Some critics don't like the idea that officers get to decide when and what to shoot.

"We think the use of body cameras is a good idea, as long as they can't be turned off whenever an officer wants to," said Allen Gilbert, executive director of the Vermont chapter of the American Civil Liberties Union. "There are examples of stuff that you want to see on a video camera. All of a sudden it's not there."

Schirling said that he hopes future cameras will record ceaselessly and storage space will be more affordable.

"If the technology allows for that, that's exactly what we want to do," Schirling said. "The technology will evolve. In 10 years, you will hear officers say, 'I can't go on the road; my camera is broken.'"

In Burlington, police footage deemed unimportant is deleted after 90 days. Videos of any arrest, or any incident that could lead to criminal charges or additional investigation, are kept indefinitely, Schirling said. Officers and supervisors have access to the footage, which is routinely released to defense attorneys during court proceedings. Schirling said the department does not alter its police-cam footage.

Of the roughly 35,000 incidents Burlington police have responded to this year, 70 involved officers using force, according to Schirling.

He said those officers equipped with companion cameras welcomed them. Of those without, "We had them saying, 'We want them now,'" he said. "They don't want to face criticism for things they shouldn't be criticized for ... Hyper-scrutinized does not to begin to describe the nature of today's environment."

Case in point: In 2013, Winooski police began wearing body cameras after a confrontation was recorded by a passerby — but not the cops. During the incident, a Winooski officer shot a mentally ill man in the leg and subsequently faced a criminal charge. A passerby captured the incident on a cellphone camera but failed to record any events leading up to the shooting.

At the time, former Winooski police chief Steve McQueen told WCAX he regretted that the shooting wasn't filmed by an officer, saying that body-cam footage could lend context to police encounters with the mentally ill.

Elsewhere in Vermont, Hartford police outfitted patrol officers with cameras four years ago, after officers were accused of racial bias for beating a naked, semiconscious black man inside his own home. The officers were responding to a mistaken burglary report called in by the victim's housekeeper, who did not recognize the man.

Vail said he has reviewed footage in roughly 20 citizen complaints against officers. In most cases the video exonerated the officer of wrongdoing, while in roughly five cases the video showed that the officer "could have handled it better, or violated procedures." In response, Vail said, he has disciplined officers, though none have been fired or charged with a crime.

The department just signed a five-year contract for cameras, storage and software for $45,000, Vail said.

The ACLU's Gilbert said he is optimistic that body cameras will "increase police accountability" and improve relations between law enforcement and the public.

Not a moment too soon. Last Friday, hundreds of people gathered on Burlington's Church Street to protest the recent police shootings in Ferguson and New York City.

"A true record is a true record," Gilbert said. "You can't hide behind your version of events."