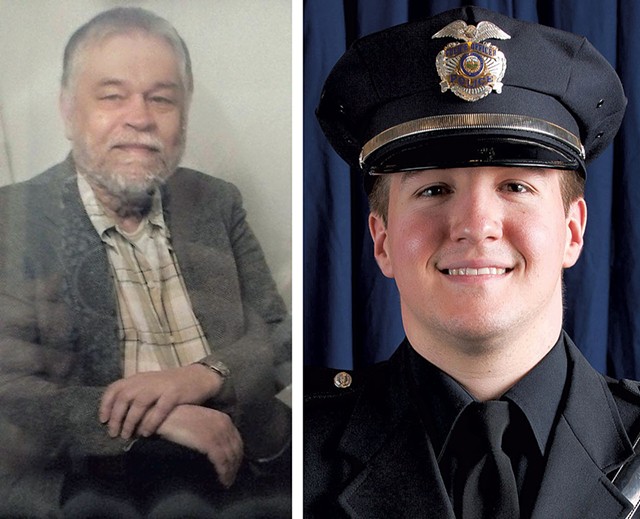 Vermont mental health experts reacted with a sense of weary frustration to the news last week that a Burlington police officer shot and killed a 76-year-old paranoid schizophrenic. It was like reading a familiar script, they said: The protagonist, Ralph "Phil" Grenon, suffered from what was widely understood to be a psychological breakdown; the health care system was unable to provide effective intervention; and police officers later insisted they could not avoid a confrontation that turned fatal.

"It seems like every six months or so, someone with a severe mental illness is being severely injured or killed by police," said A.J. Ruben, supervising attorney for Disabilities Rights Vermont, a nonprofit agency that advocates for the disabled. "And we hear every month that the mental health system is in crisis. The story is the same."

Burlington Police Chief Brandon del Pozo, who commanded the police response from outside Grenon's South Square apartment building on College Street, defended his department's response. He noted that police engaged in a five-hour standoff with Grenon, made dozens of attempts to negotiate and deployed weapons other than firearms, including stun guns, in hopes of subduing him. It was only after a knife-wielding Grenon lunged at police that an officer shot him dead, del Pozo said.

"This whole thing started as an effort to deliver services to Mr. Grenon," del Pozo said. "If we could turn back time, we would. We made the absolute best plan we could, based on the practices that prevail in modern policing."

But critics say it could be time to revise the rules governing police use of force and to encourage police to back away from mentally ill people and wait out their crises.

The shooting may have been technically valid, "but that isn't really the question," said Rep. Anne Donahue (R-Northfield), an authority on mental health issues. The question, Donahue said, is: "What led to that point, and did it ever have to happen?" She added, "This was a guy hunkering down, not a threat to anybody else. And yet they were trying to smoke him out, moving in and invading his space so he was backed into a corner. That would have only increased his fear and paranoia."

Chittenden Superior Court records show that he was charged with unlawful trespass in 2009 after entering a Kinko's in Burlington and allegedly harassing customers.

A judge sent Grenon for a psychiatric evaluation at the former Vermont State Hospital in Waterbury, where Grenon had "several aggressive episodes," and he was involuntarily medicated, according to court records. A judge deemed Grenon incompetent to stand trial and ordered him hospitalized for up to 90 days. Prosecutors dropped the charge.

"He says he is not ill and that any talk to the contrary shows a conspiracy," psychiatrist Richard Munson wrote to the court.

Grenon does not appear to have been arrested in Burlington again, but police and mental health crisis workers were well acquainted with him in the months before he was killed, according to Burlington police records obtained by Seven Days.

At 4 a.m. on February 20, neighbors in South Square Apartments, a Burlington Housing Authority complex for the elderly and disabled, called police to complain that Grenon was yelling, seemingly at himself. Officer Darren Kennedy knocked on Grenon's door, but he didn't respond. A neighbor told Kennedy that Grenon had likely seen his cruiser and purposely avoided answering, according to police records.

The neighbor said Grenon needed to be hospitalized. Kennedy explained that he couldn't take Grenon into custody unless Grenon was suicidal or voluntarily agreed to seek treatment.

"Well, maybe if you talked to him, he would assault you, and you could arrest him then," the neighbor suggested, according to Kennedy's report.

"I explained ... that I did not wish to get assaulted," Kennedy wrote.

Two days later, on February 22, another officer was dispatched to Grenon's apartment at the request of mental health crisis workers, according to police records. Officer Casey Lee knocked on Grenon's door.

"He opened the door on the second attempt and yelled at me to, 'Stay the fuck away from my door,''" Lee wrote. Grenon could then be heard yelling inside his apartment.

On March 12, neighbors called police and said Grenon was yelling and seemed to be hallucinating in a hallway. Then he retreated to his apartment and refused to answer his door. Police notified the Street Outreach Team, a group of counselors tasked with caring for the mentally ill in Burlington, and the Burlington Housing Authority, which manages the building.

Grenon had occasionally caused problems in the building since 2009, according to Paul Dettman, the authority's executive director. In recent months, he began making direct threats to staff and fellow residents.

A week or so before Grenon's death, housing authority officials gave him a letter requiring him to leave within 30 days. "When he got the termination notice, he told someone, 'This is war, and someone is going to die, and it's not going to be me,'" Dettman said.

South Square resident Charlie Messing said he considered Grenon a friend. When Grenon was on his psychiatric medication, Messing said, he was a warm, friendly man eager to chat up fellow residents. Grenon spoke fondly of time he spent in Paris, Messing recalled.

But recently, Grenon would yell at Messing and others when they passed by, and he would stare them down.

"I'd say 'Hello' like normal, and he'd say, 'Don't speak to me. What are you looking at? Stop staring at me,'" Messing said. "It was like a guy with a cloud over him, like rain falling on one person. He was an OK guy, but his illness took over. He was not driving the car anymore. He was in the backseat,and the driver was headed for a wall. It was just a matter of time."

On the evening of March 21, a member of the Street Outreach Team and a Burlington police officer were en route to Grenon's apartment — del Pozo declined to specify if they planned to arrest Grenon or simply talk — when a neighbor called 911 to report that Grenon was again threatening violence.

The 911 call prompted police to take the lead, while the Street Outreach Team member stayed at a police command post, away from Grenon's apartment.

Vermont State Police and del Pozo have offered the following account of what happened: When police arrived, they encountered Grenon, yelling and armed with knives. They fired a stun gun at him, which for some reason didn't have the desired effect. He backed into his apartment, shut the door and didn't respond for hours as police tried to talk to him. They drilled a hole in his wall to try to check on him with a camera, but he stayed out of its view.

Concerned Grenon might hurt himself, del Pozo sent officers with tactical shields into the apartment. They found him hiding in his shower with two knives. They fired pepper balls into the room, but the chemical irritant didn't move him. They again tried the stun gun, but Grenon walked, with his weapons, toward the officers. One of them, 23-year-old David Bowers, opened fire with his service pistol.

The Vermont Office of the Chief Medical Examiner ruled that Grenon died of multiple gunshots — the death certificate did not specify how many — to his torso and extremities.

Grenon's daughter, Niki Grenon Carpenter of Arizona, released a statement to WCAX-TV in which she said her father was born in Barre, graduated from the University of Vermont and Saint Michael's College, and served in the U.S. Air Force. He loved to read and travel, she said. But as he aged, medication failed to keep his schizophrenia in check. He recently stopped taking his pills, she said.

"My father was not the sum total of his mental illness or tragic death," Carpenter said, according to WCAX. "He was a wonderful man that both endured and overcame many things in his life. He wasn't by nature a violent man, even when broken from reality, and this is the first incidence of violence to my knowledge."

Bowers, a Colchester resident hired by the Burlington Police Department in July 2014, is on paid administrative leave.

The Vermont State Police are conducting an investigation of the shooting, which Chittenden County State's Attorney T.J. Donovan will review.

But if history is any guide, nothing will happen to Bowers. The law allows police to use deadly force if they believe they or their fellow officers are in danger of serious injury or death. Vermont police officers have been cleared of wrongdoing for killing people who brandished shovels and other implements.

The term used in legal circles to describe such police killings is "lawful but awful."

"It is repetitive. It's infuriating to me," said former Vermont defender general Robert Appel, now a private attorney. "Why did they have to precipitate confrontation? What about just waiting? What's the rush? The cops have this warrior mentality. It's like video games gone live."

Del Pozo explained that mental health crises are usually at their most acute when someone calls the police. They don't have the luxury of backing away.

"We have a respect for human life," del Pozo said. "But this respect has two dimensions. It's the respect of the people we serve ... and it's also a respect for the life of police officers who serve this community. That's the balance we strike."

That balance is bound to be tested again soon, somewhere.

Dettman said he has other mentally ill tenants living in public housing buildings who sometimes lash out, just as Grenon did. He said: "The system doesn't know what to do, so it cycles them — arrest, release, wait until another incident."

Just five days after Dettman said that, Burlington police were again called to South Square, for a report of a suicidal resident who was possibly armed. Unlike Grenon, the woman, whose name was not released, had not threatened anyone. But officers and crisis negotiators were still wary as they gathered outside her apartment. After they looked through a window and saw her lying facedown on the floor, the cops decided to go in. The woman survived a suspected overdose. This time, del Pozo said, the officers' decision to charge into an apartment may have saved a life.