Poetry Review: Sydney Lea's 'Here' Is Rooted in a Sense of Place 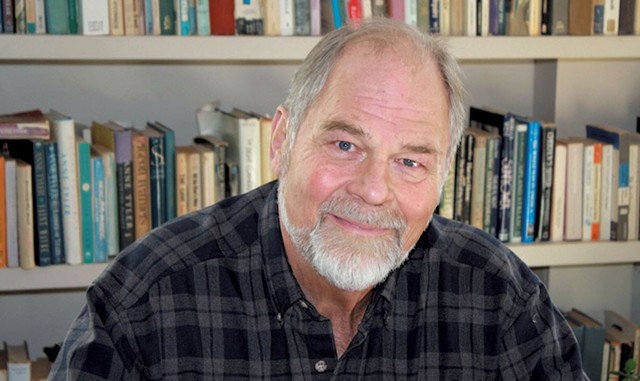 The first poem in Sydney Lea's latest collection, Here, begins with an image of a dying season: "That birds have largely quieted may distress us, / and like neglected mail, the garden's lettuce / went yellow weeks back, then simply dissolved." Two months after Here's release in September, 11,000 climate scientists from around the world approved a report, published in the journal BioScience, stating unequivocally that our collective ecological future is in peril.

"The climate crisis has arrived and is accelerating faster than most scientists expected," the report read. "It is more severe than anticipated, threatening natural ecosystems and the fate of humanity."

In 2019, another year marked by devastating wildfires and floods and disappearing Arctic ice, mourning the loss of birdsong seems like an acknowledgment of an increasingly tenuous situation, a proxy funeral for the death of nature as we once knew it. In an interview earlier this fall with poet Nin Andrews on The Best American Poetry's blog, Lea said that he wasn't necessarily thinking about ecological collapse when he penned those lines. "[T]hough I am as full of anxiety about climate change and fury at its deniers as I can possibly be, I don't think confronting its apocalyptic threats is what I was thinking about," he wrote.

In a 2013 interview with Image Journal, Lea described his reverence for the separateness of the natural world, its immunity to human projections and vanities: "The grand appeal of nature for me is, precisely, that I do not find Coleridgean 'correspondences' between my own capacities and natural ones. In fact I savor much of nature for its very otherness, its resistance to anthropomorphizing urges on our parts."

Lea, 76, who served as Vermont's poet laureate from 2011 to 2015, cofounded the New England Review with Middlebury College professor and author Jay Parini in 1978. Over the past two decades, Lea has published 13 volumes of poetry, including Pursuit of a Wound, a finalist for the 2001 Pulitzer Prize.

Nature has long been a protagonist in Lea's work. Each poem in Here, as the title suggests, is deeply rooted in a sense of place — a time of day, a cast of light, the squabble of vultures overhead. As he takes stock of his surroundings, Lea scrutinizes himself within them, grappling with the joys and sorrows of aging. His tone, for the most part, is robustly optimistic, a celebration of well-being rather than a lamentation of the diminished strength of age.

But in Here, nature also seems to be a mirror for the precariousness of life — particularly for Lea, who suffered a heart attack three years before the book's publication. In "I Keep Going at 20 Below," he reminisces: "I used to plow / on snowshoes through powder, hour on hour. / It shames me to say that the notion scares me now."

But Lea resists the easy solipsism of finding melancholy everywhere, focusing instead on the persistent abundance of life all around him: "Still it's hard to keep with wistfulness when air / keeps glittering so, and creatures no bigger than thumbs / keep at their sustenance, dauntless."

To marvel at nature from the safety of a warm home, with or without wistfulness, is to luxuriate in the privilege of a mostly intact world. Meanwhile, to be alive and reading the news today is to be disabused of the notion that we ever existed apart from nature — and to realize that that precise line of thinking, in its corporate, industrialized form, has led us toward irrevocable disaster.

Of course, Lea's view of nature as "other" doesn't dovetail with, say, the fossil fuel industry's brutally capitalist logic, but, at this point, any treatment of nature that doesn't wrestle with its vulnerability feels out of touch. It's hard, for instance, to read a poem like "Who Knows? That Lifelong Question," a three-part meditation on an elderly man's walk through the winter woods, and not sense that the man and the woods are equally fragile:

He tries not to prophesy
What constitutes his future,
Urging himself instead
To consider what little he can know,

Or at least can see. For instance,
These tiny, wriggling specks
In the granular stuff under trees:
Snow fleas, harbingers

Of the sugar maker's season.
Perhaps he'll stay with that,
Will end with sweet figuration
As home rises into sight.

The constancy of the physical world, the reliability of the harbingers of "the sugar maker's season" — a season whose existence is threatened by rising temperatures — can no longer serve as stable sources of meaning. In this context, Here feels a bit like an elegy, a fraught depiction of what nature might not mean for future generations. We still need nature poetry, maybe now more than ever, but we can no longer read it as we once did. Lea seems to be writing it as if we could.

The original print version of this article was headlined "Quick Lit: Harbingers of Change"