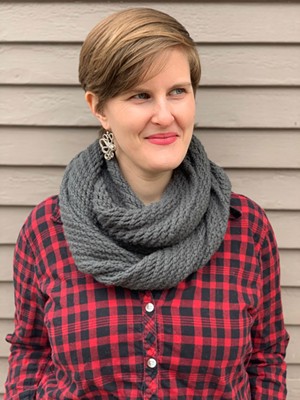 Lizzy Fox's debut collection of poems, Red List Blue, opens by describing a woodstove that "curls its arms / around whatever creature sleeps / in the ashes." The stove becomes a rich metaphor: at once a source of warmth and a potential danger, a steady appetite that demands to be fed and a place where everything turns to ash. "I wonder if you ever fear a chimney fire / when we leave the house alone / and burning," she writes, hinting at the restless disquiet that the book continues to explore.

One source of that disquiet soon becomes clear in the title of the third poem, "On Watching a Video of Sea Creatures Swimming through Trash." On its face, the poem laments the senseless waste of plastic and packaging that ends up in the ocean despite our best intentions to recycle. But more meaning lurks under the surface: a darker implication that it's too late to do anything about it.

In the final stanza, the poem shifts from the sea back to landlocked Vermont, where "A tree in my backyard grows around a tire, giving / the illusion the earth will heal over our nonsense— / oceans so wide—just look at the tide come in."

In the devastating "Updating the Red List," Fox describes "a menagerie of unpronounceable Latin / pixelated faces, tree limbs, ferns," which she tries to count, but "at the bottom of each page a button says, 'Show More.'" The title refers to the Red List of Threatened Species, an inventory of creatures in danger of extinction, published since 1964 by the International Union for Conservation of Nature.

Many of Fox's titles mention anxiety, depression and insomnia. In an interview published by the Vermont College of Fine Arts, where she earned an MFA in writing and publishing, the Montpelier resident describes the collection as "a set of poems detailing the ways anxiety shows up in my behavior and how it feels as a physical sensation." This gives the poems a personal aspect that's both vivid and highly relatable, especially during a global pandemic.

A link between the speaker's anxiety and eco-dread is never explicitly stated, but the poems unfold while weaving the two together. tweet this

In "On Depression (a sticking point)," Fox writes: "On the back of a tongue where a pill / will stick if it's not washed down, / where if it sits long it starts to burn." The poem ends with a savagely good line break: "Uncoated Tylenol. I chew / dark greens topped with walnuts I crush myself / under a heavy knife."

A link between the speaker's anxiety and eco-dread is never explicitly stated, but the poems unfold while weaving the two together. Fox accomplishes this particularly well in "Collapse," in which the speaker goes diving on vacation and wonders where all the fish have gone. The title itself could refer to either the death of a coral reef or an emotional collapse.

"All that trash in the headwaters," she writes. "And the two of us filling our tub / in our hotel room, turning on the jets. There was a jacuzzi just outside. / There was a whole ocean."

Throughout Red List Blue, dread is imbued with a strong sense of intimacy. Even as trash blows through the book and the poems are littered with Frito bags, the speaker is rarely alone and finds solace in lovers and relationships. The blue of the book's title is enumerated in a long, moving poem that begins by listing different shades, and then shifts into a synesthetic meditation on desire and art. In brisk couplets, the speaker's association with different colors leads the reader through her memories of dates with a drunken painter and "a man named Amethyst," who presents her with an origami lily the same color as her "grandfather's weeping / eyes when the cataracts set in."

"Monarch Meadow" is another standout poem written in couplets. "I did not know the new farm would pick apart the bales and till the milkweed under. // That monarchs would starve mid-migration. / That they were half-ghosts already, fluttering before my eyes."

The poems near the end of the book reach outside Fox's central themes and show more of her range. In "Broken Thorn Sweet Blackberry: A Boy's Memory in Response to Brigit Pegeen Kelly's 'Song,'" for example, Fox converses with a macabre, folkloric tale about a group of boys who sever a goat's head as a prank, only to be haunted by its song for the rest of their lives.

Fox gives voice to one of the boys, while shifting into Kelly's halting style: "I can't tell you anything you don't / already know. An animal was in the yard. / It wouldn't stop bleating. / I wanted to hold the quiet sky in my arms."

Even while embodying this very different character, the poet's voice hints at the consolation that Red List Blue offers in the face of dread and malaise: the power of human connection to get us through hardship. "I wanted to hold the quiet sky in my arms" chimes with a line from the book's opening poem: "I wish to be still / under blankets, wrapping my arms / around your chest, even when the dream / I slumber with is poor." Red List Blue is a strong debut, wrestling with the inner self while remaining unafraid to look honestly at the world around us.

I pluck the last truffle from a heart-shaped box. Caramel sticks to my teeth—

sends a sugary shock. I've never married. In the shower, I twist my back

to see skin crease at the love handle. I let water run hot down the side of my neck

and see the puckers on my buttocks like pockmarked marble. I dance when I walk.

I hold each pose as if I were a model. I'm the anticipation of small births—the burst

find myself beneath the hummingbird mural. Its ruby throat beckons me

to climb up and drink. I'm afraid of heights. Living on the ground, I see small things:

the child who licks cherry goo from her fingers, the discarded candy wrapper

stuck in a wad of snow sure to melt, puddles growing like so many small prayers.