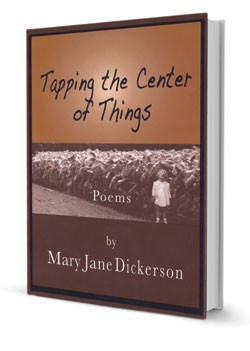 “A Sonnet is a moment’s monument,” wrote Dante Gabriel Rossetti. Nowadays, we’re more likely to monumentalize the fleeting moments of our lives via Facebook and YouTube. But poets continue to preserve their memories in the amber of verse (not just sonnets, of course). One of the most interesting aspects of reading local poetry is discovering the mad architectural diversity of those personal “monuments.”

Last weekend I read three locally published poetry collections in which the authors wrote, variously, about picking up a CSA, picking tobacco in segregated North Carolina and picking one’s way through the ravaged warscape of Iraq. Let’s take them one at a time.

“In the unwritten letters and poems are the true faces of war,” writes Jon Turner in his second collection, Reasons to Find a Stream. The former Marine and Iraq veteran cofounded the Combat Paper Project; now Turner works with the related Peace Paper Project. His bio on the organization’s website says his “focus is now upon his family, growing food, holding ceremony, creating peace and acknowledging sacred space.”

The poems in Reasons reflect that shift from reliving the horrors of combat to building a life in the aftermath through the rediscovery of traditional rituals. The book’s first half recalls Turner’s first self-published collection, Eat the Apple, with its jagged imagery of war, sometimes experienced through the lens of post-traumatic stress disorder. “[E]ach fear became a metronome,” writes Turner of a soldier on alert, “// and his gun was the instrument / remembering only one song.” In “Chastity,” he writes powerfully of wanting to expel memories as well as shrapnel:

I am hoping that one day?

a large pimple will rise from

my cheek and with one quick

?the memories are gone

In the second half of Reasons, Turner turns his attention to songs of calming, love and healing, many evoking nature and Lakota traditions. A poem about tree identification, for instance, becomes quasi-mystical: “The year round ash has / diamonds / undug from its callused skin / that interweave / through vast chambers / of unknown life,” Turner writes.

War’s “true faces” may hide in poems yet unwritten — one of Turner’s poems describes an Iraqi child begging for a pencil, as if to write his own story. But this author has given us access to harrowing moments from that chapter of his experience, along with moments of surprising grace.

Grace is a recurring theme in Sherry Olson’s Four-Way Stop. In fact, the Plainfield educator’s verse sometimes poses the question: Is it possible for poetry to be too happy?

That’s not to say there’s no darkness in the collection, which touches on war, global catastrophe and the travails of the inmates to whom Olson teaches poetry writing at a correctional center. Most of these poems, however, are more like the title lyric. For many urban dwellers, four-way stop signs spell aggravation. Yet it’s hard not to feel a little ashamed of one’s irascible reactions to drivers who dawdle or jump the gun as one reads Olson’s radically optimistic take on taking turns at the signal:

or family or love

comes over me every time.

Why does it always work,

so that today here

at this hectic intersection,

we are so polite to each other

Not for nothing is Olson attentive to the mute power of traffic signals: Her dad, she reveals in another poem, did the research that helped put white lines along our highways.

The poet describes following those white lines as an everyday pleasure, one of many the collection showcases. Among the moments Olson monumentalizes are trips to Paris and Greece, restaurant meals, dog walks, listening to “Greg Izor And His Band At The Black Door,” making toast, taking out compost and gathering “delicious and beautiful” CSA vegetables. “It couldn’t be any better,” opens one poem about Saturday morning at a dog-friendly bookstore.

In short, some of these poems could double as advertisements for the crunchy Vermont lifestyle. Yet they have an eloquent simplicity, and Olson’s pleasure in her subjects feels both genuine and contagious. By the end of the book, readers may find themselves resembling the airplane seatmate in “Flying,” whom the poet asked to “clap with me / if the landing was good.” We clap along with Olson in thanks for blessings we normally take for granted.

Autobiographical poems sometimes get a bad rap, but they need not be navel-gazing; often, the poet “monumentalizes” his or her own youth to capture and preserve the shades of a way of life gone by. In this way, Mary Jane Dickerson brings her North Carolina childhood alive in Tapping the Center of Things, a collection that spans decades. The book’s first half is a series of deftly described recollections: The reader experiences tobacco harvesting; chitlins; a segregated tent show; a “Polio Summer” that is “shadowed by the rising fear of paralysis” yet rich in eerie beauty (“magnolia leaves wove their patterns / in black and white over moon-splashed walls”).

A Jericho resident and retired University of Vermont English professor, Dickerson may seem to have left the South behind. But ties to the past aren’t so easily broken, as she reveals in “My Inheritance,” a powerful lyric that appeared in Harper’s in 1980:

… still I am pulled southward always

and falling through fingers, my grandfather’s

and yours, my father, until I too reach out

through years and miles and cup my hands

to receive the soil…

In the collection’s second half, Dickerson explores the Vermont landscape, and with the evocations of sledding hills and crisp autumns come creeping reminders of entropy and mortality. A tribute to the “Red Sox Nation” doubles as an elegy for a beloved Sox fan. In the delicately devastating “Nantucket Elegy,” the shifting coastline below a beach house becomes an emblem of time’s destructive power. Yet the poem stands, just as Rossetti suggested poetry should, as an indelible reminder “of what this seaside place has meant to us, / its presence and ours alive always in every passage / we make through memory’s house.”