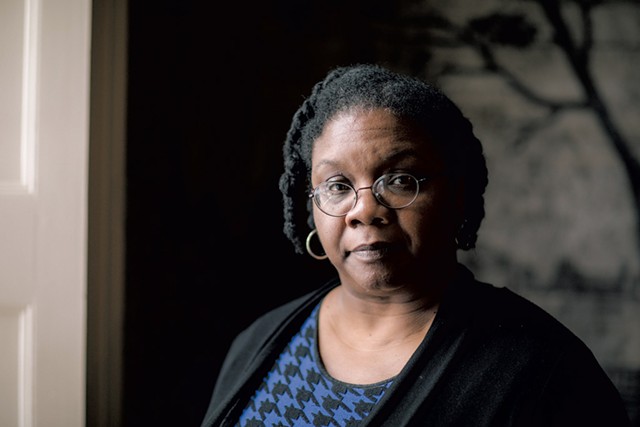 Some books seem enormous because they have many pages. A book of poems may be slim in size and yet immense in other ways, for instance, in formal variation, thematic range and emotional power. Vievee Francis' Forest Primeval: Poems is a book with mythic and historic scope, and its sonic landscape is often symphonic.

This third collection of poetry by Francis has recently been honored with two of contemporary literature's highest honors. In October 2016, Forest Primeval was given the Hurston/Wright Legacy Award for poetry (named for African American luminaries Zora Neale Hurston and Richard Wright). That prize "honors the best in Black literature in the United States and around the globe," according to the Hurston/Wright Foundation website. And in January, Forest Primeval earned one of the nation's most generous single-book accolades, the Kingsley Tufts Poetry Award; its $100,000 purse will be presented on April 20 in a ceremony at the Los Angeles Public Library.

Francis, who grew up in Detroit, took a new position last fall as associate professor of English at Dartmouth College after several years living and teaching near Asheville, N.C. While some of her new book's poems take place in "incinerated / cities" like that of the poet's childhood, many pieces in Forest Primeval are situated in the countryside of southern Appalachia. For readers in the northerly reaches of that mountain range, these poems' evocations of fauna and flora and weather readily call to mind the kindred woodlands of New England. A reader who lives in Vermont can easily picture this summer abundance from the poem "Happy?"

in a heat seemingly ceaseless
as the red-throated woodpeckers,

loll from, indolent and berry-full.

Since poems are made of sounds, listen to the writing here: blooms and blooming, heat/seem/cease/tree, then red/peck/less, mating and same, and the subtle, perceptible progression of falls to loll to in-dole-nt to full. The print and digital editions of Forest Primeval are complemented by an audio version, in which the poet herself reads the book in its entirety. Her skill in recitation manifests in gorgeous acoustics.

Also evident, both on the page and in the recording, are Francis' remarkable ways of joining differing modes of poetic expression. She bounds from the spiked eloquence of blues lyrics to sonorities that recall concise Dickinson and profuse Whitman, sensual Keats and oracular Shelley, somber Donne and bountiful Shakespeare, and the King James Bible. In this selection from "Altruism," the phrasing and diction are imbued with our literary ancestry:

Give me the fruit I may leave my mark upon
or flesh (willing enough) but something, something
besides lip and the language of loss. Give me the pleasure
of knowing the giving matters to more than the receiver,
and given such knowledge give me faith, or denial, or
truth enough to manage this
truth such as it is.

Many poets have reprised the fairy tales of Andersen, Perrault and the Grimms, and Francis finds new nooks and crannies in those not-yet-worn-out stories. In numerous poems she combines contradictory (mortified and delighted) views of wolf-like personages — mammal wolf or wolf spider, blues singer Howlin' Wolf, Little Red Riding Hood's cunning menace and the mesmerizing monster of Beauty and the Beast (more Cocteau than Disney, in her reckoning). Here's the opening of "Bluster":

I knew the path and what was on it.
I wore his favorite color. He said,
"I could just eat you up." As if I were a girl
whose cheeks he could pinch into a blush,
pluck a bit off and pop onto his tongue.
I held a rustic basket of his favorite cheeses ...

The tonal range of Forest Primeval is tremendous. Some poems are sassy and satirical; some are filled with tautly rendered sensory details. Then a reader arrives at the almost overwhelming "Skinned," which quietly encompasses the nation's racist saga while tracing a granddaughter's relationship with her grandmother (and her grandma's lotions).

What qualities in a book of poems could be called symphonic? In books, as in musical compositions, a sense of cohesion and unity can be achieved in different ways.

Some books accrue impact through repetition and consistency; in Ocean Vuong's rightfully praised 2016 book Night Sky With Exit Wounds, for example, an intense and extended similarity of texture and pace creates an overall effect. Passages seem to both advance and recur. By contrast, Forest Primeval proffers bold and exuberant variety, with successive pages leaping in unexpected directions, juxtapositions that might be jarring but aren't.

Over repeated readings, the care with which Francis shaped her book becomes ever more evident. Each poem gives way to the next — long-lined or compressed, intimate or theatrical, whisper-quiet or outlandish — in a sequence of six parts that function like movements.

The audio version of the book reinforces what an attentive reader will experience on the page: For all its boldness in shifting registers and mixed textures, the poems have a strong, persisting "voice," multi-vocal yet continual, whether the speaker is Circe, Little Red Riding Hood or someone who probably strongly resembles the poet herself. Again and again, Francis renders the elation of speech, as in the opening of "Epicurean":

A hungry mouth, an empty mouth, insistent mouth,
mouth that would be filled by the seaweed of me,
that would crack the shell with a rock and take its portion.
The mouth gauges its slide, gapes—
grotto mouth. Mouth where I might go to pray,
to fall upon my knees before. A mouth of "Yes."

Forest Primeval is unusually learned, yet its erudition is sly and never haughty. Francis is a poet who has learned as much from Lead Belly as from Homer's Odyssey.