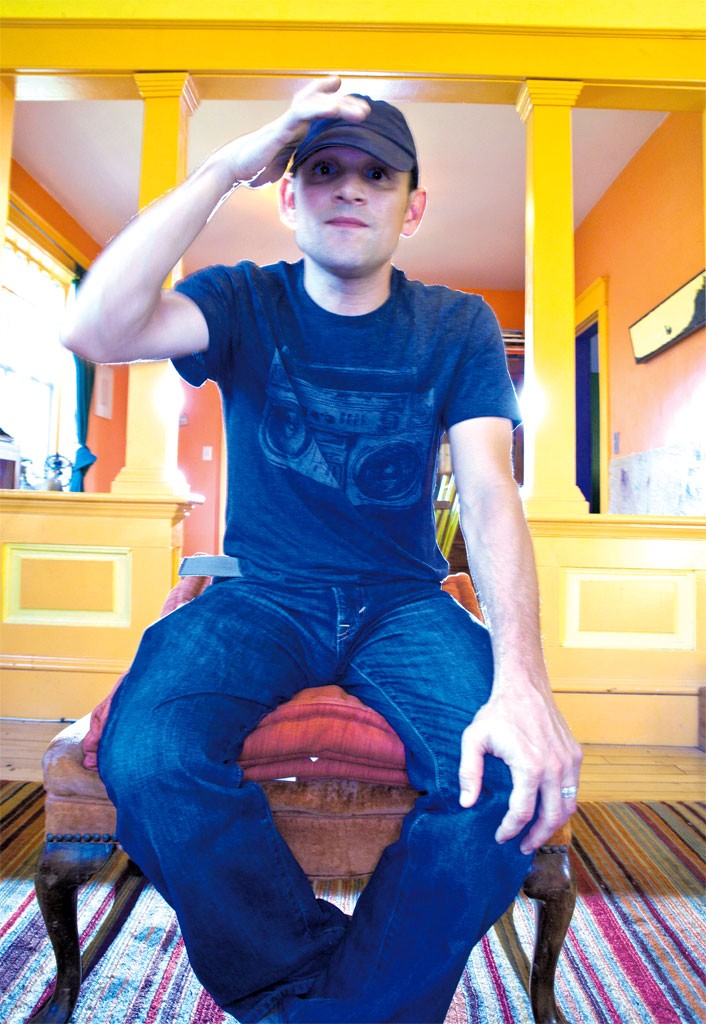 The local hip-hop scene has increasingly become a platform for a diverse collection of voices, often closely tied to kindred communities such as skateboarders, dancers and street artists. Hip-hop has always been as much about culture as rap music. So it's appropriate, albeit surprising, that the latest landmark work in local hip-hop would come from an unlikely source with an even more unlikely angle: Burlington poet Stephen Cramer and his newly published book From the Hip: A Concise History of Hip Hop (in sonnets).

Through a series of cleverly crafted sonnets, Cramer's new book chronicles the story of hip-hop — and at times his own life — from Kool Herc to the final days of the Beastie Boys. It is an ambitious, loving tribute. It's also a great read.

Cramer, who lives in Burlington with his wife and daughter, is a humble artist and family man with a contagious smile. He is also a busy professor and successful author. He teaches literature and poetry courses full time at the University of Vermont and is seeing his work published with increasing frequency. He also loves hip-hop. From the Hip is, first and foremost, the work of a fan who grew up on LL Cool J, Public Enemy and KRS-One.

"My introduction was Run DMC, on tape," says Cramer, 39. "I listen to a lot more jazz now. But growing up, hip-hop was the soundtrack for so much."

Cramer is a native of upstate New York, hailing from, as he puts it, "the classic town with more cows than people and one stoplight."

He moved to New York City for college and immediately fell in love with the rhythms, imagery and grit he found there. He stayed for 10 years, during which time he met his future wife. He was inspired by his day job amid the global swirl of influences at the Museum of Modern Art. He fell in love with jazz, which he says he prefers to experience live. That's a preference he relates to poetry, as well.

Cramer's love of poetry was strongly influenced by the Massachusetts native Stanley Kunitz, who once remarked, "It is important to test your poems against the ear. The page is a cold bed." Accordingly, Cramer will read selections from his book this Thursday, September 18, at a reception at Karma Birdhouse in Burlington. He also promises a handcrafted "old-school hip-hop mix" for the occasion.

In contrast to how carefully calculated the sonnets are on the page, Cramer states that his writing process is a blur of physical activity.

"I can sit down for about half an hour," he says with a laugh. "But then I need to get up, do dishes, clean something, chop some vegetables."

Cramer's polymorphic creativity often draws from the same tradition as the modern remix culture. The genesis of From the Hip was a 2012 series titled "What Rough Beasties," in which he cleverly interpolated seven W.B. Yeats poems with Beastie Boys songs, both infamous and obscure. Cramer had previously written poetry inspired by jazz, but never rap. After those experiments, From the Hip grew into a lean, effortlessly devastating book.

Discussing his work, Cramer repeatedly emphasizes the importance of image to hip-hop music. He explains this particular experimental bent in the introduction to From the Hip: "Every age is given its own unique set of images to work with."

"I feel like hip-hop was the first post-video genre, and it grew up with MTV," Cramer reflects. Fittingly, each of his sonnets is rooted in music videos, television references and first-person detail. This is a testament to hip-hop as best experienced with both ears and eyes — appropriately, the word "eyeball" is yet another innovation given to us by sonnet master William Shakespeare.

Cramer is an excellent teacher of history, too. He mines the past for important questions and deftly avoids easy answers. His treatment of NWA's "Fuck tha Police" finds an unexpected resonance with recent events in Ferguson, Mo. This is in cutting contrast to Jay-Z's "99 Problems," framed as the theme song for a 2008 election-night party for Obama's campaign staff. At every turn, Cramer's touch is cinematic. His oblique and respectful treatment of intertwined sonnets on Tupac and the Notorious B.I.G. is especially impressive. There is jazz, too, in his meter, which reflects how animated Cramer can be in conversation.

But the emotional pulse of Cramer's collection is in the autobiographical details he evokes. Ice-T's "Rhyme Pays" is a playful parable about the appeal of parental-advisory stickers to smart, rebellious kids. The Rob Base single "It Takes Two" is the soundtrack to a doomed wedding.

The three decades of hip-hop history covered in From the Hip are infused with more than a mere love for music. Cramer's verses are wrought with a sad, wise reverence for life itself.

A release party for From the Hip will take place on Thursday, September 18, 7 p.m., at Karma Birdhouse in Burlington. Free.

who need to be told which of the black pawns

on stage is which. I mean, just take a look

at the video: it's all sanitized

& cartoon-like, the streets scrubbed down to

a sheen. This is the world on Lysol.

& the guy's not rapping about swiping a few

bucks or his dad's last smokes. He's talking about

stealing his parents' Porsche for Chrissakes. Look: his rhymes

are good, & the guy's funny, no doubt

jealous of his mass, suburban appeal.

I just wish my parents had a Porsche to steal.


The original print version of this article was headlined "Ill Communication"