Didi Jackson's book of poetry, Moon Jar, was released on April 21 — the day before her 50th birthday and during a global pandemic. The book contains several years' worth of poems about Jackson's late husband, who died by suicide in 2011. Though many of the poems had been published previously, Jackson said it was emotionally intense to see them emerge into the world in book form.

"The whole day, I just cried," Jackson said. "I cried for what we were going through in the country, all these deaths. Also one of the things I was really afraid of was, I didn't want to add to the pain and suffering of the world. I didn't want my book to add to that."

Jackson's book lays bare, in precise and honest language, the anguish of unexpectedly losing her husband, her slow journey through grief, and the eventual blooming of her relationship with and marriage to fellow poet Major Jackson.

Moon Jar's opening finds the poet unable to eat or sleep, all but destroyed by her loss; the book closes with Jackson at peace with "that keyhole size of grief that remains crystalline," as she writes in the book's title poem.

"I wanted the book to have that turn to hope," Jackson said. "Life continues. And I've noticed that, even in the pandemic ... we all have to get up, get dressed and get on with it, you know?"

Jackson grew up in Florida, where she lived for 40 years before moving to Vermont in 2016. The Rochester resident is a lecturer in the University of Vermont's Department of English and just finished teaching a course on African American poetry. Pandemic restrictions kept her from seeing her son, Dylan, graduate from college in Florida, and she can't gather with friends to process the recent turmoil and protests over police killings. But she's still writing her way through difficult times, and shared with Seven Days how she does it.

SEVEN DAYS: Do you feel any urgency or pressure to capture this particular moment? Or are you allowing yourself to write about whatever comes up?

DIDI JACKSON: I don't put that on myself. Poems can be political in so many different ways. There are political "now" poems, and then what I call "slow burn" poems. It's dealing with and capturing that moment, but kind of quietly or slowly.

One of the poems I wrote about the pandemic, funny enough, is about the spider that was on my desk and how alone the spider is, and it's an environment that seems, I'm sure, completely unfamiliar to her. So that becomes an isolated, social-distance poem in its own self; it's not that overt firecracker of a poem.

There have been moments in my life that I've been so angry about and so infuriated, and Major gave me such great advice once. I was just railing — I think it was on something about the environment — and I was like, "What can we do? It's hopeless." I was spiraling. What he said to me was, "Write about it. Put it in your poems."

I can't write an immediate poem. Even in dealing with my husband's suicide, it took a very dear friend of mine, Michele Randall. She's a poet who lives in Florida. She would come over, and we started writing. At first it wasn't even writing. She would bring scissors and magazines, and it was like cutting therapy, almost like going back to preschool. That evolved into her bringing little pieces of art, and we'd write about that. Then, eventually, that led to me being able to write about what happened. But it took time when things were so traumatic.

SD: All of these poems are intensely personal. I'm curious about the emotions surrounding putting them out into the world. When you were writing these poems, did you think you'd ever want to share and publish them? 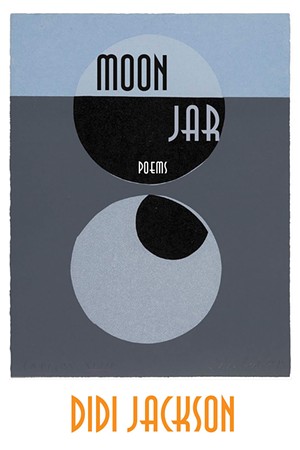 DJ: You write the poems, and you're in your room by yourself, and you might share them with a friend or two, and then they might get published in a journal. And you're like, "OK, take a deep breath," and you move through it. But I was really concerned about my son. There's not a lot that mentions him, but there's a couple poems of him in there, and I was feeling very protective of him.

SD: Small details in the book really strike an emotional chord. I'm thinking of the line about grooves in your son's piano reminding you of your late husband's "practice cuts." Was it hard to include those details? Has your son, who lost his stepfather, read it? Do you want him to read it?

DJ: I don't know. He has the book. He knows about the poems that he's in. That one you mentioned was the hardest poem for me to put in the book. When Gary died, Dylan was 13. He didn't know the details. It was advised for me by the therapist to not reveal them. He doesn't need to know the details. But it's so interesting that the book, I felt, needed some of that.

I can remember being, early on, as a widow, and when someone found out that my husband had killed himself, the first question they would ask was, "How did he do it?" Like, that is none of your business! I was so shocked by that. But then I worked through that, and I think it's human nature.

We have this idea of self-preservation, like if we know how that person did it, it guarantees us our own personal safety, in a way. Which is all fabricated, of course. But it's this way in which we kind of navigate the absurdity of suicide, and the reality of it. So I felt like I was OK with, maybe, placing small details about how he took his life.

I think the book is there more for the survivors, those who survived suicide loss. There have been a handful of people who've told me personally that they have attempted suicide or contemplated suicide, and that they really appreciate the book for the honesty and for showing that there's movement toward something positive and new life, a new chance.

When the book came out and I was doing Zoom readings, I was worried to read poems from it. I was trying to flip through it and find what I called my non-suicide poems, which are very few and far between. But now I don't worry about that quite so much.

The original print version of this article was headlined "Reflections on Loss | Poet Didi Jackson on grief, recovery and her new book, Moon Jar"