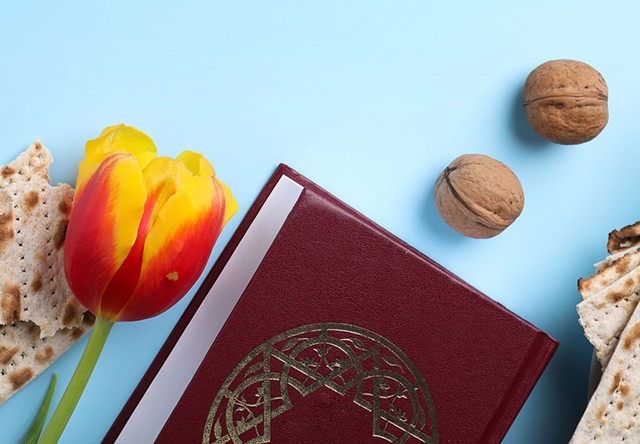 First I saw my face appear on the computer screen

puffier than I imagined.

Then my daughter holding her six

It was his first Seder.

Others popped up, almost from nowhere,

at a dining room table with their blurred parents, behind them,

another pair of husband wife perched side by side on a sofa,

before they were snuffed out by Zoom.

It was a miracle.

The thread of tradition, frayed in places,

was rewoven by long, stretched wires.

The Egyptians would have been dumbstruck:

The Jews have survived.

Arthur, who used to be my husband,

took his role as Leader seriously

I asked, where did he find that sound

at the age of ninety-four?

I heard a jumble of voices

speaking at once because

we could not see who should go

next in the prescribed order of things.

We canceled each other out.

According to an invisible signal,

we fell silent and waited for the next voice to jump out.

To bless the matzo, the parsley dipped in salt water, the bitter and the sweet.

There was no meal we could share together, no

Each family retreated to its own dining room,

sensing the void and wanting to remain together.

We skipped to the last pages of the Haggadah

and turned to the songs, sung since childhood.

Our voices were liberated and loud:

"ONE KID, ONE KID WHICH MY FATHER BOUGHT FOR TWO ZUZEEM," from

The story of Passover had been recited once again.

We had kept the pandemic hidden, if only for one night.


— Madeleine Kunin was the Democratic governor of Vermont from 1985 to 1991 and the U.S. ambassador to Switzerland from 1996 to 1999. Her most recent book is Coming of Age: My Journey to the Eighties. She has been writing coronavirus poems for several weeks.