Podcaster Erica Heilman Wins Peabody for 'Finn and the Bell' 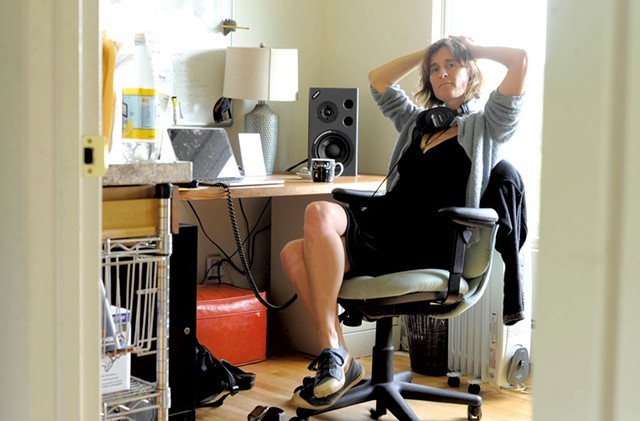 "Rumble Strip Vermont" creator Erica Heilman has won a prestigious Peabody Award for her audio story about a Hardwick teenager who died by suicide.

Heilman, an independent podcaster who started "Rumble Strip" out of a closet in her East Calais home, joined The New York Times comedian Bo Burnham, National Public Radio host Terry Gross and others this week as one of 30 winners of the annual award for compelling storytelling in television, audio and digital media.

Heilman told Seven Days on Friday that she was heartened the Peabody committee decided to recognize the work of an independent producer like herself, whose do-it-yourself approach reflects the roots of the podcast genre.

"I really thought it was impossible that I might win one of these awards, just because I don't have a budget," she said.

Heilman's piece, "Finn and the Bell," was a staggering, intimate portrait of 17-year-old Finn Rooney, who died in 2020, and of his friends, family and community.

The Peabody committee described the piece, which was produced in Heilman's distinctive "drifting, non-narrated format," as gently guiding the listener "through the overwhelming pang of loss toward celebration of a life."

"Sometimes a great piece of local journalism is about reflecting a community back on itself, both in times of joy and in times of tragedy," he said. "So for its tender treatment of a community in grief, 'Finn and the Bell' wins a Peabody."

In a recorded acceptance speech, Heilman said the story shows "how extraordinary our tiny, ordinary lives really are, and also that our capacity for love is second nature to us."

"Love is a kind of natural resting state," she said. "We forget about this most of the time. Most of the time we're just going along, and then something really big happens — somebody is born, or in this case, somebody tragically dies — and then it's right there, just this natural state."

Heilman has produced more than 200 episodes of "Rumble Strip Vermont" since launching it in 2013. She relies on listener donations and plenty of side work to support her storytelling.

Listeners Who Veer From Tired Stories Hit 'Rumble Strip Vermont'
By Mark Davis
Media
Her Peabody doesn't come with a cash prize, but Heilman joked that she may affix the award plaque to the front of her Subaru as a sort of grille badge. She spent the evening following the award announcement playing a few vigorous ping-pong matches with her son, who is close in age to Rooney.

In a recent interview about "Finn and the Bell" with HowSound podcast, Heilman explained how she learned of Rooney's story. She was reporting on a soup kitchen at a grange hall when Rooney's mother, Tara Reese, approached her in the parking lot.

"She said, 'I think there's a story,'" Heilman recounted in the podcast. "'My son killed himself, and there's something about this town, and the way that this town reacted...'"

Heilman interviewed Reese, but concluded that her emotions around her son's death were still too raw to use in the podcast. Heilman and Reese decided to wait many months before proceeding.

Reese discussed the resulting episode in a Vermont Public Radio interview last December. She and her son listened to "Rumble Strip" together while he was alive, Reese said. Sharing her son's story with Heilman offered a way for others to know him.

"I feel like I'm continuing his spirit," Reese said.

As "Rumble Strip" enters its 10th year, Heilman said producing the show has become sort of like writing a diary in which she doesn't explicitly appear. Her subjects, most of them regular people, "help me get through my day," she said.

"And so making this show helps me know what the hell I'm doing, and know how to live better."

Reporting on Finn Rooney and those around him left a particularly lasting impression on Heilman.

"It was so hard to find my way through this story," she said. "To do it justice was terrifying to me — and so hard — that I felt, by the end, that I was somewhere new. And I haven't really figured out where that is yet."