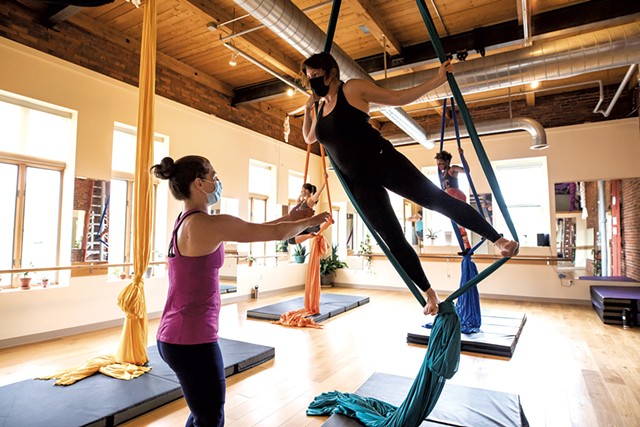 When I was in my twenties, exercise typically meant going out for a run. But as I, ahem, matured, pounding the pavement took its toll on my body. Plus, it got boring.

So, in my thirties, I began to explore new options. Name an exercise trend, and I've probably tried it. Sweating it out in Bikram yoga? Yep. Tucking and shaking in barre class? Mm-hmm. Burpeeing, lunging and energetically high-fiving in Les Mills' BODYATTACK? Been there, done that.

But when COVID-19 hit Vermont in March of last year, I had to press pause on my multifaceted workout routine. Gyms and exercise studios closed, and just the thought of swapping hand sweat with others made me shudder.

Like so many others seeking an outlet for their pandemic panic, I took matters into my own hands. Our basement became a de facto gym, complete with a yoga mat and blocks, free weights, exercise bands and, yes, a Peloton — with which I surprised my husband as a birthday gift before the wait list became a gazillion months long.

Having that outlet over the past year-plus has been important, both physically and mentally. I didn't even have to change out of my pajama pants. But now that we're entering the post-vaccination era, I realize I've missed some of the benefits of in-person exercise classes — the collective energy, the thrill of trying something new, the whole leaving-the-house thing.

It was in that spirit that I approached the introduction to aerial dance class at Murmurations Aerial, a new Burlington studio run by dancer Nicole Dagesse. Using swaths of fabric secured to the ceiling as a partner, aerial dancers balance, swing, spin and even hang upside down in different poses. It's equal parts modern dance, fitness class and circus act. And it was one form of movement I'd never tried.

As a student at the University of Massachusetts Amherst, Dagesse was a member of Wire Monkey Dance, a troupe that specialized in gravity-defying performances on a metal scaffolding. That experience ignited her passion for dancing with props. In 2008, while studying for her master's in dance at the University of Colorado Boulder, Dagesse joined the Frequent Flyers aerial dance company.

"It felt so free and effortless, even though it was so much work," she said.

Dagesse has taught classes locally for the past five years and just recently moved to the space on Flynn Avenue in Burlington. In addition to offering aerial pop-ups and class series for teens and adults, she plans to hold youth summer camps.

Dagesse's studio is warm and inviting. Light streams through large windows lined with plants; the wood floor is honey colored, and one wall features industrial-chic exposed brick. But the focal point of the studio is the billowy, jewel-toned fabric that hangs from steel ceiling beams.

Despite its silky appearance, the fabric is actually a polyester-nylon blend, Dagesse told me and two other participants as we readied for class on a muggy Saturday afternoon. Lest we worry that it might not support us, she assured us that the metal hardware to which the fabric is attached is capable of holding more than 2,000 pounds. That and the soft foam mats beneath each person's station put my mind at relative ease.

When Dagesse mentioned that she responded to "Aaaah!" and "Help!" as well as to her name, I had an inkling that the class would feel less like dipping my toe back into group exercise and more like taking a plunge. Little did I know that, in a few minutes, I'd be hanging upside down.

Dagesse showed us how to tie the two hanging strips of fabric into a knot, leaving a "tail" trailing across the floor. Then we secured the fabric around our shoulders like backpack straps as she demonstrated how to hoist ourselves carefully off the ground and invert ourselves. This entailed hooking our feet to the fabric with our knees splayed so we didn't flip over, then letting our arms hang free. 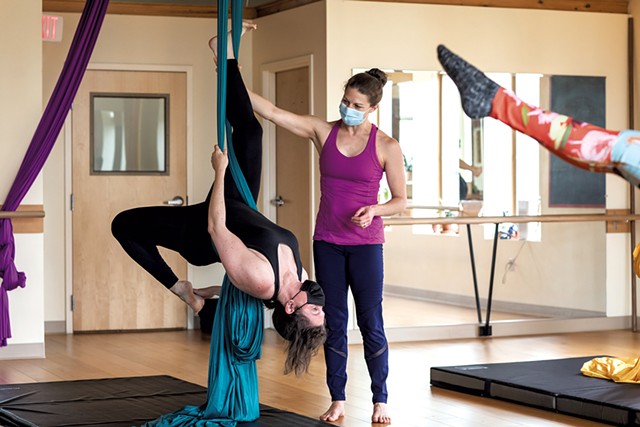 Watching Dagesse demonstrate the move with ease and grace, I doubted I'd be able to mimic it. But somehow I managed to get myself upside down and worked up the courage to let go. Despite feeling a little disorienting, it provided the confidence boost I needed to believe I could do this.

For the next hour, Dagesse led us through a series of poses with names such as "gazelle," "archer" and "waterfall." A few were a struggle, but the instructor's humor and encouragement made it all enjoyable.

"Alison, that looks lovely," Dagesse exclaimed as I stood on a large knot and poked my elbows through pockets of fabric to approximate bat wings. Whether or not the pose really did look lovely, having a real-life person praise me — as opposed to someone beaming feel-good mantras through a screen — felt good.

It was also a surprisingly strenuous workout. My bangs were dripping sweat by the end of class, and one of the loops of my mask broke from the exertion. Luckily, Dagesse had a spare.

My favorite part of the class was a pose called "cocoon" in which I wrapped one piece of fabric around my back and another around my front, creating a 360-degree hammock. Hanging suspended in a sea of teal felt dreamy — maybe even more relaxing than doing fish pose in my basement

My least favorite movement was one that Dagesse told us she'd saved until the end because it might not go well: the spin. We sat on our fabric, wound it up, then let 'er rip. The first time wasn't too bad, but the second provoked the kind of nausea I've only ever experienced on a tire swing.

Two days after class, my arms and back still pleasantly sore, I spoke to Dagesse, who has taught virtual dance and yoga over the past year, about the difference between online and in-person classes.

She sees the benefits of the virtual format, she said, but being in the same room with her students allows her to read their energy and cater to their needs in the moment.

"A screen is inherently flat," Dagesse added. "I feel like we flatten ourselves as we mirror the screen." In her view, learning in person allows us to embrace our "three-dimensionality ... our roundness."

For me, it was a chance to get out of my head for a while — to hang upside down like an opossum, sprout wings like a bat and emerge from a chrysalis like a somewhat awkward butterfly. I embraced my roundness, but also my newfound freedom after being cooped up for way too long.