Local luthier Craig Anderson is ready for his close-up 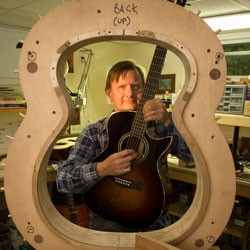 Craig Anderson sold the first acoustic guitar he ever built — what was left of it — for a hundred bucks. It was made of bocote, a gold-colored wood that smells like dill pickles when it’s cut. The sound was “kinda thuddy,” as Anderson remembers it, but the guitar looked good and played in tune. It ended up in a craft show, where the heat from the display lamps reduced the instrument to scrap.

That was some dozen years ago. A cabinetmaker by trade — and a part-time folk musician — Anderson has built about 50 steel-stringed, flattop acoustics, largely on commissions he’s received through word of mouth. The relatively modest output hardly represents the effort and expense he has put into learning how to build guitars from scratch.

“Up until now, I’ve been kind of poking along, trying to find my market,” says Anderson, 55. “One thing I haven’t done is sought out people to build for.”

That will change next month, when he joins more than 125 luthiers from around the world at the Montréal Guitar Show. In its fourth year, the MGS has grown into one of the premier North American showcases for makers of custom acoustic and electric guitars. The three-day event overlaps with the final weekend of this year’s International Jazz Festival, and is expected to attract 20,000 players and collectors.

Anderson, who calls the 2010 MGS his “maiden voyage” from private builder to commercial luthier, plans to bring three six-string acoustics to Montréal. One morning in early June, two of the guitars — the third was having the finish applied — were propped on stands in the den of the New North End ranch house Anderson shares with his wife, Renee. Both guitars are what he calls the A1, an original design that will appeal to anyone who favors small-bodied classics such as the Gibson L-00 or the Martin 000. The A1 features a dreadnought-width lower bout, a narrow waist and a smaller upper bout. One of the instruments, a sunburst beauty with a red spruce top, Indian rosewood sides and a hand-carved walnut neck, is a cutaway model.

Neither the A1 nor its more compact sister, the A2, are especially cutting edge designwise. But Anderson is particular about his raw materials, preferring sustainable woods that have been recycled from old buildings or harvested by people he knows. The ornamental strap on the headstock of the full-bodied A1, for instance, was carved out of an ancient fiddleback maple that once stood in Hyde Park. He’s also got a stash of red spruce, which he uses for tops and linings, from an old Fairbanks Scales structure in St. Johnsbury that was built in 1860.

“A lot of guitar makers buy sets — spruce, Indian rosewood, mahogany,” Anderson says. “They put the wood together into a very beautiful guitar, but it’s just wood from a supplier.

“Each of my guitars is pretty personal in its wood,” he elaborates. “They all have a bit of Vermont history in them.”

Thomas Pearo, guitarist for VTrio and That Toga Band, owns an Anderson model with hand-scalloped braces made from pieces of an old Vermont covered bridge. Pearo was working at Vermont Folk Instruments (now Burlington Guitar & Amp), when Anderson came by, hoping to sell the instrument on consignment. “I fell in love with that guitar, and I am still in love with it,” Pearo says. “It’s truly one of a kind.”

All of Anderson’s guitars have distinct “personalities.” To demonstrate, he picks up the full-bodied A1 — Engelmann spruce top, cocobolo sides, iroko neck — and hums into the sound hole, eliciting a deep, rich harmonic tone that resonates at an F# pitch. Doing the same with the cutaway, Anderson coaxes a sweeter tone that’s higher on the scale, in the A range. “This guitar has a bit more weight around it,” he explains. “It was braced in a different way and has a higher, brilliant sound with lots of overtones.”

In the past, Anderson’s guitars sold for anywhere from $600 to $6000. His current line starts at $5200. That includes a lengthy conference with Anderson to determine the wood, body shape and sound that best suits the buyer’s playing style. “I’ve always liked the idea of building guitars for less money for people,” he says. “But I’ve discovered that it’s not a good way to make a living. If you go into a guitar store and get a Taylor or Martin for that much money, you get it off the factory floor. I can build one that’s very special for the same price.”

A generation ago, the market for American-made acoustic guitars looked dim; sales were down and production of lower-priced instruments had moved to Asia. Some in the industry credit “MTV Unplugged,” which debuted in 1989, with reigniting interest in the acoustic guitar, and encouraging domestic manufacturers such as Gibson and Martin — whose instruments were considered beyond the price range of most entry-level players — to produce more-affordable guitars.

Meanwhile, independent luthiers, building a handful of instruments at a time, laid claim to a larger share of the high-end market. In its February 2010 issue, Acoustic Guitar magazine noted, “There are far more choices in acoustic guitars than ever, both in the instruments themselves and in who makes them. Much of the variety and innovation of the last 20 years has come from independent guitar makers, and the number of solo luthiers continues to expand.”

This “golden age” of lutherie actually has its roots in Vermont — South Strafford, to be precise. That’s where, in 1973, Charles Fox founded the first school for guitar makers, the Earthworks School of Lutherie, which later became the School of the Guitar Research & Design Center.

Fox left Vermont in 1983 and later opened the American School of Lutherie, now in Portland, Ore. He has taught hundreds of aspiring luthiers everything from basic acoustic theory to how to equip and organize a state-of-the-art workshop. He pioneered the switch from free-form design and construction to the more efficient fixed-form method, which incorporates dedicated workstations, and specialized jigs, fixtures and time-saving devices such as the temperature-controlled side-bending machine.

Anderson studied small-shop production with Fox, and he recently returned from an advanced design course taught by the master luthier. Anderson has learned a lot about building guitars over the years, much of it through trial and error. He credits his wife for encouraging him to take his craft to the next level, starting with the decision two years ago to quit his cabinetmaking job. He and Renee have also made a considerable investment to build out Craig’s basement workshop and acquire the tools and equipment needed to produce about a dozen guitars a year.

Anderson says it would be nice to sell a guitar in Montréal, but that’s not his primary goal. He’s excited about exhibiting his work alongside some of the world’s greatest guitar makers and to begin establishing his own reputation as a luthier.

“What I’ve heard is, I need seven touches before a purchase,” he says. “This is my first touch.”