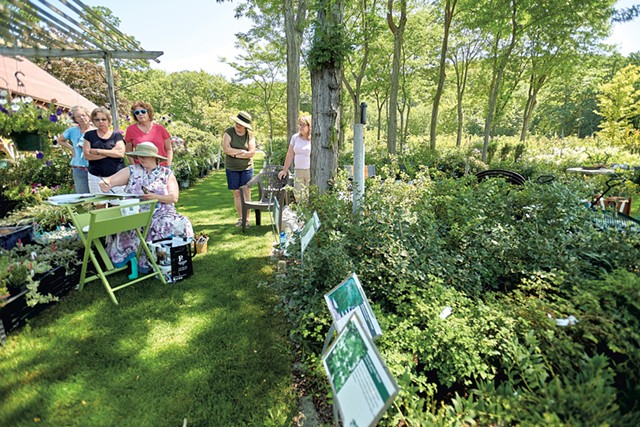 Surrounded by flowers, six women gathered in the shade of trees and trellises to watch Vermont watercolorist Ginny Joyner demonstrate plein air painting last week at Horsford Gardens and Nursery. Joyner's watercolor class was one of 20 outdoor art workshops scheduled this summer at the Charlotte business for the inaugural season of "Art in the Garden."

"For years, people who were artists or took art classes have said, 'I'd love it if we could paint here,' or, 'Do you mind if I photograph here?' So we decided it would be good to let the artists know that they could come and use our grounds," said Eileen Schilling, who owns Horsford with her husband, Charlie Proutt. "We put it out there, and we got a great response."

The artists are charged nothing to use the nursery, which promotes them on its website, Instagram and Facebook pages, as well as in its email newsletters. "One of the reasons I wanted to not charge the artists is because renting a space can be very expensive," said Schilling. "Knocking that expense out means more people can be exposed to art."

Artists submitted their class suggestions, which were reviewed by Schilling for appropriateness for the space. Once approved and scheduled, the artists were responsible for setting their prices and marketing their classes. Those who came to Joyner's three-hour class paid $35, or $45 if they needed supplies.

Joyner arrived 30 minutes ahead of her students to scope out her spot and prepare.

"The concept for today's class is that we're going to do some little paintings that are not going to take a ton of time," she explained as she set up a small table with paints and brushes. Joyner knew of Horsford because Schilling had taken a few of her classes through Access Community Education at Champlain Valley Union High School in Hinesburg. Joyner teaches at CVU and in her Colchester studio.

"The grounds are really interesting, with vistas and plantings," she said. "You walk, and it's like being in a little conservatory with lovely buildings and beautiful greenhouses, so there are quite a few choices as far as where you can paint."

Once her students arrived, Joyner gathered them around her chair and painting table. "I'm going to show you how I sketch with light pencil and simple lines, flattening what I see into two dimensions," she told them. "Start with the architecture first, then add the foliage." She quickly scribbled in the greenhouse, then the pink and white lilies at its base. As Joyner began applying watercolor on top of her sketch, she advised not to scrub but rather to use a lot of water to move the paint around and minimize brush strokes.

Then she stopped to let everyone walk around and find a spot to set up.

Two students brought their chairs and supplies to the grass path near Joyner, in view of the greenhouses. Others focused on the architecture of the garden shop; a trellised walkway hung with baskets of pink, purple and white petunias; and a close-up color study of the reds, greens and yellows of variegated coleus.

"That's what makes this a great class: Everyone is not two feet away from each other, painting one single thing," Joyner said. "I encourage people to take a break and walk around and see what other people are doing."

It wasn't only the artists walking around. Customers also stopped to view the paintings in progress at the historic nursery.

Schilling and Proutt purchased Horsford in 1985 when it was in foreclosure. "There was nothing saleable on the property, and someone paid us $500 [for] whatever they wanted out of the fields before we bulldozed everything and started over," Schilling said. "People who haven't been here in 25 years can't believe they're in the same place."

The nursery first began in 1883, when botanists Frederick Hinsdale Horsford and Cyrus G. Pringle went into the business together. In 1893, Horsford bought out Pringle (the namesake of the herbarium at the University of Vermont) and created F.H. Horsford Nursery on the land it occupies today.

"It's just naturally very beautiful," Schilling said. "When Horsford chose the land, it happened to be ideal soils, and we've just kept it going.

"People like to classify us as a garden center, but we're really not," she continued. "We're the oldest and probably one of the very few retail nurseries left in the state. There used to be a lot, but it's a hard business to keep going. It's sort of like running a restaurant: You know your product has a shelf life."

Schilling noted that not everyone visits the nursery to buy plants. "Everyone's welcome to just come, see what it is and walk around," she said. "We know of kids who ask their parents if they can go to Horsford. It's really like going to a park."

Caroline Alves, a student in Joyner's class, agreed. "When I've come to buy plants, I've actually thought how nice it would be to paint here," the Monkton resident said. "All the colors, all these beautiful little buildings, and the antique greenhouses. It's perfect."

"I think it's a great place to have a summer arts series," said Beth Farnsworth, a summer resident of Lincoln. "I was very enthusiastic about coming here, because there's just so much material to work with. It's Vermont summer, that's really what it says."

The remainder of this year's Art in the Garden workshops feature classes in mixed-media journaling for gardeners, garden dances, basket weaving, pressed-leaf collage, and spirit totem figures. The last class of the season is on September 8.

"It's going really well," said Schilling, "and we plan to do it again next year."