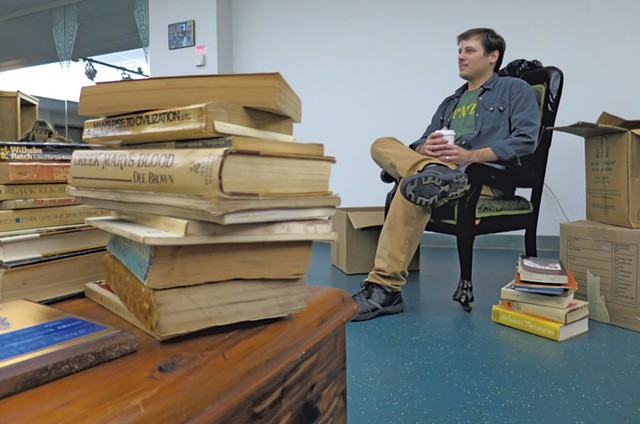 Rockers Van Halen and Sammy Hagar performed the suggestive "Finish What Ya Started" way back in 1988, long before the expression was appropriated for a "Keep Calm and..." poster. Whether encouragement or admonition, it's sound advice for anyone who has embarked on a daunting task, from a marathon to math homework. And it's advice that Seth Jarvis ignored — on purpose.

Earlier this year the Burlington actor, director and playwright received a commission from the Flynn Center for the Performing Arts, which he has used to develop a new work titled Transitions. The play debuts this Friday, November 20, at the FlynnSpace. But this is not a conventional play with a beginning-middle-and-end arc over one or two acts. Instead, Jarvis explains, "The idea behind it was to create an unfinished play." Say what?

Call it "devised theater" or just experimental, Transitions is an intriguing exercise in collaboration. Rather than directing one play himself, Jarvis invited six directors — Chris Caswell, Marianne DiMascio, Robin Fawcett, Tracey Girdich, Joan Robinson and Geeda Searforce — to use his provided framework and come up with their own stories.

"I created certain specifics for place, circumstance and character," Jarvis explains. That is, each 15-minute "short story" within Transitions features two women, and each takes place in a living room that a character is moving into or out of. In other words, someone is in a state of transition. From there, Jarvis says, "I left it up to them how to approach it."

The directors could finish writing the script on their own or collaborate with their actors — or a combination. Some employed improvisation to work out their scenes.

Caswell, who is directing Girdich and Hannah Wall in a piece titled "Cookies," says her actors read the script and "made it so funny — but now it's creepier." With a relatively short rehearsal period, she says, "There is definitely more pressure than usual. It also gives it a workshop feel — we're learning as we're doing." Having directed only a few times before, Caswell thinks the experience has made her a better actor.

DiMascio is a writer and actor for the sketch-comedy group Stealing From Work, but this is her first time directing. She chose to complete the writing for her section, which has the enigmatic title "Fear of What." And, she notes, "Seth wrote part of the story, but not necessarily the beginning." It also lacked a climax. "I knew I needed to build in some conflict — that was the first challenge," she says.

Without wanting to give too much away, DiMascio reveals that Jarvis' script had "used very big words — words I had to look up. So that became a part of the language and the story." Accordingly, piles of books will figure into her scene. Her actors are Caswell and Linda Ianuzzi, who will play sisters.

Like Caswell and Girdich, other directors also act in another's section. That made them privy to two stories within Transitions, but last Sunday's rehearsal was the first time the entire group got together to watch the full work. Only Jarvis and stage manager Maria McGrath had seen all the pieces. In addition, musicians Randall Peirce and Polly Vanderputten had been convening with directors and developing motifs for transitional music, notes Jarvis. During the show they'll perform live on accordion and cello, respectively.

Asked why he chose all female directors and actors, Jarvis says it was in part "a practical consideration — it's one of the parameters that creates consistency between the themes." But just as importantly, he adds, "Burlington has an abundance of very talented female artists that I wanted to work with." Plus, given the "very welcome conversation" about diversity in the arts, Jarvis says, "It was an opportunity to not be part of the problem."

Does the concept of transition reflect something broader for the playwright? "Definitely," Jarvis says, citing a physical move, a new job, a marriage — "life-changing things, upheavals both positive and negative" — over the past year. "It's been really interesting," he adds, "exploring transitional processes."

That exploration may well appeal to other thespians, too. The format of Transitions is clearly malleable and, with a minimal set, inexpensive to produce. DiMascio sees it as appropriate for a variety of theater groups, from high school to professionals.

For his part, Jarvis is pleased that "people embellished [the script] in ways I'd not considered. It's been rewarding to see that the writing could support all these different stories. It's been like a master class."