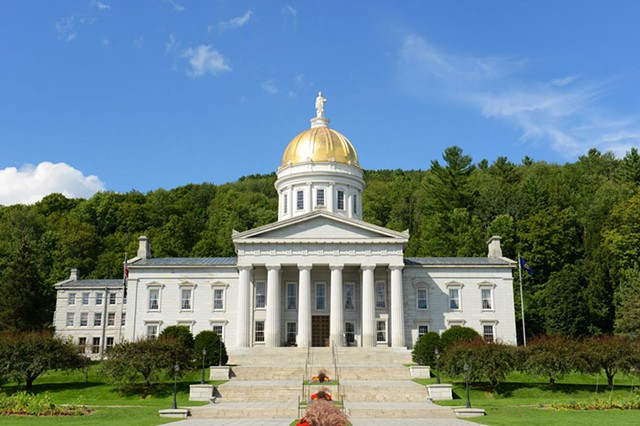 On Monday morning, a new mood could be felt in the Vermont Statehouse. Adjournment seemed imminent, and momentum was building toward departure. Principles that seemed crucial throughout the session began to feel more ... disposable. Or, if you prefer, their disposal seemed inevitable in the rush to close up shop this Saturday, May 18.

By day's end Monday, the disposal process was well under way, and the carnage was coming into focus. There was one advance on a key bill: A Senate measure to establish a 24-hour waiting period for handgun purchases finally cleared the House Judiciary Committee after a weeks-long delay. It seems to be on track for passage this year, though Gov. Phil Scott hasn't committed to signing it.

In other areas, the news was not so good. The two Democrat-dominated chambers of the legislature continued their cold war over competing priorities, with the Senate pushing a minimum wage increase and the House fighting for paid family leave. Then, on Monday evening, lawmakers acknowledged that a bill to legalize the retail sale of cannabis would not pass this year.

It was the perfect portrait of a session that may be remembered for the Democrats' failure to wield the political power they won in the 2018 election. It was clearly more of a struggle than it could have been, and many are feeling the strain.

"I'm a high-energy person," said Senate Majority Leader Becca Balint (D-Windham). "This weekend, I took not one nap, but two. I never do that. I feel really profoundly tired. I've been trying to figure out why."

Balint offered a few ideas: angst over President Donald Trump and events in Washington, D.C.; increased communications from constituents over social media; and the high expectations that arose from last November's vote, which gave the Democrats and Progressives a combined supermajority in the House and increased their supermajority in the Senate.

"The voters gave us a pretty strong mandate in 2018," said Progressive/Democratic Lt. Gov. David Zuckerman. "2020 will be equally so, if not stronger. This two years is the best opportunity I've seen to take bold action. We've made some progress, but I don't think we've made as much as the voters wanted."

Especially on issues the Democrats emphasized in last fall's campaigns. "We came in with really clear priorities around minimum wage and paid family leave," said Rep. Sarah Copeland Hanzas (D-Bradford). "We ran on these issues and climate change. The voters gave us strong majorities. And yet we seem reluctant to put forward bold versions of these ideas."

Climate change has been a particular disappointment. Some modest steps have been taken, but nothing that comes close to fulfilling expectations — or that would get Vermont back on track to meeting its climate action goals.

Elsewhere, items on the Democratic agenda have followed three paths. A few have moved briskly, such as the twin measures to protect reproductive rights in state law and the state Constitution.

There are those that have failed to cross the finish line, or seemed destined to die. The cannabis bill is now at the top of this list, but there are others: a bill to tighten regulation of toxic chemicals and another that would toughen rules on hydrofluorocarbons (a greenhouse gas used in some commercial applications), a ban on corporate political contributions and a study of the state's dysfunctional public campaign financing system. That's right, a study failed to move. Sad.

The final category is the largest. These are bills that have moved through the legislature or may do so by session's end — but with substantially more difficulty than might have been expected. Atop this list are the minimum wage and paid family leave bills. Earlier in the session, the House quickly passed a paid family leave program while the Senate approved a boost in the minimum wage to $15 an hour by the year 2024.

Recently, each body has substantially weakened the other's pet bill. Last week, the Senate Finance Committee reduced the paid leave program's benefits, significantly lowering its costs. On Monday, the Senate Appropriations Committee moved the bill to the full Senate without endorsing it — an unusual step that signals deep unease.

Also Monday, the House Appropriations Committee approved a diluted version of the minimum wage bill and, even then, only narrowly approved it. As the bill now stands, the minimum wage would increase by 2.25 times the inflation rate until it reaches $15 an hour — which, at current projections, wouldn't happen until 2026 or later.

"I'm very disappointed that minimum wage and paid family leave are being watered down," said Rep. Robin Chesnut-Tangerman (P-Middletown Springs), leader of the House Progressive caucus. "It's questionable whether half a loaf is better than none."

Many other bills have been moving slowly, often bogged down by differences between House and Senate. For instance, a universally popular bill to test all drinking water sources in schools and childcare centers has dragged on endlessly and is still being worked out in conference committee.

Senators are particularly rankled by "the number of bills that just aren't moving," said Sen. Dick Sears (D-Bennington). "It has been frustrating at times." Indeed, several Senate bills were assigned to House committees in mid- to late March — only to stall for several weeks.

Sen. Phil Baruth (D/P-Chittenden) believes that some of the House-Senate tension comes from a change in gubernatorial strategy. "In the last two years, Phil Scott drew a red line on taxes," said Baruth. "That united the House and Senate. This time, by intent or inaction, Scott decided to do nothing. Without a common enemy, you start fighting among yourselves."

Or you start trying to craft legislation that might win the governor's signature — which can devolve into negotiating against yourself.

Part of the House's problem is a result of the November election, which brought forward a massive first-year class of 40 new state representatives. And fully half of the House's 14 standing committees have new chairs this year. "Bills have come out more slowly from committees with new chairs," said Copeland Hanzas, who was appointed in January to lead the House Government Operations Committee. "My committee is mostly new to our policy area. For a first-time chair, that's difficult to manage."

Two of the bitterest House-Senate standoffs have involved a pair of school-related bills: the lead testing measure and a bill to allow some school districts a one-year delay in implementing consolidation plans under Act 46. The former is being worked out in a conference committee. The latter has fallen victim to differences between the two chambers' education committees.

Oh, snap. And Baruth snaps back. "The House Education Committee got into the weeds [on the bills]," he said. "And having gotten into the weeds, they tend to think their view is correct with a capital C."

And now cannabis will have to wait 'til next year. Which means a full tax-and-regulate system may face further delay beyond the projected full retail implementation date of July 2021. That's a bitter pill to swallow for those wanting to establish cannabis-related businesses and for the many lawmakers who don't necessarily support legalization but prefer it to the current law, which only allows personal cultivation and possession.

The legislation is complicated, to be sure. It would create a regulated marketplace for a product, complete with permitting, licensure, oversight, allowable advertising and tax collection. Still, it passed the Senate easily on March 1, with more than half the session remaining. Somehow that wasn't enough time for the House.

Speaker Mitzi Johnson (D-South Hero) had explanations at the ready. The bill touched on the jurisdictions of seven different committees, which slowed its progress. And, she added, "This was never on our must-pass list for this year."

Sure. But there are only a handful of must-pass bills each session: the budget, a revenue bill, the transportation bill and the capital expenditure bill. A lot more than that is expected. And Copeland Hanzas, whose committee had primary jurisdiction over the cannabis legislation, said her panel laid the groundwork for passage. "It came out of my committee on a 10-1 vote," she said. "I think it's just not a priority. It's a shame."

And a failure to meet the hopes of all those Democratic voters. "There are high expectations," said Balint. "We put those on ourselves, as well. I want us to be using the power we have."

This week's delay notwithstanding, virtually everyone sees a legal cannabis marketplace as inevitable. And hemp farming has already become a booming industry, creating new business opportunities in Vermont and elsewhere.

Longtime Montpelier lobbyist Todd Bailey is seeing fields of green. His firm, Leonine Public Affairs, has begun a national business in cannabis advocacy, which he will lead.

"If you have a functioning seed-to-sale system used by regulators and the businesses, everyone would know where the seeds came from, who grew them, who harvested, and who processes and sells," Bailey said.

But Trace isn't the only outfit in the field. "The industry is quite competitive," said Bailey. "There can be issues in the legislative arena over how contracts are granted. We will have to make sure laws are fair and sensible and regulations are written well."

The business of hemp cultivation began to explode, according to Bailey, thanks to the 2018 federal farm bill. It allowed states to regulate commercial hemp farming, and many are rushing to get on board. "States like Florida, with significant losses in the orange crop, will be aggressive on hemp," Bailey said. "This could be a $22 billion industry within three years. It's a huge opportunity."

Bailey had been looking for a way to move his work to Philadelphia, where his wife recently started a new job. It's a convenient hub for the heavy travel schedule he expects to maintain — and a place where he has roots, as you can tell from his Philly sports-heavy Twitter feed.

That will mean changes in Leonine's Statehouse personnel. Nick Sherman (whose father, veteran lobbyist Bob Sherman, cofounded Leonine, back when it was known as Kimbell Sherman Ellis) will be president of the Vermont government relations team, spearheading the efforts of four staff lobbyists in one of Montpelier's biggest advocacy firms.