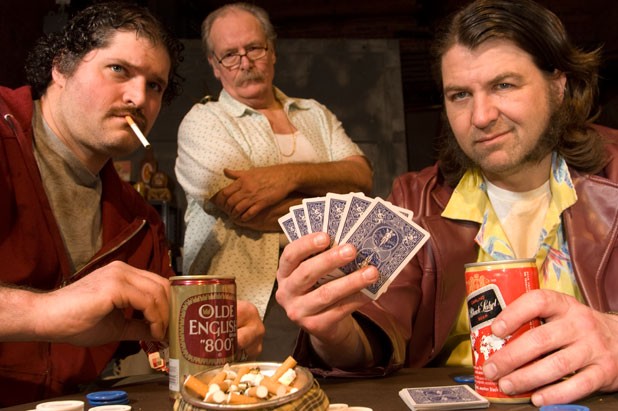 Anglo-Saxon profanity peppers everyday speech, for many of us with great regularity. Rarely, however, does prolific cursing become part of our profession, let alone something we hone into an art. Playwright David Mamet has an exceptional ear for how people really talk, and his characters curse up a storm. He uses raw language not for shock value but to reveal raw emotion. Mamet paints anger, frustration, pain and tenderness in his troubled male characters. Innumerable variations on “fuck” turn out to be effective brushstrokes for illustrating these feelings.

The Green Candle Theatre Company’s current production of American Buffalo (1975), at the Outer Space Café in Burlington, demonstrates how funny, moving and beautiful Mamet’s seemingly simple characters are. The power comes from riveting performances by the play’s trio of actors: Dennis McSorley, John Alexander and Aaron Masi. “Don’t miss it” seems like a reviewer’s cliché, but I’ll say it anyway: Don’t miss it. The actors generate an intense chemistry that sweeps the audience into the story. This is what live theater, at its best, is supposed to do.

Set in the mid-1970s, American Buffalo takes place at Don’s Resale, a junk shop located in an unnamed American city. Middle-aged Don (McSorley) has taken the young Bobby (Masi) under his wing. Bobby works for Don as his helper around the store, but the elder man is clearly giving him more than a business education. Don dispenses advice ranging from the streetwise (“Action talks and bullshit walks”) to the schoolmarmish (“Breakfast is the most important meal of the day”).

Don’s friend Teach (Alexander) drops by the shop, agitated about a big loss in a poker game the previous night. When Bobby steps out on an errand, Don fills Teach in on his next big score. A coin collector recently came into the shop and bought a buffalo nickel, which Don failed to recognize as valuable. Don and Bobby have been casing the collector’s house, with the goal of stealing and reselling his entire collection.

Teach convinces Don that Bobby is too green for the job and that he, Teach, should do it instead. Don reluctantly agrees, but insists on enlisting another associate to help. When Bobby reports that the mark has gone out of town, the older men arrange to meet later that night to execute the scheme. Don makes up an excuse to exclude Bobby while trying to spare his feelings. When plans go awry, tempers flare dangerously. But the men realize that, ultimately, friendship trumps business.

McSorley’s brilliantly understated performance as Don forms the heart of Tara Lee Downs’ skillfully directed production. McSorley establishes how carefully Don maintains an even temperament, in comparison with the jumpy Bobby and mercurial Teach. He moves deliberately around the stage, looking at his companions over the top of his reading glasses, analyzing their wilder assertions thoughtfully before reacting to them. McSorley keeps his character’s anger under control, showing how Don struggles visibly when it bubbles to the surface. Learning of a friend’s betrayal, however, leaves Don crestfallen, and McSorley’s jowls droop as his eyes well with emotion.

The strongest bond in American Buffalo is the oddball, father-son relationship between Don and Bobby. Masi plays the young man-child with seeming delight — he’s scruffy, cocky and eager to please. He walks with an exaggerated swagger, points his chin in the air and keeps a manly Marlboro tucked behind one ear. As much as he tries to narrow his eyes with apparent knowledge of the world, however, they remain doe-like, conveying his innocence and desperation for Don’s approval.

Alexander portrays anger-management-challenged Teach with gusto. He embodies his character’s high-strung physical energy, always bumping into furniture as his mind races ahead of his feet. As he frequently brushes back long, stringy hair from his face, his eyes glow with a toxic mix of sleep deprivation and scheming. Alexander conjures the con artist’s perpetual undercurrent of hostility, which erupts with Tourette’s-like inappropriateness. “The only way to teach these people is to kill them,” he sputters about some friends. “Guys like that, I like to fuck their wives,” he fumes about a business associate.

The Outer Space Café proves a wonderful venue for such cutting dialogue, with terrific acoustics and a cozy layout for the one-set show. The corner of the space that serves as the stage has one wall of brick and one of sheet metal (nicknamed “The Iron Curtain” by owner Chantal Beliveau). This forms a pitch-perfect backdrop for the messy junk-shop interior. Scenic designer Michael Smith and props designer Rick Ames furnish Don’s world with a remarkable assemblage of kitsch and crap. Authentic ’70s-era details — Naugahyde, tiddlywinks, Cutty Sark, Rolodex — might induce polyester flashbacks in those old enough to remember.

Mamet’s characters in American Buffalo are rough folk from society’s fringes who don’t talk pretty. And yet their language and their lives are real. In Green Candle’s production, the terrific trio of actors makes music from Mamet’s swear-laden score. But in the end, the choruses of curses help make the story sing.