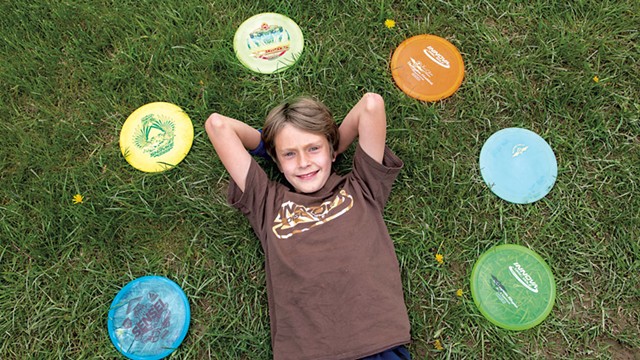 The boy stares across a long, sloping field of grass beneath late-afternoon sun, tugging absently at a sweatband on his wrist. With an orange plastic disc in hand, he begins his throwing motion, his body winding up like a spring. Lightning fast, he uncoils and snaps his arm into a well-trained throw, unleashing the disc at a shocking velocity. My eyes widen as I calculate the rapidly expanding distance this kid has just thrown his drive — a throw much farther than I, a 43-year-old (somewhat) grown-up man, have ever achieved in two decades of playing disc golf.

"What is that, a couple hundred feet?" I ask, hopefully masking my alarm and growing sense of inadequacy.

The boy, 11-year-old Finn Etter of Burlington, overhears my question to his father, the third member of our trio on the disc golf course at the Charlotte Town Beach. Finn flashes a grin as he picks up his disc bag.

"Probably about 250 or so feet," Glenn Etter answers. "This hole isn't too long," he adds. "He might have gone a little over."

Glenn laughs with a familiar, focused look in his eye as he readies his own drive, which will be better than mine but shorter than his son's. I don't tell him how much that comforts me as the round progresses and Finn goes on to casually stomp us both.

Not that there's any shame in losing to the kid. An amateur member of the Professional Disc Golf Association who plays on the PDGA Junior tour, Finn is among the best young disc golfers in the world. In 2018, at 8 years old, he won the U.S. Junior Disc Golf Championships. He signed a sponsorship deal with manufacturer Innova Disc Golf before he turned 10. In other words, Finn has been beating older players like me for a long time.

Disc golf has enjoyed increasing popularity ever since "Steady" Ed Headrick invented the Frisbee in 1966 and the disc golf basket in 1977. Even for non-prodigies, the game's appeal is easy to see. For one, it gets you outside, often in serene settings. And while it's fun to play with friends, it's just as easy to pop out for a solo round — an attribute that drew many new players to the sport during this past year's quarantine.

Disc golf is also, for the most part, free. All you need are discs, which are generally cheaper than $15, and a course with baskets — each typically a long metal pole with hanging chains surrounding a catch basin, usually yellow.

Disc golf courses are easy to find these days, from those in public parks, such as Center Chains in Waterbury's Hope Davey Memorial Park and the Charlotte beach course, to numerous options at area high schools and colleges. The Smugglers' Notch Disc Golf Center features two courses, Brewster Ridge and Fox Run Meadow, that are ranked among the top 15 in the country and charge fees to play.

When I started playing in the late 1990s, disc golf was basically just a bunch of people with beers and Frisbees. But the sport has experienced a sea change and become not only popular but highly organized.

Glenn has witnessed the transition, too. As we watch Finn casually sink a putt from 20 feet away, Glenn reveals that his early playing mirrored mine.

"Well, I'd just use Frisbees and toss them around on campus when I went to college," he says. "I didn't really start playing properly until Finn started when he was 4, after we moved to Vermont. By then, there were so many more opportunities in place — organizations and tournaments — especially once Finn started playing on the junior tour."

Finn fell in love with the game quickly. For the first year or so after his family moved to Vermont from Eugene, Ore., they lived near Oakledge Park. Finn and Glenn would set up pop-up baskets and use the Burlington park as a makeshift course.

"He just wanted to play all the time," Glenn recalls, "even if it was snowing."

At age 5, Finn played in his first tournament at Smugglers' Notch. Three years later, he won the U.S. Junior Disc Golf Championships there by a whopping 16 strokes — and caught the eyes of many seasoned players. They included Chris Young, then president of Green Mountain Disc Golf Club and one of the sport's biggest proponents in Vermont.

"He was just so young, it was crazy," Young tells me by phone. "There weren't a ton of juniors at that point, so his game really stood out. To be that age and throw that smooth? Wow."

Back on the course, I ask Finn about playing tournaments and whether he ever feels nervous, especially since he often competes against older players.

"Not really," Finn says with a shrug. He tugs on the brim of his baseball cap as he recalls the 2018 junior championships. "There were some really good players there. But that's my favorite course."

Later, as Finn practices an assortment of putting techniques — one of which I will subsequently steal — I ask Glenn about his son's mentality and seemingly casual attitude toward a sport in which he is a genuine prodigy.

"My role is really about keeping things light and fun ... even if it's at a tournament," he explains. "But competition is fun to Finn; it isn't something that scares him. Mistakes don't bug him, either. He just moves on and throws the next disc."

"His mental game is unbelievable," Young agrees. "Honestly, 90 percent of this game is between the ears, especially in tournament play. The way he thinks and throws, he could contend for a world championship one day. It just matters how much he wants to put into it."

Prodigious skill aside, Finn is still an 11-year-old boy with more than just disc golf on his mind. He loves playing baseball and soccer. He's also an avid bird-watcher — another passion that began after his family's move to Vermont.

"I think my favorite bird is a purple-crowned woodnymph," Finn says after considerable deliberation as we reach the final basket.

"We saw that one in Panama, buddy," Glenn reminds him. "What about here in Vermont?"

Finn runs through his putts as he contemplates his favorite birds. The sound of the basket's chains rings through the park as he tosses disc after disc in quick succession, an exercise that's clearly routine.

"There's too many!" Finn protests with a laugh. Then, "I like the scarlet tanager."

Glenn explains that Finn pitched a Little League game the day before, so he doesn't want him to throw too many discs. Unfortunately, Finn hears this and quickly empties his bag, sending drive after drive flying through the blue Vermont skies.

With a rueful shake of his head, Glenn laughs. "I probably shouldn't have told him that," he says.

I suggest a game of P-I-G on the last putting green, in which a player has to match the previous player's shot. The penalty for a mismatched shot is a letter — P, then I, then G. Spell "pig," and you're out; last player standing wins. Glenn suggests we trim the game to Y-O, in light of the hour.

The new competition sparks something in Finn, who for the first time during our visit seems genuinely excited to beat his father and the tagalong writer.

Glenn misses a couple of tough putts and gets a Y and an O in short order. But I make the mistake of throwing some good ones and inflicting a Y on Finn — though I have a letter, as well. He and I are now in a sudden-death playoff, and I finally have a chance to win something. For Finn, this will not do.

I miss a 15-footer, opening the door for him. Determined to finish the game, Finn steps even farther back. He brushes a strand of hair from his eyes and stares calmly at the basket. One might expect a face of intense concentration, but the more seriously Finn takes the game, the more relaxed he seems to become. With a flick of the wrist, his disc hits the chains as straight as an arrow.

"You win," I say, as if the outcome had ever been in doubt.

Nonetheless, Finn breaks into a wide grin as he looks at his father.