Doll Fight! punch up the punk 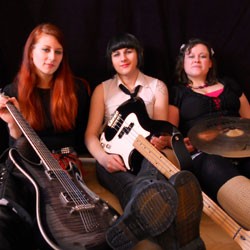 Vermont has a long, proud and loud tradition of punk rock, dating back to the very origins of the genre in the late 1970s. While seminal punk bands such as the Wards, and later the Fags, planted an anarchist’s flagpole in our collective musical consciousness, the scene has lacked a woman’s touch. Female-fronted bands, never mind all-girl acts, have been few and far between in the patchwork history of Vermont punk.

Since forming in late 2010, the Burlington-based riot-grrl trio has toured the East Coast, released a snarling debut album, Morning Again, and generally reminded the local punk populace that chicks can rawk every bit as hard as their male counterparts. And they’re out to get your kids, too.

On Friday, July 15, the band will play a fundraiser at Diversity Studios in Burlington for Girls Rock Vermont, a weeklong rock-music camp aimed at girls ages 10 to 18. Doll Fight! founded the day camp, which runs from Monday, August 8, to Friday, August 12, at Signal Kitchen in Burlington and is loosely associated with similar programs around the country. Girls will be placed into groups and taught to write songs and function in a band setting. They will also attend workshops on topics specific to being a female rocker, from self-esteem classes to self-defense. The camp culminates in a concert at the end of the week.

“It’s a mega empowerment fest,” says Doll Fight! drummer Jane Boxall, 30, who was an instructor at a girls rock camp in New York City. “It takes a lot of confidence just to feel like you’re allowed to play as part of the rock scene.”

She would know. Finding like-minded musicians for an all-female band in the Queen City proved challenging. But after a false start or two, it finally came together through that modern medium the Internet.

“It was all Craigslist,” says front woman Christine Mathias, 27, who founded the band. For roughly a year, the guitarist had posted an ad on the site looking for female musicians. “It took me a while to find the right people,” she says.

One of them turned up at the Monkey House in Winooski, at a show called the Rock Lotto. The night was sort of a social mixer that randomly jumbled musicians into impromptu bands. There Mathias met Boxall, who is a classically trained marimba player, as well as a drummer. The UK-born percussionist says her seemingly disparate disciplines actually complement each other.

She and Mathias soon formed an all-girl punk band called Pink Fury. But that outfit, which included a violin player, played together for just six months.

Around the time Pink Fury called it quits, bassist Kelly Riel posted a Craigslist ad in an attempt to form “a queer ska band.” Riel, 23, had played in a slew of punk and ska bands in her home state of Connecticut before moving north to attend the University of Vermont. Mathias saw Riel’s ad and contacted her.

“We’re not really a 100 percent queer ska band,” says Boxall, laughing. “I guess we didn’t quite get there.”

Mathias, who studied jazz saxophone, played in a number of bands while growing up outside of Boston, later in Portland, Ore., and while attending graduate school in Pennsylvania. Prior to founding Doll Fight!, the guitarist had been playing with a local jam band, Freight. And as with most of her previous bands, she was the only female.

“It was cool and totally fun,” Mathias says. “But I feel like I’ve faced certain issues as a female musician that male musicians might not have or can’t really identify with.” Those include being told that she’s “a good guitar player … for a girl,” and being hit on by audience members. “I thought it might be empowering to be in a group with people who are all sort of on the same page.”

The members of Doll Fight! stop short of saying their connection resembles any sort of “sisterhood” — such sentiments would be unbecoming of a good punk band. Still, they find strength in their chromosome commonalities.

“It’s hard to say if it’s because of that or because of our personalities,” Mathias says. “But this is the closest I’ve felt