Green Slice, a Vermont-based and Belgian-made food product that's sold in hundreds of U.S. grocery stores, is expanding its footprint in the Green Mountain State.

Owner Véronique Beittel bought a warehouse in Bolton last month that she plans to use as a shipping center for her plant-based veggie dogs, ham slices and other products. In five years, she said, she'd like to move production of the food itself from Belgium to Bolton.

Beittel started Green Slice in 2017 and runs the company with her husband, Matthew Beittel, from their home in Richmond. The vegan, gluten-free, organic deli foods are manufactured at Véronique's family food business in Belgium. Though it's made in Europe, Green Slice is sold only in the U.S., much of it through Idaho-based Albertsons, the second-largest U.S. grocery store chain after Kroger's.

The company recently signed an agreement with Shaw's supermarkets that will put Green Slice in 100 stores in the Northeast, Véronique said.

She moved from Flemish-speaking Belgium to the U.S. in 2002 for an internship with the food corporation Sara Lee. The experience she gained as a marketing manager for brands such as Jimmy Dean and Hillshire Farm has helped her navigate the intense competition for supermarket shelf space in the U.S. — an environment that hinders many small food producers.

"I know how to approach a retail store; I know all the lingo. I'm not afraid to pick up the phone and talk to Kroger's," Véronique said.

But she, too, has found it tough to work with retailers and distributors. It's much easier to get a product into stores with the backing of a brand such as Jimmy Dean, which has millions to spend. Stores charge thousands of dollars — sometimes hundreds of thousands — for a place on their shelves.

"You're excited at first: You're going to be nationwide," she said. But then the costs of doing business with the stores, and with the distributor, mount unexpectedly, she said, until it no longer makes financial sense to work with them.

"They charge you so much for who-knows-what that, at the end of the day, you ship the product for free," she said. That's why she'd like to increase her direct online sales, and it's why she bought the Bolton warehouse.

"I just want things to come closer to home," she said.

Matthew left his position as chief financial officer at OnLogic in South Burlington earlier this year to work full time at Green Slice, and his expertise helps a lot, his wife said. She still works with a national grocery distributor who helps food producers get their product onto store shelves, and Matthew keeps track of the costs. The two are the company's only employees.

Green Slice is sold in about 500 grocery and health food stores out West, and Véronique expects annual revenues this year to hit $1 million. In August, she received a $100,000 loan from the Vermont Economic Development Authority to buy a dilapidated former AmeriGas warehouse on the Winooski River in Bolton. The 2,700-square-foot structure behind the Bolton town clerk's office comes with five acres and a spectacular view of the nearby mountains. There's a Long Trail access point nearby.

"I could canoe home," said Véronique, who lives a few minutes downstream, also on the river.

Green Slice got its start after the Beittels moved to Vermont in 2010 from Washington, D.C. The couple discovered the state on a ski trip to Stowe. 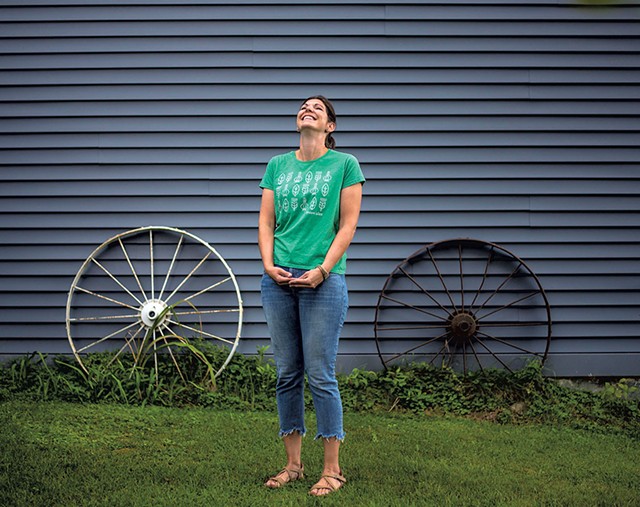 Véronique started a business as a distributor of genever, a malted Dutch gin made in Belgium and the neighboring Netherlands. She still distributes genever but decided to start making a plant-based protein product when her daughter, now 7, was a toddler. She was uneasy about the health impact of processed meats, noting that the World Health Organization has described hot dogs, ham, sausages and others as carcinogenic.

"WHO put processed meats in the same category with asbestos and smoking cigarettes," she said.

The alternatives to processed meats didn't appeal, either. She didn't like the look or feel of the meat-free products she found, and many used soy protein or gluten, ingredients she sought to avoid.

"That's when I realized there was an opportunity there," Véronique said. Through several trials, she and her cousins in Belgium settled on a meat-like protein that's based on organic pea protein and contains vegetables such as leeks, carrots and beets, with spices for flavor. She chose the name of the product with help from her young daughter.

Vegetarian protein has been a huge market for years. Unilever reported in March that U.S. shoppers spent more than $7 billion on meat and dairy alternatives in 2020. Included in that category is the large array of meatless burgers, many based on legumes such as black beans. A few producers are based in the Green Mountain State.

Vermont Bean Crafters in Warren makes a vegetable-based protein that it sells as burgers, producing close to 5,000 a week.

"Our burgers aren't necessarily trying to emulate meat," said owner Joe Bossen. "We focus on basically trying to help make it easier for people to eat whole foods at home, or in restaurants, wherever they are."

Earth Sky Time, a farm in Manchester, produces a few thousand of its vegetarian VT Goldburgers a week, distributing them to local food co-ops. The burgers, made of ground-up vegetables with flax seed, rice, oats and sesame seeds, are also not intended as a meat alternative, said farm co-owner Oliver Levis.

Véronique, who occasionally eats meat, said she didn't consider getting into the crowded veggie burger market.

"You can find burgers in every flavor, every type of ingredient," she said. "I didn't have the budget to compete with somebody like that."

Instead, she sticks to soy-free hot dogs and meat slices with a product that tastes like processed meat and feels like baloney. Though they are made in Europe, Green Slice products are sold only in the U.S.

"We want to focus on America; it's big enough for me," Véronique said. "I don't have world domination in mind."