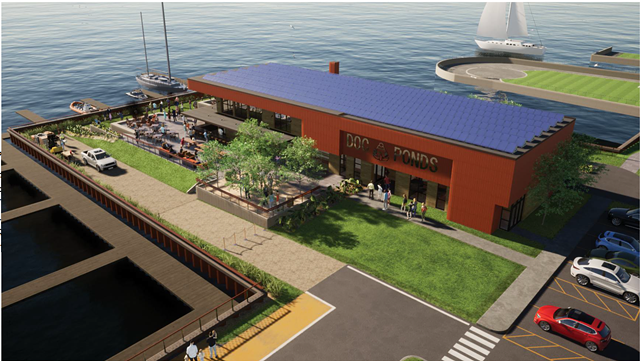 Hopes for a Burlington lakeside version of Stowe’s Doc Ponds have been dashed, according to the restaurant’s co-owner, Eric Warnstedt.

Lake Champlain Transportation submitted preliminary plans for a 6,500-square-foot restaurant on its King Street ferry dock property to the city on November 5, 2020. Seven Days reported on July 7 that the proposal had been stalled by questions about public access from the city's Development Review Board.

In that article, the project’s architect, Steve Roy, noted that Lake Champlain Transportation needed to maintain the ability to work on ferries in the marina. “Right now, it’s just in limbo, and they are deciding what they want to do,” he said of the project.

Warnstedt, who also co-owns Hen of the Wood in Waterbury and Burlington and Pro Pig in Waterbury, said in a written message on Friday, July 30, that “Doc Waterfront is dead.”

He explained that the waterfront restaurant “just [wasn't] workable given the marina security and the need for the ferry company to have some access to the water.”

Warnstedt lamented “what would have been a restaurant with a huge lawn for games and music, as well as a public walkway and viewing platform,” describing the shelving of the project as a loss to both the public and the local economy.

But he did offer a glimmer of hope: “Hopefully, in the future, we will find a way to move forward with something on that amazing property.”

The project’s suspension was news to both Scott Gustin, Burlington’s principal city planner, and Roy, the project architect, when Seven Days reached them on Monday.

Gustin said he’d been expecting to see a second sketch from Lake Champlain Transportation. “Restaurants are an allowable use,” he noted, that comply with public access requirements for the waterfront. However, he added, “I don’t know what’s going on with the ferry company’s needs down there.”

“This is the first I’ve heard that it’s dead,” Roy said of the project. “Last we heard, it was on hold with an unknown future. But it’s Lake Champlain Transportation’s property, and it’s their decision.”

Emails and a call to Lake Champlain Transportation were not immediately returned.