Places to Spot Snow Geese and Hawks This Fall 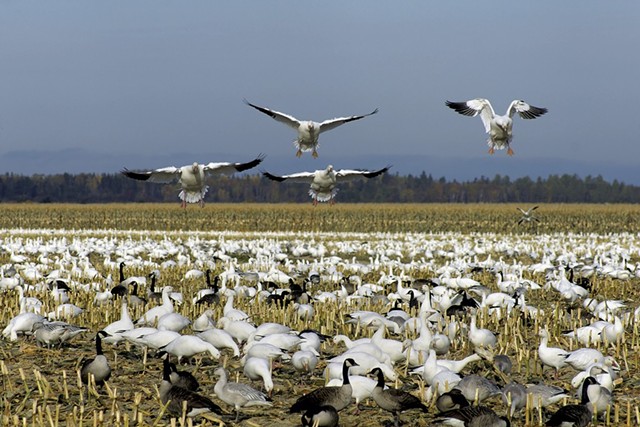 This summer my family went on a mid-week camping trip at one of Vermont's state parks. We had a great time, but when we emerged from the wilds on a Friday afternoon, we found ourselves packing up our car in an extremely crowded parking lot. As we traipsed back and forth with stray pieces of gear, we interacted with more people than we had since March, and I discovered that my tolerance for crowds, never high to begin with, had decreased.

As the nights get nippy and the leaves start to change, I'm strategizing about how to get outside without encountering hordes of fellow leaf peepers. My current plans for this fall center around some of Vermont's more dramatic seasonal bird migration events.

On one of my first ornithology field trips in college, we went to the New Jersey shore on a raw, rainy day and looked out at hundreds of black dots bobbing in the gray ocean. The highlight for me was when we saw a larger black dot, which we thought at first might be a seal, but eventually decided was some kind of inanimate object — maybe a bag of garbage.

With that underwhelming experience in mind, I wanted to make sure that I create strong, positive memories around bird-watching for my family. So I spoke with Bridget Butler, also known as the Bird Diva, to get some tips on setting my family up for a successful birding event.

She approved of my idea for putting ourselves in the path of large migrating birds and gave me some hot tips for where to find hawks and snow geese (see below). But she also said this: "It's not that you have to go on a birding trip; it's being in the moment to react to what you're seeing."

For example, Butler said, if you go to the beach where you went swimming in the summer, you can stop and notice who is swimming there in the fall. For another close-to-home option, she recommended Project FeederWatch, a citizen science project that starts in November and costs $18 to join. If you register, you'll get detailed but simple instructions and a kit that includes posters of common birds. I just signed up my family. Even if my middle-schooler doesn't get excited about it, it feels good that we'll be able to be a part of something and contribute data to this project.

If you do go out in search of fall migrants, Butler has a few tips. First, she recommends finding a good podcast for the car ride and packing a ton of snacks.

Next, for hawk-watching, warm, sunny days near mountains are best. That's because migrating is exhausting, so hawks take advantage of warm air that builds during a sunny, fall day. As the air pushes up against a mountain, birds can ride the rising air up until they hit the "sweet spot" where they can soar. She advises keeping an eye out for a very cool phenomenon called kettling, which she described like this: "Once one bird finds the rising air, it will start riding it up, and others will notice and join, until you can see lots of birds spiraling up and then shooting off."

If you check the weather in September or October and see a forecast for a clear day with winds out of the north, those will likely be good days for hawk-watching. 11 a.m. to 2 p.m. is usually the busiest time of day. Many of the places listed here will have people on the mountain counting hawks, and they'll be happy to explain what they're seeing. Just be sure to pack face masks.

If you want to learn how to identify hawks, silhouettes are the way to go. There is a good two-page printable PDF of hawks of the Northeast here.

Another thing Butler likes to talk about is where these birds are coming from and where they're heading. Most hawks have been living in our area and are heading to the southern United States for the winter. But snow geese are coming from far up north in the tundra. Butler suggests identifying the islands up in the Canadian Arctic and Greenland on a map when you get home to get an idea of how far they've come by the time they hit Vermont and New York.

October and November are the months to see snow geese. They migrate at night, when it's cooler, and rest and relax during the day. On a day with winds out of the north, following a clear night, you should be able to see large, noisy groups of these football-size birds.

Butler suggests a few particularly fun things to look for with snow geese. First, watch them coming in for a landing. You'll see hundreds of them, tipping back and forth to relieve the air pressure coming over the tops of their wings. "It's beautiful, like leaves falling out of the sky," she said.

Another thing she suggests is playing an avian game of Where's Waldo. Most snow geese are white with dark wing tips, but the slightly rarer blue morphs have white heads and blue-gray feathers through the neck and body, "kind of like tuxedo jackets." See if you can find them. Her final suggestions: dress warmly and drive with the windows down — these birds are loud!

Dead Creek in Addison used to be the hot spot for migrating snow geese, and you can still see them there. Call the visitor center to find out how many birds are there before making the trip. But to get even closer than you can at Dead Creek, Butler suggests driving on the little roads along the lake in New York from Rouses Point to Plattsburgh. (Remember to check travel maps at accd.vermont.gov before you go.) On a good day, there will be tens of thousands of snow geese in the bays, she says, "and you can almost reach out and touch them!"

Where to Watch for Fall Birds