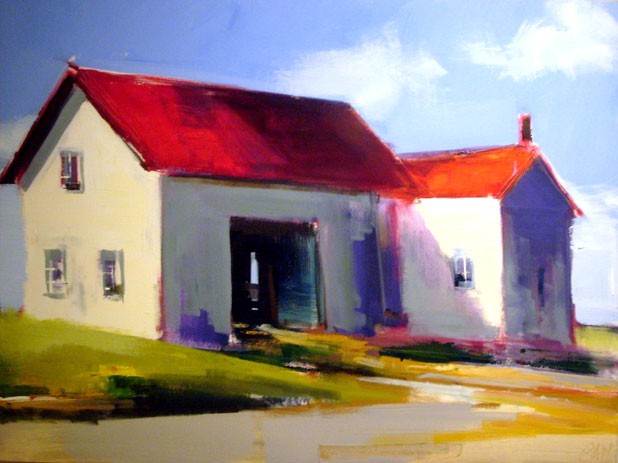 The summertime landscape exhibition is a staple in Vermont, but as the days grow shorter and chillier, the bright, colorful shows of the season begin to recede. At the West Branch Gallery and Sculpture Park in Stowe, however, the colors of summer linger in “Fresh Air,” an exhibition of paintings billed as “landscape- inspired.” While it showcases seven painters, selections from West Branch’s regular stable of artists are also on view.

Collage, the form Henri Matisse famously referred to as “drawing with scissors,” appears in the works of Mariella Bisson, which are clad in Conté-crayon-like hues. “Bouldering” is a 20-by-16-inch collage and oil focused on a pile of rocks in the woods. A stand of dark trees in the center of the composition contrasts with the lighter earth tones found nearby, and Bisson’s sturdy arrangement of horizontals and verticals gives the image a jumbled feel. Her 34-by-74-inch “Palenville Summer Panorama” is a mixed-media collage work depicting a creek with three white waterfalls cascading over boulders. The palette is limited, and line is paramount in crafting the scene. The straight edges of the collage pieces make for angular, jagged compositions.

Daniel Gottsegen’s pieces also regard forest interiors. Whereas Bisson’s works are built on earth tones, Gottsegen emphasizes blues and greens. His “Backwoods III” is a 38-by-40-inch treescape with a fairly shallow space. A tangle of small and medium-sized trunks is crowded into the foreground. Gottsegen’s “On the Woods Road,” 52 inches square, portrays a nearly buried path, perhaps an old logging road, progressing toward the right through dense woodland. His brushstrokes are short and choppy, and the forest is backlit with softer hues. A sense of mystery pervades the scene.

In her artist’s statement, Susan Wahlrab writes, “Beauty is not simple but complex and includes the nitty-gritty of survival that is all of life.” Her approach to that complexity is manifested in watercolors that interweave shimmering layers of color in response to shifting daylight, recalling Claude Monet’s oils. “Reaching Out” is a long, horizontal composition centered on an overgrown apple tree in an untended orchard. The 21-by-54-inch piece is fashioned with pointillist textures that are indeed gritty, like the surface of evenly grained sandpaper. The composition of “Trinity” is closely related to Gottsegen’s “Backwoods III.” Three tree trunks rise in the foreground, while yellow light glows from the painting’s background.

A sun-drenched, red-roofed New England barn is portrayed in “Red Slider” by Craig Mooney. The portrait of rural architecture is a collection of geometric shapes, contrasted by the yellow-green of the meadow in which it’s sited.

Susan Abbott’s work in the exhibition also includes architectonic forms in bright sunlight. Her “Motel on 302” is a 24-inch-square piece composed of nine small canvases. Abbott presents the same locale from different points of view. Trees are simplified into cones and spheres, while the sharp angles of deep-blue shadows create rhythms that bracket softer shapes in the landscape. A driveway, sidewalk and roads bisect the shadows.

Abbott’s “Snow Bound” presages Vermont’s coming cold weather. Five 5-by-5-inch panels depicting hills formed by plowing are heaped over snowbound houses. Purples can be found in the shadows, and the composition contains more subtlety than do Abbott’s stark-lined nonsnowy pieces. A diagonal axis running along the top edge of Abbott’s three left-hand panels seems to “speed up” the movement of the work.

Just as autumn divides summer and winter, so the selections of “Fresh Air” straddle the border between realism and abstraction, and “landscape” is a departure point rather than a destination.