The Vittles Stop BBQ is smokin' - with Vermont flavors 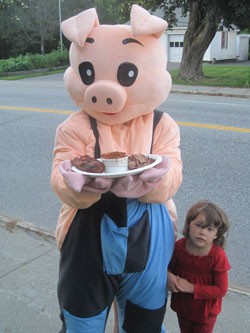 Windsor is best known as the city where the constitution of the Vermont Republic was signed in 1777. Its downtown maintains a certain staid, classic New England feel that would make first governor Thomas Chittenden proud. That is, until BBQ sidles down Main Street.

A 6-foot-tall pink pig in blue overalls can shake things up a bit. The walking advertisement holds a sign printed simply with the words “Union Street BBQ” as she gestures down the road toward her home.

Actually called the Vittles Stop BBQ, the food shack on Union Street matches BBQ’s piggy color palette. The open-sided structure where dinner is prepared has been painted an eye-catching candy pink and blue, as have the umbrella-shaded tables where customers gorge on ribs, chicken and brisket. When Cathy Lohoski added the quirky colors last summer, “the town hinted that there are black and brown pigs, too,” says the chef-owner, who goes by “Granny.” “Now they just shrug. They’ve learned to live with it.”

And they’d better get used to it, because Lohoski’s Barnum-esque aptitude for pork promotion is probably here to stay.

Lohoski and partner Kathy Henderson turned their small plot of land on Union Street into a barbecue pit four summers ago. They get help from the BBQ mascot, known off duty as Henderson’s daughter, Beth, and her own 3- and 4-year-old daughters, Chrystina and Sammy. “They’re pit bosses in training,” says Lohoski of the little girls, who are also charged with holding a hand-painted sign depicting a pig relaxing in a rocking chair while a man smokes on a spit.

Though the business is a fun family affair, it was originally born of desperation, says Lohoski. The 54-year-old trained as a chef at technical high schools in Maryland. She quickly made a career of crafting crab cakes at Chesapeake Bay eateries, then moved on to kosher catering, a hot field in Washington, D.C. Lohoski still gets flustered as she describes the difficulties of coordinating between the rabbi and Secret Service when she catered Israeli peace talks at the White House.

At age 30, an accident left Lohoski in a wheelchair. Cooking in a professional kitchen is tough enough, but with a disability it proved impossible. Lohoski put her culinary dreams on hold and supported herself as a cab driver. A decade ago, she and the Hendersons moved to Vermont, where Lohoski made her living selling flavored nuts, then tried delivering homemade dinners through her still-extant catering company, T.L.C. Vittles.

When those businesses dried up, and Lohoski couldn’t find work at local companies, her inner chef emerged to save the day. “I said, ‘You know what? Windsor needs a barbecue pit.’ It’s a low-cost business that I could afford to start,” she remembers.

She poured her savings into a custom-designed smoker that she could operate from her wheelchair. Henderson was surprised by the idea, but she trusted Lohoski’s business acumen. “I wasn’t not excited,” Henderson admits. “I was just like, ‘Um, OK, if that’s what you want to do…’ But once people started coming in, it was almost like second nature.”

In the first season, Lohoski prepared her meats under a tent. Each year, as business has improved, the Vittles Stop machine has expanded to include more permanent pieces. First rose the building, with its menu painted by Lohoski with pictures of chapeau-sporting drumsticks and sandwiches.

The next year, Lohoski and Henderson enlarged and stabilized the shack, which is open April through October. Despite its somewhat ramshackle appearance, the building is admirably clean: Its last inspection in July resulted in a score of 90 (out of 100) from the Vermont Department of Health — points were deducted for a nonconforming ceiling. A deck is next on the list, and Lohoski hopes to turn the Vittles Stop into a full-service indoor restaurant within a few years.

Besides the usual challenges of entrepreneurship, Lohoski had the hurdle of developing her own cuisine. Though she grew up grinding and smoking kielbasa from scratch with her Polish grandfather on his Pennsylvania farm (something she hopes to start doing at the Vittles Stop next summer), American barbecue was not one of her specialties. And the chef, who calls herself an “artist,” set herself an ambitious goal: She wanted to invent “Vermont-style barbecue.”

Vermont products inspired the Vittles Stop’s uncommon flavors. Lohoski gets basil, elephant garlic and other fresh seasonings from the small garden at the St. Francis of Assisi Rectory across the street from her business. In exchange, she makes casseroles and Polish zucchini pancakes for Father Joe Gosselin, the parish priest.

Apples for the apple butter that flavors the sauce — which comes in three heat levels — are purchased at roadside farm stands. Lohoski uses Vermont maple syrup in many dishes, including the not-too-sweet baked beans. The Vittles Stop gets its corn from a farm stand across the White River in Claremont, N.H.

That corn is something to behold. Lohoski steams it right in the smoker. When a customer requests a cob, she coats one in butter and spices and throws it on the grill, right over the coals, for another dose of smoke. Take a bite and each kernel bursts; no sloppy cobs here. The sweet, almost creamy corn is so tender, it extricates itself with ease.

The same is true of the ribs, which Lohoski treats with TLC for four hours, until meat barely adheres to bone. She warns diners about the “bark” of sweet, caramelized pig flesh, which can be less than fall-apart tender. On a recent visit, however, the precaution is unfounded. The meat is pillowy soft, its smoky taste so heavy it rides the brink of excess.

Most of Lohoski’s meats come to the pink-and-blue picnic tables unsauced. It’s up to diners to dip or drizzle their food with “BBQ,” “hot” or “hell” sauce. Each sauce starts with a fruity base of apple butter, mango and Mandarin oranges. From there, the chef blends in fresh herbs, spices, and jalapeño and habanero peppers. Just not too much of the last two. “People from the north are garlic, salt and pepper people,” Lohoski says authoritatively. “Dill, yeah, sure, but peppers and hots, they’re not right here. A lot of people in Vermont just don’t like the food hot.”

Despite her observations, the Vittles Stop’s pulled pork packs a throat-tickling punch that even spice-shy Vermonters seem to dig. Locally grown horseradish also makes its way into several dishes, including the marinade for brisket.

Lohoski says that brisket, something she had never prepared except to make pastrami as a kosher caterer, is one of the few dishes that has changed since the Vittles Stop opened. “I decided I was going to change it and treat it like a piece of prime rib,” she says. “I use gravity to help with my spices.” As she smokes the marinated meat for 10 to 13 hours, Lohoski’s secret ingredients soak in deep, “with all the nice flavors of Vermont to give it a unique taste.”

The juicy result tastes similar to roast beef but crumbles into tiny chunks, as brisket should. Even during slow times, Lohoski says, each whole brisket sells out within 48 hours. When business is good, it takes only one day.

With her emphasis on Vermont flavors, Lohoski says she wishes she could use local meats, but the cost would be prohibitive. “My objective is to keep the prices as low as we can,” she explains. “Anybody on any budget can eat here. If you’ve got $2, I can give you a hot dog.” For $5, she’ll wrap the dog in bacon, then cover it in pulled pork and melted cheddar, for a Super Vittle Dog.

Lohoski doesn’t limit herself to barbecue, either. Diners can call ahead for her classic Maryland-style crab or shrimp cakes; many Fridays, she cooks lobster. The menu trumpets that Thursday is “globel” night, and it’s not uncommon to see Jamaican pork chops or homemade pierogi on the menu, along with the Polish cucumber salad that’s always available. It’s just as likely, however, to see some less predictable choices. “I consider hillbillies ‘international,’ too,” says Lohoski. “We’ll do ‘hillbilly potatoes’ with brisket and mushrooms, onions and pepper, with Vermont cheddar cheese melted over the top.”

Hillbillies aren’t the only less fortunate folks who get a boost from the Vittles Stop. Lohoski says she donates a portion of the proceeds to the local food bank and sends extra food to the fire department. It’s all part of what the chef describes as repaying the community that has welcomed her.

Henderson, who considers herself the shy one next to extroverted Lohoski, says her role in the business is “taking care of the family.” That means the customers: “Everyone who comes in is basically our family,” she says. And some actually are — one regular diner has become Sammy and Chrystina’s godmother. As word spreads, Lohoski and Henderson will no doubt see their hungry family expand each year.