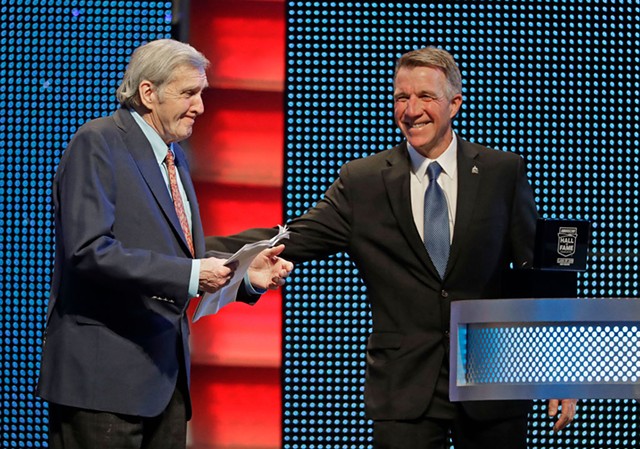 "It was an incredible honor to be a small part in recognizing his contributions to the sport," said Scott. "Putting him in the Hall of Fame was well deserved and overdue."

Squier, the first broadcaster enshrined in the hall, is credited with dubbing the Daytona 500 "The Great American Race" and helped develop the in-car cameras still used in race coverage. Squier spent decades calling races on radio and television, and he co-owned Thunder Road SpeedBowl in Barre until he sold the track last year.

The call to the hall, though, was "the cat's meow," a tickled Squier said Monday. And it was Squier, a Waterbury native, who arranged for Scott to be there. He told NASCAR officials that Vermont has the only governor who races — one who even won a race last summer.

"I told them I've known him since he was a child, [racing is] his sport, and he's willing to stand up for it," Squier said. "They thought that was a heck of an idea, so away we went."

Dale Earnhardt Jr., one of the sport's most famous racers, introduced Squier before Scott officially inducted him by slipping a diamond ring on his finger.

"In our sport, there are innovators, builders, advocates, challengers, heroes, and an announcer now and then, who all have a part to play," Squier said in his acceptance speech. "Some of us are inconceivably lucky to call these folks friends. I think we all call them heroes. And I'm feeling like an odd duck in a flock of fancy geese, let me tell you."