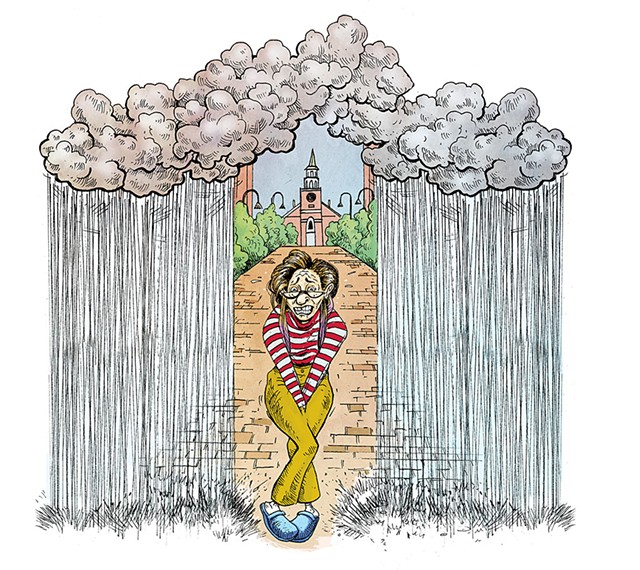 When you gotta go, you gotta go. But if it's in Burlington, you'll need luck and a good sense of direction.

In the days of yore, the Burlington Town Center provided a safe haven for tourists and transients alike to empty their bladders until 9 p.m. most nights. But the mall is now a hole in the ground, and public pit stops are harder to come by.

Burlington City Hall bathrooms are open during business hours. Ditto those at Starbucks, which changed its customer-only policy a year ago after two black men were denied bathroom access, then arrested, at one of the company's Philadelphia stores.

The Queen City's downtown transit center and Fletcher Free Library require users to hand over collateral such as an ID before they can pee. Way down on the waterfront, there are facilities at the ECHO Leahy Center for Lake Champlain and the Community Boathouse. But the latter, along with park bathrooms, are only open seasonally.

The potty problem is so prevalent in Burlington that Andrew Jo, a standup comic now based in New Mexico, dedicated a blog to it that lives on. The aptly named www.ineedtopeeinburlington.com lists the best places to go. (For those keeping score, City Market, Onion River Co-op's downtown store earned a 4 out of 10; Market32, on Shelburne Road, notched a perfect 10.)

Sprinkled in with the satire is real talk: "I hope Burlington can offer public restrooms with accessibility anytime to anyone, especially without assuming everyone is shooting up, using a portable microwave to cook crack, or do something spooky," writes Jo, "because some people actually do need to pee in Burlington."

City Councilor Adam Roof (I-Ward 8) agrees. He cosponsored a resolution last month that urges the mayor to expand public restroom access, because the shortage burdens small businesses that often answer the call. When they don't, or can't, the lack of loos leads to public urination and defecation.

Officials took note of that problem in 2017 after a steady stream of incidents involving the downtown homeless population. In response, the city council last spring beefed up an ordinance to police such "quality-of-life" infractions. The ordinance has yet to be enforced, but Burlington Police Deputy Chief Jon Murad said cops will have "a much more pronounced presence" as the weather warms.

"We criminalize something that we're almost facilitating," he said. "We're going to be in a situation where, unless we do something for this summer, [we'll have] a lot of disappointed people."

Meanwhile, Mayor Miro Weinberger hasn't committed to increasing allocations for bathrooms in the fiscal year 2020 budget, which the council will vote on next month.

"I agree with the sentiment we should be expanding these public facilities, and we've been actively doing that for some time now," Weinberger said. "There are a variety of temporary facilities under consideration."

He didn't identify any current downtown public bathroom hubs but instead touted toilets that could open by a date uncertain at CityPlace Burlington, Memorial Auditorium, the Moran plant and City Hall Park. Roof's resolution acknowledges these projects but also pressures the administration to consider short-term solutions such as temporary units in high-traffic areas.

The decree describes a mobile facility designed by the program Dignity on Wheels that provides toilets, as well as showers and laundry machines. The resolution notes that the units are available for $1,500 per week with a $300 monthly cleaning fee.

As part of a 2016 study and pilot program, Denver officials installed a trailer of portable potties, staffed by an attendant 12 hours a day, in its busy downtown. Businesses there had been overwhelmed by public requests for the facilities; people would bathe, use drugs and generally create biohazardous messes that workers weren't qualified — or paid enough — to clean up.

Burlington merchants share similar concerns. Rebeca Totu, a sales associate at Stella Mae boutique on Church Street, said the store allowed patrons and non-patrons to use the bathroom until the toilet got clogged with un-flushable items too many times, leading to expensive repairs. She mentioned concerns about drug use as well.

"Unless it's an absolute emergency, we're like, sure, but other than that, no," Totu said.

Honey Road restaurant initially took the same tack but now permits anyone who asks — unless they're drunk and disorderly, said Kayla Silver, a server at the dinner spot at Church and Main streets. Most times, it's kids and older folks "who aren't making it one more block," she said.

"Who do you say yes to, and who do you say no to?" Silver said. "The reality is, it's a bathroom. They should get to use it, too. I don't think any of us here would call this a burden."

One Yelp user publicly lambasted Crow Bookshop, an independent bookseller on upper Church Street, after an employee wouldn't let a 5-year-old girl "doing the pee-pee dance" use its restroom back in 2017.

"I get you don't want the general public traipsing in and out of your bathroom, but use some common sense when it comes to making exceptions," she wrote. A store next door accommodated the girl, she added.

Crow owner Keith Terwillegar said the shop's insurance policy prohibits the public from accessing its broom-closet-size washroom. He said the Yelp user's outburst was precipitated by the larger issue that there's nowhere for businesses to send customers in need.

"I don't think it's complete negligence," Terwillegar said of the city's lacking infrastructure. "I think it's a complicated issue."

He suggested Burlington invest in enclosed, self-cleaning bathrooms like those in Paris, which are known as Sanisettes.

"Let's get one of those," Terwillegar said. "You could put a whole bunch of them with solar panels on top where the mall used to be."

Weinberger said the city is negotiating with businesses to open their bathroom doors, a proposal to "creatively" address the problem without spending taxpayer money. But Kelly Devine, executive director of the Burlington Business Association, said the mayor is unlikely to find much support.

"That's not a solution," she said. "That's patchwork."

Devine wrote a letter to the council supporting Roof's bathroom initiative. She said many retailers simply don't have accessible bathrooms or enough staff to watch the cash drawer while another employee escorts a patron out back.

And, "given the state of the current opioid epidemic," she said, "you can't do it without having a sharps container."

Arthur Medeiros, a homeless man hanging out in City Hall Park last week, said people who "shoot dope" and do things "they shouldn't be doing" poison the public against building more restrooms, which he said are sorely needed.

"Everybody's got a right to go to the bathroom. That's a God-given right," Medeiros said. "I don't like going outdoors. I do if I have to, but I try not to."

Asked what undomiciled folks do when they've gotta go, Medeiros and his park bench companions pointed to the granite steps behind City Hall.

"Infested with piss," Medeiros said. "They ain't got nowhere to go."

Kelly, a homeless woman who only shared her first name, said she has no trouble finding a bathroom downtown. Muddy Waters, Mirabelles Café & Bakery, Red Onion Café and City Hall are her go-to spots during the day; she stays with a relative at night.

"A lot of women just go in an alley and squat," Kelly said while panhandling on Church Street near City Hall. "I've done it myself a couple of times. Not down here, but I mean, I'm sure a lot of them do."

Burlington Police Chief Brandon del Pozo said that just last week a citizen sent him a viral photo of a woman, pants around her ankles, taking a wee against a tree in broad daylight on Church Street. He said most people don't call 911 on public urinators, so the department only gets a couple dozen such complaints each year.

Updated last May, the "quality-of-life" ordinance says anyone who goes No. 1 or No. 2 in public three times within six months can be charged criminally and fined $100, both of which can be waived if the person completes a restorative justice program.

But del Pozo admits that ticketing isn't the most effective means to the desired end. More public restrooms would certainly help, he said.

"It's an urgent quality-of-life matter, but it's not an urgent public safety matter," he said.

But it is unsanitary and discomfiting. Stephen Marshall, a former homeless man turned community activist, said he's seen human feces on a church lawn and heard about two homeless men who urinated in public — one at the library and the other at a downtown restaurant — to protest Burlington's lack of bathrooms.

"Is that the best possible thing to do?" Marshall said, shrugging. "It got attention."

He suggested it's not difficult to decide where to build facilities: "Where are there no bathrooms? That's where you need a bathroom."

Marshall said Burlington would be more inviting if it had additional public restrooms. Devine, the business association director, agreed. Families and festivalgoers come back if their visits downtown are comfortable, she said.

"We're in favor of working together as a community to solve a community problem," Devine said.

Mayor Weinberger said the city has to consider public safety, maintenance and staffing, all "nontrivial" costs, as it ponders building more pots to piss in. Councilor Roof said that context is important, if not frustrating, "for people who say, 'Hey, look, just open a damn bathroom.'"

Deputy Chief Murad was skeptical. He's not convinced public restrooms in downtown Burlington would get used.

But they did in Denver. The pilot program was so successful in its "dignified, humanitarian approach," the study recommended opening permanent potties for the public. And, contrary to expectations, the homeless were not the most frequent users.

"It's a demand we all have," Roof said. "We should be looking at how we can have a world-class facility that's open 24/7 — or damn near close to it."