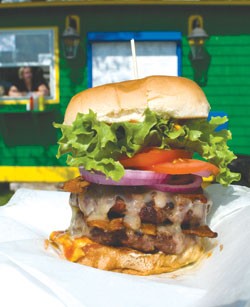 Since Seven Days reported last week on a Friday-night food-truck powwow coming to Burlington’s South End, Felix Wai — half of ArtsRiot, the event’s organizers — says he’s received “lots of calls from people starting up food trucks who asked, ‘Hey, can we park there?’”

Not quite yet. The South End Food TruckStop is due to open in two weeks and is already at full capacity — at least for now, Wai says. But the discovery that Burlington is bursting at the seams with food trucks is a welcome one. “Sometimes you can get some really creative food from trucks that you can’t get in restaurants,” says PJ McHenry, Wai’s partner. “It’s invention by necessity.”

Every Friday evening from 4:30 to 9 p.m., beginning on May 24, the parking lot behind Speeder & Earl’s Coffee Roastery will morph into a bazaar of trucks and carts peddling barbecue, tacos, ice cream, fresh juices, beer and even maté. Nine vendors have signed on so far: Expect tacos from Muchacho Taco; burgers from the Burger Barn; ethnic street food from ¡Duino! (Duende); creative sandwiches from the Hindquarter; barbecue from Southern Smoke Foods; fresh juices from Tomgirl Juice Co.; maté from Mocean Maté; ice cream from Lake Champlain Chocolates; and beer from Fiddlehead Brewing Company, one of the event’s sponsors.

Roving chef Brian Stefan of Southern Smoke plans to serve up Cajun and Caribbean-inspired foods such as smoked-pork sandwiches; empanadas stuffed with crab or smoked chicken; savory lobster, ham or chorizo beignets; and — depending on availability — small plates such as fried dandelion heads. “I’m going to tap my farm friends to see what I can get,” says Stefan.

Even the resident brewer is going to get creative. “We’re talking to Matt [Cohen, Fiddlehead’s owner] about a special South End summer beer,” Wai says, and adds that patrons will be able to roam the entire space with a beer in hand (rather than have to retreat behind a cordon).

The trucks will most likely form a ring that “hugs the buildings,” McHenry says. That includes the studio of AO Glass, which will stay open late each Friday for glass-blowing demonstrations. Wai hopes other nearby galleries will eventually follow suit.

ArtsRiot will put out picnic tables and provide bathroom access and live music every week. Steve Madden’s Pine Street Irregulars are slated to play at the inaugural event, and music collective Jenke Arts will play a succession of Fridays.

The part Wai and McHenry are most excited about is donating a portion of each week’s proceeds to the Chittenden Emergency Food Shelf. “It’s a pretty incredible place,” says Wai.

In the meantime, the ArtsRiot duo is busy renovating the front of the former Fresh Market space. For more on that, see Crumbs in Wednesday's issue of Seven Days.