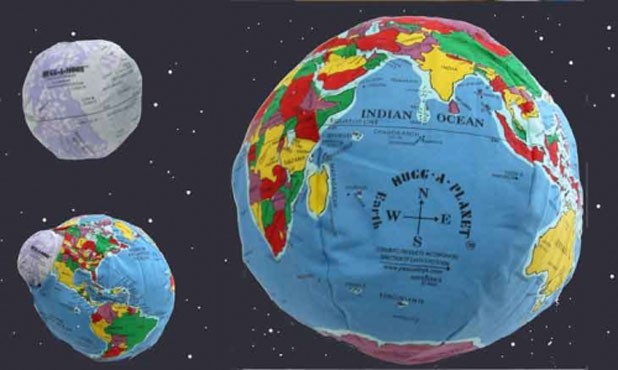 Can a cuddly little planet from Vermont help bring a little peace to Earth?

We’ll find out after September 11, the day Japan launches a cargo shuttle bringing equipment and supplies to the International Space Station. That cargo includes a soft, round Earth, along with Moon and Mars pillows, made by Hugg-A-Planet of Essex Junction.

The International Space Station, a huge, inhabited satellite orbiting the Earth, is a scientific and educational laboratory for the United States, Japan, Canada, Russia and European countries. It provides a facility for observing the Earth and stars and conducting research. As the first space project to have the participation of so many nations, it’s become a symbol of international cooperation and world peace.

Hugg-A-Planet Earth is a stuffed fabric globe with labels identifying 600 places, including countries, bodies of water and islands that are drawn to scale and color-coded. According to Hugg-A-Planet president Robert Forenza, the American astronauts will tuck a gyroscope inside the Earth pillow to make it spin in the weightlessness of space. They reportedly will capture images of the rotating cushion to create educational demonstrations, which in turn will be beamed to viewers on the real planet Earth via satellite, and online on NASA TV. Students in classrooms all over the world will have an opportunity to see the Vermont-made globe in space and use it to learn about our planet’s place in the cosmos.

That’s the basic idea behind Hugg-A-Planet, says Forenza, a South Hero resident and 1977 University of Vermont graduate who created the product 27 years ago with his sisters, Patricia and Lorraine. “If we want real peace, we have to start with the children,” Forenza says, paraphrasing Indian spiritual leader Mahatma Gandhi. “I’m looking to get kids interested in geography and the world.”

Hugg-A-Planet Earth is more versatile than a traditional hard globe, says Justin Brown, a special educator for grades 6 through 12 at Bellows Free Academy in Fairfax. He uses the squishy Earth to teach in various settings.

“It provides a great visual for kids who are kinesthetic learners,” Brown says, referring to students who learn best through physical activity. “I use it for classroom activities and games. At the beginning of the year, I use it for ‘getting to know you’ [activities], for students to show places they have visited or where their families are from. It gives people information about one another’s history.”

Brown also uses Hugg-A-Planets to prepare students for international trips he coordinates to Guatemala, Paris and Belize. “It gives them perspective on the home-site families,” he says. “I show it to them and say, ‘This is our entire world. Here is where you are, this teeny speck, and here’s where the rest of the people are.’” He brings the cushy globes — which come in various sizes — along on the trips to present to local residents. “It’s nice to give as a gift and also to show people where we came from and where we are going,” Brown says.

Brown keeps a Hugg-A-Planet at home for his daughter. At a year old, “She’s not quite old enough to talk about the continents and capitals yet, but we’re getting there,” he says.

While a traditional globe sits on a shelf and is easily forgotten, the Hugg-A-Planet can be tossed on a bed, sofa or dorm-room floor, where it can be leaned against, sat on and referenced faster than you can say, “Google Earth.”

“With Hugg-A-Planet, you can immediately start teaching kids about the world and our place in the universe,” claims Forenza, a father of three. “You can show a 2-year-old a place on the planet, take it away and give it back and say, ‘Show me where is Asia,’ or ‘Where does Grandma live?’ and they will find it. As they grow older, you can do more … If something is on the news, you can grab the Hugg-A-Planet and talk about it. It makes children grow up more aware of the world.”

Since 1984, more than a million Hugg-A-Planet Earths have sold worldwide, netting the company about a half-million dollars a year, Forenza says. They can be found at toy stores, bookstores and museum gift shops, as well as at www.peacetoys.com.

Putting savvy marketing behind his educational outreach, Forenza tries to get Hugg-A-Planets into celebrities’ hands. He sent them to First Daughters Sasha and Malia Obama just before the presidential inauguration. He shared them with musicians at last month’s Woodstock 40th-anniversary party in Bethel Woods, N.Y. Next month, at a Vigil for Peace event in New York’s Central Park, Hugg-A-Planets will be onstage and passed around the crowd, Forenza says.

Once in the space station, the pillow Earth will make a circuit of planet Earth every 90 minutes for as long as the station remains active — until 2016, Forenza explains. That should give young Earthlings plenty of time for “pillow talk.”

“The one thing all of humanity has in common is our planet,” says Forenza. “If we get a generation of people hugging the world, maybe they’ll take better care of it.”