Phelan O'Connor, co-owner of Pigasus Meats in South Hero, was raised vegetarian. He never thought much about his diet until he started working on the school farm while studying at Warren Wilson College in North Carolina. Tending beef cattle there, O'Connor saw firsthand how animals can interact with the land in both positive and negative ways.

"Every little change you make — where you put a group of animals, what you feed them, how you move them — can make a big impact," O'Connor said.

“Fired Up” is a semi-regular series explores how Vermonters are responding to the climate crisis..

During college, O'Connor, now 31, also learned that all forms of agricultural food production impact the Earth. From an environmental perspective, he explained, a veggie burger made from a monocrop of soybeans is not inherently better than a hamburger from a well-managed, grass-based livestock operation. Even wild sources of food, such as game, change the natural environment. "White-tailed deer have impact, too," he said.

In recent years, agriculture has captured headlines both for its contributions to the climate crisis and for its vulnerability to increased extreme weather. O'Connor and his wife, Kelsey, 33, are among those who believe that both issues can be addressed by livestock farming that prioritizes investment in the soil.

The couple maintain that how they farm pigs and chickens provides a good life for the animals, produces nutritious food and "cares for the biggest thing: the planet itself," Phelan O'Connor said. "We're trying to put the soil first. One way we do that is with our animals."

Pigasus is one of 11 farms in the inaugural cohort of the Northeast Organic Farming Association of Vermont's statewide Jack Lazor Memorial Soil Health Stewards program. It ran from April through October of this year and helped farmers expand their knowledge of soil fertility and pasture management.

The O'Connors and a small crew are raising 330 pigs and managing 1,600 laying hens on the 170-acre conserved farm they bought in 2017. Their popular stand at the summer Burlington Farmers Market often has a long line for breakfast sandwiches made with the farm's eggs and sausage. The flock produces about 44,000 dozen eggs annually, which are also sold to restaurants and at retail stores throughout northwestern Vermont. The farm's pork — from whole hogs to sausages — goes to local restaurants, a few farmstands and specialty markets. 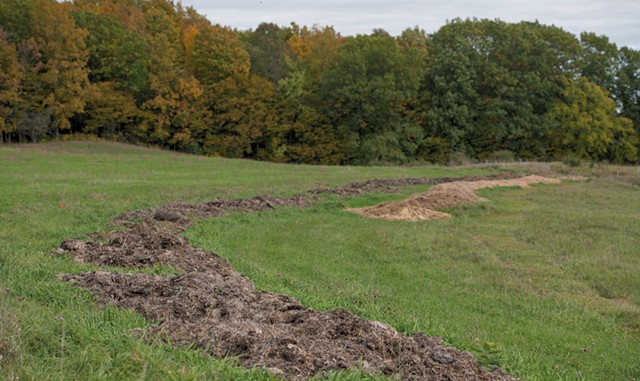 During the pandemic, the farm's email list leapt from 60 to 300 names, with a comparable rise in sales.

On a recent Monday morning, Phelan O'Connor stood in a 2.5-acre paddock that contained 59 pigs. The animals rooted, nibbled on grass and investigated a trio of visitors. "We raise a lot of curious animals," he said.

The pigs and chickens spend about half the year outside, moving from paddock to paddock on 65 acres of pasture. In this carefully managed rotational grazing, nutrients from the animals' waste improve soil health, and animal activity stimulates plant growth below the soil's surface. The chickens enter each paddock after the pigs have left, scratching through the manure for insect larvae and trampling down the vegetation, which creates "armor for the soil," O'Connor explained.

He described his pigs as "mutts," a mix of heritage breeds that do well on pasture, including Yorkshire, Duroc, Tamworth, Berkshire and Gloucestershire Old Spot. Jeremy Wood, chef de cuisine at Dedalus Stowe Wine Bar, buys whole hogs from Pigasus and uses 100 percent of each animal in his dishes, such as grilled bone-in pork chops with mustard sauce and pig's head roulade with candied hazelnuts and tangerine. The fact that the pigs are raised humanely on pasture aligns with Wood's ethical sourcing goals. It also "results in some of the most tender, flavorful pork I've ever had," he said.

Pigasus is the only farm in this year's Soil Health Stewards cohort that is not raising cows, sheep or goats. Unlike those ruminants, pigs and chickens cannot thrive solely on grass, but O'Connor said that well-managed pasture can satisfy more of his pigs' dietary needs than generally thought. "We're shooting for 20 to 30 percent of their nutrition [coming] from improved forages," he explained.

O'Connor said he has appreciated the information and connections to other Vermont farmers he gained through the Soil Health Stewards program. "There's always more to learn," he noted.

Neither O'Connor nor his wife, natives of Virginia and western Massachusetts, respectively, came from farming backgrounds. But they were drawn to the work at Warren Wilson, where they met. They moved to Vermont in 2013 and incubated their new business at Stony Pond Farm in Fairfield before buying their South Hero farm. Kelsey also works in Burlington as a pediatric nurse, and the couple have a 7-month-old son.

Phelan O'Connor has a tattoo of red clover, the Vermont state flower, on his right arm. "People say, 'You must really love Vermont,'" he said with a chuckle. "But I didn't even know I was going to move here when I got the tattoo in college." He decided on clover, he said, because it's good for pollinators, offers strong nutrition to grazing animals and fixes beneficial nitrogen in the soil, making it accessible to plants and animals.

When the O'Connors bought their farm, they faced a lot of work to improve the soil's health. Many of the fields had been hayed for years without much investment in the soil. It takes time to build up fertility that supports nutritious forage, and rotational grazing is a labor-intensive method.

In early spring, the pigs are moved as often as three to four times a day to protect fragile, wet soil and to make sure they don't overgraze emerging plants. In the summer and fall, the timing of animal rotations depends on how the grass is growing but averages about every 12 to 24 hours. Most of the moves involve guiding the pigs to an adjacent fresh paddock by using temporary electric fencing as a cordon. With practice, the team got it down. "We can move 60 pigs in about five minutes," O'Connor said.

Although it might seem counterintuitive that the act of grazing can help build soil health, he explained how nipping the foliage tips prevents seed heads from developing and stimulates plants to send out deeper roots. That, in turn, pulls more carbon into the soil, builds soil structure and helps plants better tolerate dry periods.

The rests between animal rotations are also key to optimal pasture health, O'Connor explained. During the fast-growing spring, a paddock might need only 25 to 35 days to recover from grazing. In the height of summer, it might need 90 days. "Managing soil is really managing rest periods," O'Connor said.

The Pigasus team is also actively improving pasture plant variety and quality. In August, they seeded radish, grazing brassicas, alfalfa, clovers and chicory over 12 acres. Pigs are natural rooters, and when forage quality is low, they will root rather than graze, which can disturb the soil more than is ideal. "It's not the easiest path — to pasture pigs," O'Connor said.

To build the soil, manage water flow and nourish the plants, the farmers are experimenting by adding composted winter animal bedding to three fields in the form of windrows.

Above the pig paddock, O'Connor walked over to the long curved windrow, which looked like a giant brown caterpillar making its way across the pasture's lower slope. He pulled off a handful of plants from below the windrow where growth was markedly lusher than above. "This is all great pig forage and good for pollinators, too," he said, pointing out red and white clover, bed straw, meadow grass, plantain, and dandelion. "I'm stoked about these dandelion leaves."

The windrows also help disperse and absorb precipitation heading down the hillside, O'Connor explained. As the flow hits the windrow, "the water picks up nutrients and fertilizes the land. We try to keep the water on the farm," he said. "This is how we can have the most impact in our community, on the landscape, even [on] the lake." 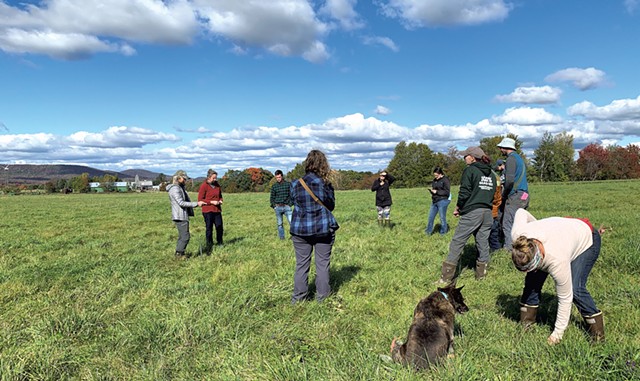 Program funding of $15,000 was initiated by a $5,000 gift in Jack Lazor's honor from Stonyfield Organic, with matching funds provided by the Lazor family and Organic Valley.

Stonyfield Organic cofounder Gary Hirshberg knew and admired Jack Lazor from the early years of the organized organic farming movement in the late 1970s. "We were from the same tribe," Hirshberg said. "Jack was a shining example of what it takes to be successful as a small, organic farm business."

Hirshberg's understanding of "the critical importance of soil health for ecological stability" also goes back that far, he said. "It's now too late to stop climate change. The key here is adaptation and mitigation," he continued. "The only way that we're going to do that is to take carbon out of the atmosphere — the carbon that we've already put in and that will continue to go into the atmosphere for decades to come — and put it back into our earth. The best way to do that is soil carbon sequestration, and that's what organic agriculture does every day."

Butterworks Farm cofounder Anne Lazor proposed the idea behind the Soil Health Stewards program after NOFA-VT approached her for input on how to use Stonyfield's gift. Her husband, who died last November, was passionate about building and protecting soil, she said.

When Jack was alive, they rarely took a fourth cut of hay, Anne recalled. "We would just leave [this] beautiful crop of hay. All the other farmers shaved their fields ... They didn't understand. They'd offer to cut it for us and we'd say, 'No, we're leaving that for the soil.'"

In that spirit, Anne said, she asked NOFA-VT to develop a program "that could really inspire farmers to pay attention to what's under their feet, under their crops and under their animals' feet."