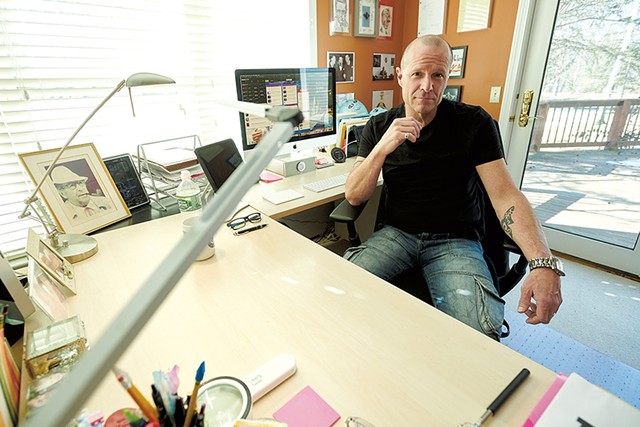 It's hard to find things to do with Pierre Simenon in Vermont. A former entertainment attorney and the son of a French literary lion, Simenon moved to Shelburne six years ago with his wife and two children from Malibu, Calif., where he also worked for a time as a diving instructor.

He loves great white sharks, which he believes are gravely misunderstood; in his wilder days, he went diving off the coast of Australia's Neptune Islands, baiting them with fish guts. His preferred suit is neoprene, his ideal climate plus or minus one standard deviation from paradise. As we emailed back and forth about our upcoming interview, it became clear that there would be no practical way for me to observe him in his element.

Simenon grew up skiing in the Alps, where the temperature rarely dips into the range that turns your blood into red Slurpee, a luxury that ruined him for New England slopes. He doesn't dive in Lake Champlain, because the water is too murky to see more than a few inches in front of you, not to mention the foot-thick layer of ice in the way this time of year.

A visit to the ECHO Leahy Center for Lake Champlain seemed like a good idea until the reality of conducting an interview over the shrieks of elementary schoolers set in. I agreed to meet Simenon at his house, then asked, somewhat despairingly, how he felt about puzzles. A few hours later, he wrote back: "If by puzzles you mean the board games with little cardboard pieces that fit together, I have absolutely no patience for them."

That's how we ended up drinking coffee at the kitchen table of his light-filled Shelburne home. Simenon wore a gray long-sleeve Under Armour shirt and the kind of fashion-conscious patchwork jeans that would look ridiculous on anyone except a 60-year-old European man with chiseled good looks, which is precisely what he is. He seemed a bit disoriented in this cul-de-sac of Priuses and coiffed hedgerows, like a big-game hunter who fell asleep on safari and woke up in the stuffed-animal section of a toy store. 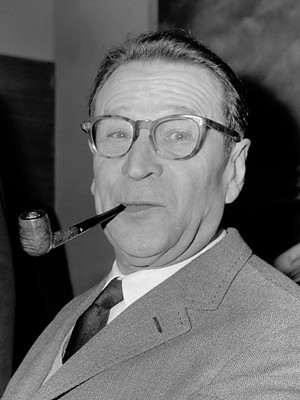 Pierre Simenon is the youngest child of Georges Simenon, who wrote more than 400 novels that have been translated into 55 languages and made into 53 films. The elder Simenon was one of the highest-earning writers of the mid-20th century, a larger-than-life literatus who palled around with Charlie Chaplin and Federico Fellini.

His profligacy wasn't limited to his literary output; in an interview with Fellini, Simenon famously boasted that he had slept with 10,000 women. Upon hearing this estimate, his second wife — Pierre's mother, Denyse Ouimet — reportedly countered that the number was probably closer to 1,200. Besides Pierre, Simenon had three children: Marc, a director and screenwriter who passed away in 1999; John, now the CEO of Georges Simenon Ltd, which holds the rights to their father's work; and Marie-Jo, who committed suicide in 1978 at the age of 25.

Georges Simenon is perhaps best known as the creator of Inspector Jules Maigret, a festively rotund detective who, like Simenon himself, enjoyed his pipe — though Maigret's carnal appetites are less voracious than his author's. The Maigret series, which spans 75 novels, became a television show in the early 1960s that was revived from 1991 to 2005. Two recent adaptations, the 2016 made-for-TV movies Maigret Sets a Trap and Maigret's Dead Man, featured Rowan Atkinson as the title character.

For the past two years, Pierre Simenon has been involved in screening Panique, a 1947 film based on one of his father's novels — first at the Film Forum in Manhattan, then at the TCM Classic Film Festival in Los Angeles. This March, Panique came to the Shelburne Museum after Simenon approached museum director Thomas Denenberg, whose children attend the same school as his.

Simenon and his family moved to the area in 2013, after his wife, Adeline, a business immigration attorney, accepted a job with Paul Frank + Collins in Burlington. Since then, Simenon, who stopped practicing law in 1996, has dedicated himself to writing novels and raising his two kids, 13-year-old Liam and 8-year-old Liv. He usually writes while they're at school, then picks them up in the afternoon and spends the rest of the day with them.

"When my dad was writing, he'd finish an entire novel in seven to 10 days, and he'd lose a few pounds of sweat from the effort," said Simenon. "When he was working, there was a 'Do Not Disturb' sign on his door, and we knew not to bother him unless we were bleeding to death. But he wrote maybe five or six books a year, so the rest of the time, he was totally available. And even when he was working, he ate all his meals with us. I've been really lucky to be able to do that with my own kids."

So far, Simenon, who was born in Lausanne, Switzerland, has written three novels in his native French. Published widely in Europe, his books aren't currently available in English translation. But his life in Vermont has seeped into his work: His latest thriller, L'enfant du Garland Road (The Child From Garland Road), which will be released in Europe and Canada on April 4, takes place in a lightly fictionalized Chittenden County.

The story centers on a widower named Kevin O'Hagan who drifts to Vermont, rudderless and depressed, after his daughter turns 18. As the reader learns through flashbacks, O'Hagan carries a lot of psychological baggage from his marriage to his deceased wife, who gave him permission to quit his job and pursue his dreams of being a writer. The writing didn't really materialize, and O'Hagan became a sort of kept man. He develops a nightly habit of putting a gun in his mouth and contemplating suicide.

When a twist of fate forces him to assume guardianship of his young nephew, O'Hagan resumes the role of caregiver and shelves his death wish. But the child gets abducted, and O'Hagan enlists the help of a childhood friend, a retired Addison County sheriff who happens to be a very butch lesbian, to save him. (Dattilio's Discount Guns, Tackle & Archery, the gas station/gun shop on Shelburne Road in South Burlington, has a cameo in their rescue mission.)

As tempting as it is to read Simenon — or any writer — through the lens of autobiography, Simenon said the overlap between his novels and his real life isn't a reliable decoder ring.

"If you do your job right, the parts that seem autobiographical are completely made up, and vice versa," he said. "People always ask me, 'Is that me in your novel?' No, maybe you're just the head, but the body is made up of a bunch of different people. My wife will read my novels, and sometimes, when there's a wife, she'll go, 'How could you say those things about me?' Honey, I was married twice before."

Since he began writing thrillers, Simenon has grown weary of the comparisons to his father, along with the inevitable questions about influence. When I turned our conversation in this direction, he rubbed his temples vigorously.

"I want to say my dad has zero influence on me as a writer. It's like comparing a bicycle to a Ferrari: They both have wheels, but the similarities end there," said Simenon. "If there's anything I take from him, it's the idea he instilled in us that we should always remember where we came from. He reminded us that even though we were born into means, those can all disappear in an instant, which is true.

"My dad came from la petite bourgeoisie, which, in French, has a really beautiful meaning: ordinary folk," Simenon continued. "He taught us to respect all people, and he respected us. But his respect came with the knowledge that I could lose that trust if I did something stupid, which I think is the best way to raise children."

Simenon's father was exceptionally understanding on at least one subject: sex. He told his son to conduct intimate business in his own room, never in the backseat of a car or some other clandestine place. His one request, said Simenon, was not to wake him up.

When Simenon was 15, he recalled, he brought a girl home one night. They got in his bed and fooled around, but ultimately fell asleep with their virginities intact. The next morning, the nanny nudged open the door to Simenon's bedroom to find them entwined in the sheets. Scandalized, she marched to Simenon's father's office, where she found him reading the newspaper in his armchair.

"There's a girl in Pierre's bed!" she exclaimed. "What should I do?"

Gently, Georges Simenon lowered his paper. "Well, when they wake up," he said, smiling, "would you be kind enough to ask this girl what she wants for breakfast?" Then he went back to reading. (Six months later, the young Simenon would lose his virginity to a 20-year-old Parisian, who took him up to her apartment after a screening of Soylent Green.)

A few decades later, while diving with friends off the coast of southern France, Simenon might have drowned if it weren't for sex. When he reached the wreck of a cement barge, about 150 feet below the surface, his vest refused to inflate to the point of zero buoyancy, leaving him to struggle against the resistance of the 24-pound weights strapped to his body as his air supply dwindled.

Simenon had lost track of his friends, who never worried about his safety in the water — he was an experienced diver, with an instructor's certificate. Increasingly desperate, he tried to kick himself up a few feet, but he couldn't overcome the pressure. His anxiety spiraled into panic.

Then Simenon remembered something a diving instructor had taught him: Before you can see your way out of a crisis, you have to get your mind into a good place.

"When you're in that moment, you have to think about something you really like," Simenon said. "For some people, it's cheesecake; for others, it's their kids."

As soon as Simenon started thinking about sex, his mind cleared, and he found the strength to push himself toward the surface.