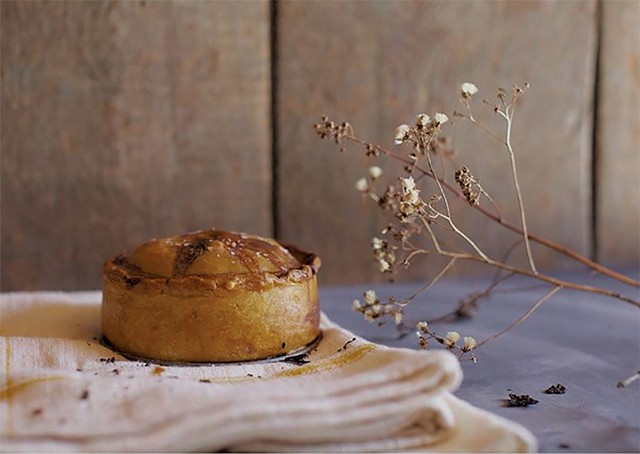 White River Junction has seen no shortage of new developments in recent years. And this Tuesday, October 11, the town gained a new restaurant when Piecemeal Pies opened in the old J.J. Newberry department store at 5 South Main Street.

The shop offers savory pies and salads built on meats and produce from local farms. Once its liquor license goes through, it will also feature an array of Vermont ciders and beers — one of them from nearby River Roost Brewery. "We have such amazing orchards and cider being made here," chef-owner Justin Barrett tells Seven Days.

Piecemeal, he says, was inspired by the casual afternoon meals of meat pies and ciders that he experienced on a research trip to England in 2013. Even before that trip, Barrett was no stranger to British cookery. In New York, the chef worked at April Bloomfield's the Spotted Pig, which is widely credited with introducing America to the English gastropub.

He then teamed with Ben Towill and Phil Winser to design and open the Fat Radish. In 2013, after a Vermont stint, Barrett opened Salt Water Farm Café & Market with Annemarie Ahearn in Rockport, Maine, before returning to the Green Mountains.

In White River Junction, Barrett's opening menu includes deep-dish pies filled with pork and parsnip, rabbit and bacon, celery root and roasted garlic, and spinach and feta, among other combinations. There are also salads, such as one made with cauliflower, radicchio, raisins and pine nuts; and — while the corn lasts — a sweet soup loaded with corn picked the same day.

These offerings can be eaten in-house or brought home, as can the sweets, which include plum upside-down cake, oatmeal-currant cookies, and pies that hold blueberry and rhubarb or peaches and cream.

Piecemeal is now open for lunch and early dinner Tuesdays through Saturdays, with brunch service possible later this fall or winter, Barrett says.