Piecemeal Pies Expands to Stowe with Scores of Investors

About a month after the owners of Piecemeal Pies in White River Junction announced their plan to open a location in Stowe, restaurants in Vermont were ordered to close to control the spread of the coronavirus.

The timing could hardly have been more precarious for Piecemeal Pie's plan. Business dropped by about 75 percent when the Upper Valley restaurant reopened later last spring, according to co-owner/chef Justin Barrett. (It would pick up considerably when warm weather allowed for outdoor seating.)

"This was the year I was actually going to be able to pay myself," Barrett, 38, said of 2020. He owns the restaurant with Josh Brown, 35, who is also his life partner.

But financing was perhaps the most problematic element of the expansion in the year of the pandemic. Though no loan documents had been signed, banks lost interest in financing the Stowe branch, Barrett said. This scenario was typical in 2020, according to banker Justin Bourgeois, who specializes in financing food and beverage businesses.

"Restaurant financing since the pandemic has been a challenge, if nonexistent," Bourgeois, regional vice president at Community National Bank, wrote in a text. "But with the opening of the economy, we should see more opportunities for financing with traditional lenders."

"The only way to really be successful in the restaurant industry is to reduce as many variables as possible." Justin Barrett tweet this

For Piecemeal Pies, the money solution came via a crowdsourcing platform called Mainvest. The Massachusetts-based firm facilitates investment opportunities in small businesses. It helps connect investors with local businesses, manages the filings with the U.S. Securities and Exchange Commission, and handles the quarterly payments to investors, according to Kaylin Kulza, a Mainvest business success manager. People can invest as little as $100.

With a focus on Main Street investing, the company has helped to fund 94 businesses. It currently has 42 active offerings on its platform, including Piecemeal Pies. Through March 28, 78 people had invested a total of $83,600 in the business.

A bakery, bar and restaurant that specializes in savory pies, Piecemeal Pies is the first Vermont business to work with Mainvest. The investment platform was interested in it for numerous reasons, according to Kulza.

"They're very community focused," she said. "They use local ingredients and [purchase from] local farmers. I think they kind of represent Vermont."

The money will help Piecemeal Pies fund a major renovation project in Stowe. The red clapboard building on Main Street, which is set back from the street, is built into a hillside. The lower level will be the site of a new kitchen. Connected by a staircase to the upper dining area, the kitchen will be built in a former barbershop that vacated the building during the pandemic. The restaurant owners plan to create a corner space on this level for a chef's table with a view of the open kitchen. 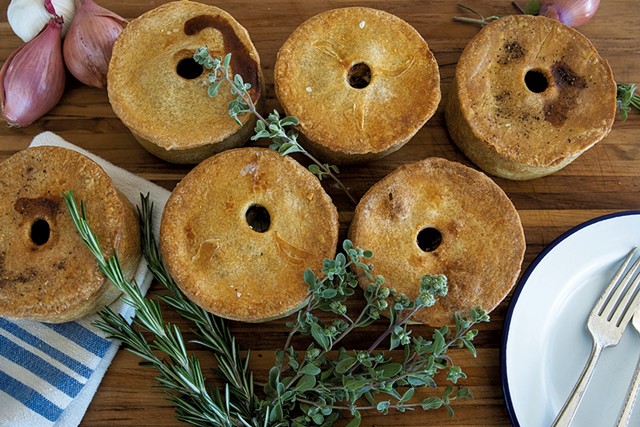 The front-facing street level of Piecemeal Pies will offer two separate entrances for customers: one side for takeout service, another for folks who want to dine in.

Barrett, who trained as an architect, and Brown said that designing and planning a site is a favorite feature of restaurant ownership. COVID-19 prompted them to alter their Stowe design plan — expanding customer space by putting the kitchen downstairs.

"I always revert back to my theory that the only way to really be successful in the restaurant industry is to reduce as many variables as possible," Barrett said. "And COVID is a giant monster of a variable, and it has shown us how fragile the industry is.

"We don't want to look at the lessons we've learned and the changes we've made over the past year as a Band-Aid," he continued. "We want it to be integrated into the design and the experience, so it can still be positive and safe. It's an opportunity to do it right from the beginning."

One of the investors in Piecemeal Pies is Scott Cone of Pomfret, co-owner of Woodstock-based Discovery Bicycle Tours. Cone, 59, came to know the business as a customer.

He said he loves the food and noted that the culinary roots of its specialty — savory pies — hail from the English countryside, a location where his company offers tours.

"I think it's a really neat product, and I think they've done a really good job with using very fresh local produce and local ingredients," Cone said. "White River Junction is a great location, but I think they have a huge upside if they can expand."

From a financial perspective, Cone spoke of the benefits of a diversified retirement portfolio.

"I personally like the idea of doing a variety of things [with retirement funds]," he said. "And some of those are best facilitated by a crowdsourced funding approach."

The investment funds are not only vital for financing Piecemeal Pies' expansion, they're "incredibly validating," Barrett said.

"This was just an amazing eye-opener to the impact we've had on people in the community," he said. "For them to be willing to not just come in and support us with coffee as much as possible, but to really open up their wallets with their heart and their love — it's just been pretty emotional in such a horrible year of terrible emotions."

Now, Barrett and Brown are immersed in the renovation, with hopes of getting a permit for a back patio. Barrett is planning the opening menu and said he intends to have fun with the food offerings.

"My favorite purchase is going to be a fryer designated fully for duck fat," he wrote in an email. "What more could a chef want?"

The restaurant will offer its signature fried rabbit and cheddar waffles with chile maple syrup. A classic English Sunday roast dinner "with a Piecemeal twist" is a possibility.

Barrett and Brown expect to open in Stowe sometime in June with a business plan that includes, at last, monthly payments to themselves. They're looking ahead to a third Piecemeal Pies location in a year or two — with eyes on Burlington.

"From thinking we have to close, to the world is ending, to never knowing if we're going to see our customers again, [and] to get on the other side of that and have people believe in us," Barrett said, "is just the most amazing thing. This has been a really positive experience."