White River Junction's Piecemeal Pies is known, of course, for pies. Individual savory pies, to be exact — that fixture of English pub fare. But this particular pie place is the antithesis of the quintessential dark, brooding British bar. Floor-to-ceiling windows bathe the dining tables and open bakery kitchen in bright, natural light.

Beyond the décor, the dishes elevate and celebrate traditional English cuisine. Chef-owner Justin Barrett cut his teeth at the Spotted Pig in New York City, an acclaimed British gastropub helmed by Michelin-star chef April Bloomfield. After aiding the rise of other well-known restaurants — such as New York's Fat Radish and Maine's Salt Water Farm at Union Hall — Barrett settled in the Green Mountain State to open one of his own.

Piecemeal Pies launched in fall 2016 with a locally driven menu. Tight relationships with Vermont farmers and artisans have, in Barrett's words, shaped his view "of just how good rural dining can be."

One autumn afternoon featured a butter-scented, sesame-seed-studded curried lamb pie. Other savory fillings range from rabbit and bacon to chicken and leeks. Salads are a hearty tumble of greens and herbs — some are bolstered by smoked trout, Vermont cheddar and apples; others, simply by a mustardy vinaigrette. 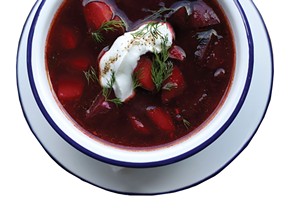 Soups such as tomato-coconut and roasted-pumpkin-and-barley are made in-house daily. Sides of miso radishes, cumin-roasted carrots, Thai beer nuts and buttered peas with mint are delicious enough to satisfy as meals — but missing out on the pies would be a pity.

Good thing there are more on the dessert menu — à la mode optional.