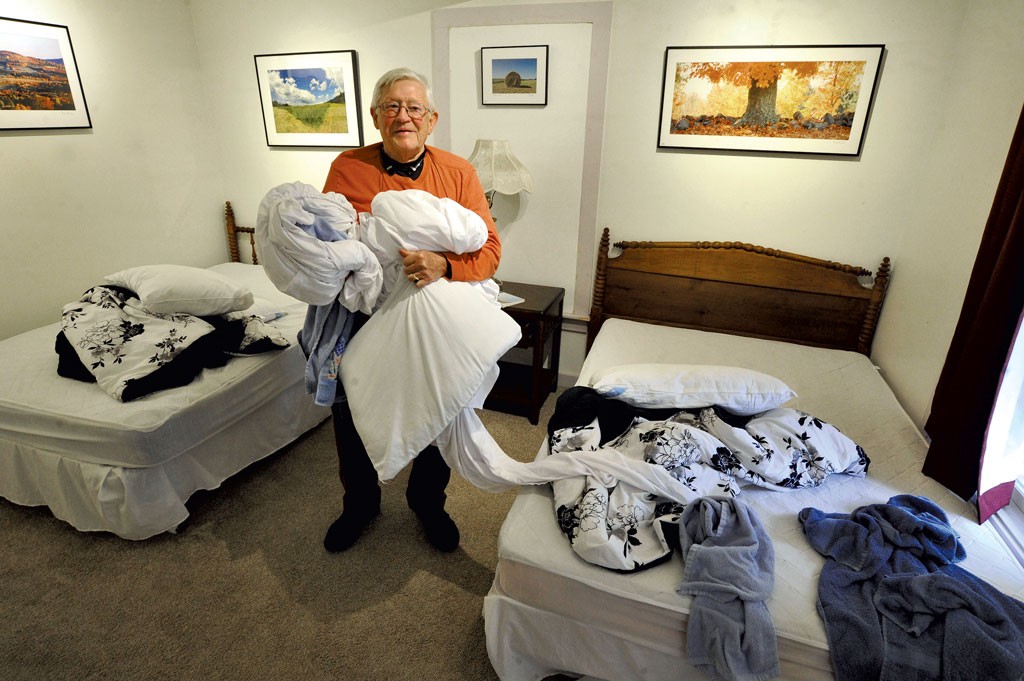 Photographer and writer Peter Miller has a unique press badge pinned to the hallway bulletin board in his 1850s former farmhouse in Waterbury — the town he prefers to call Colbyville. Handwritten in Sharpie on notepad paper, it reads, "Press: Peter Miller, Official Photographer, Woodchuck Times." Beside the badge hangs a 2009 Bread and Puppet Theater broadside, titled "Marx on Money," that lists such aphorisms as "MONEY forces contraries to embrace."

These two artifacts could not be more apt representations of Miller's new business plan: The 81-year-old artist and Burlington Free Press 2005 Vermonter of the Year recently transformed his home and gallery space into Airbnb accommodations. He hopes this embrace of the global sharing economy will enable him to afford to stay in Vermont. It's where Miller made a career using his camera to capture, and celebrate, the rugged authenticity of the state's inhabitants. Those images are gathered in his self-published books including Vermont People, Vermont Farm Women and, more recently, A Lifetime of Vermont People. Money, or lack thereof, certainly does force contraries to embrace, and the irony can be brutal.

In October, he hosted the grand opening of what he has dubbed the Squashed Gallery. The photographs that once took up the entire first floor of his home and composed his previous gallery have been relocated to a single room, where framed "photographs hang in rough formations on all walls," according to his invitation. Bins with prints of all sizes line the room. The images range from scenes of a Margaux wine harvest in the 1950s to iconic Vermontiana — such as a milk can or pile of plastic-wrapped hay bales, rendered as contemporary sculpture.

Copies of Miller's many books are available here, too. The finishing touch is a dirt-encrusted work glove tacked near the doorway at eye level. "I plan to photograph it," Miller tells a guest.

By "squashing," Miller has made space for the four bedrooms he lists online through Airbnb, a site where travelers can reserve rooms in private homes and other non-hotel sites around the world. To prepare, he repainted the walls, got new carpeting and hired a "picker" to find inexpensive furnishings. Guests can choose among the Woodchuck, Margaux, Vermont and Paris rooms, each featuring a thematically curated selection of Miller's framed archival prints.

The quarters share a kitchen and one bathroom, as well as a small library with a secretary desk and shelves holding the host's collection of photography books. These include everything from a multivolume set of Eugène Atget to carnival-stripper shots by Susan Meiselas.

Miller claims that, at the high point of his career, he made up to $85,000 a year with his writing and photography sales, but last year he brought in only $10,000. Not surprisingly, he attributes his financial difficulties in large part to an art and media landscape vastly altered by technology. "The digital revolution sort of sunk it," Miller says. While he still has his darkroom equipment, Miller pays to have his images printed by a neighbor whose camera shop went under.

Last year, the Pall Spera Company in Stowe gave Miller an informal appraisal of his property's value should he decide to sell it, taking into account major repairs as well as his mortgage. Disappointed by the estimate, which was less than half of a previous town evaluation, Miller chose to adapt instead of selling his only asset.

"The fact that someone of Peter's stature is finding it necessary, and possible, to use Airbnb to maintain his lifestyle, and to keep taking pictures, is a testament to his own inventiveness," comments Alex Aldrich, director of the Vermont Arts Council. He continues, "On one level, it is a very sad commentary that we can't find a way for artists to support themselves [here] ... There's no readymade system in this country."

"The business has saved my life," says Miller of his new B&B. Last March, he hosted some of his first guests, whom he identifies as "beer people" visiting from Costa Rica. Many guests are twentysomething professionals, and he's had a few "older European families," as well. Canadians, Miller observes, like black-and-white photography.

So far, he's made about $9,600 from hosting visitors, which he says has allowed him to keep up with house payments, including his mortgage, energy costs and taxes. Miller hopes to expand into offering full photography-centric packages, in which guests would pay for lodging along with personal tours of some of his favorite locations.

Miller aligns his struggles as a photographer and as a Vermonter. "Gentrification has won," he says, noting the Vermont economy. "There's no lifeline." Despite financial hardship, though, he says, "I gotta [take pictures], or I'm gonna go crazy."

Currently, Miller is at work on his next project, which he refers to as "the nasty book" — a collection of images with the working title The Vanishing Vermonter: An Endangered Species. He writes on his blog that the book will feature portraits of and interviews with approximately 25 Vermonters about "how the change in Vermont's culture and its high cost of living has affected their lives," along with his introductory essay. He is currently accepting donations and preorders, and plans to make the volume available next June.

Strands of cosmopolitanism have enhanced Miller's lifelong love affair with Vermont, which started when his family moved to the state in 1947, during his teen years. As a student at the University of Toronto, he met the famous portrait photographer Yousuf Karsh and traveled to Europe as his assistant, where he met Pablo Picasso, Albert Camus and other notable figures of the time.

Miller worked for LIFE magazine in New York City as a photographer and reporter in the '50s and '60s, then returned to Vermont to raise his children. His website declares that he is "the only American photographer with a daughter who owns a Mexican restaurant in London, England."

In a September blog post titled "Peter Miller Re-invents Himself," the photographer is shown clutching bed sheets with a somewhat aghast expression on his face. The caption is "Peter Miller, Chambermaid," and the last line of the post reads, "I hate washing sheets and making beds!"

Still, it's possible that Miller's new persona as a host is more than an economic exigency. "Next time you come," he says, "you can try my applesauce."