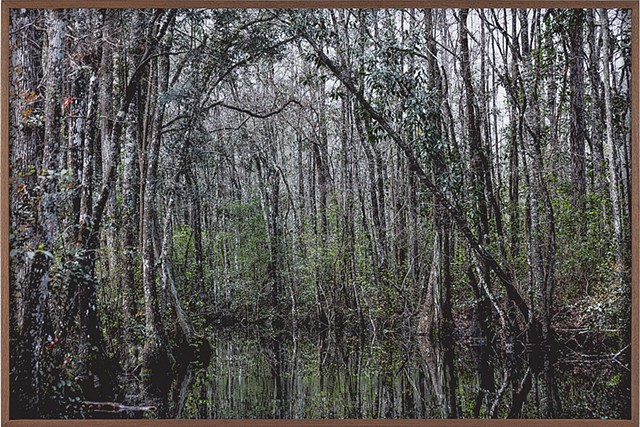 Since the time Catherine Opie requested and received a camera for her 9th birthday, she has been photographing what she sees — and seeks out. As her gallery, Lehmann Maupin, explains on its website, Opie's photography examines "the ideals and norms surrounding the culturally constructed American dream and American identity." Her views on identity were inclusive long before that became a buzzword.

Now 60, the Ohio-born, Los Angeles-based artist has earned an international reputation for her acute observations. Some might know her best for her portraiture, with subjects as divergent as gay, lesbian and transgender individuals; high school football players; and late Hollywood icon Elizabeth Taylor. And then there are Opie's self-portraits, in which she appears both deeply vulnerable and assertively present.

But the photographer has also trained her viewfinder on broader subjects: neighborhoods, cityscapes, highways and landscapes from across the country. Vermont gallerygoers have a rare opportunity to sample the latter in person at the Current in Stowe — specifically, 11 large-scale images from Opie's "Swamps" and "Yosemite" series.

Opie's photographs invite viewers to look closely, not to find aha clues to a hidden agenda but to think for themselves. tweet this

Visitors will engage with this exhibition at superficial or deeper levels, each likely to generate questions. Opie's photographs invite viewers to look closely, not to find aha clues to a hidden agenda but to think for themselves: What are we looking at here? There are no wrong answers.

On the surface, we're looking at scenes in the Okefenokee Swamp, a 438,000-acre wetland in Georgia, and Yosemite Falls at Yosemite National Park in California.

Two of the swamp pictures are so dark and enclosed that they induce claustrophobia, pulling the eye toward lush details of lichen and moss and watery mystery. It's natural to ponder, with some trepidation, what creatures lurk here.

One such beast is in plain sight in "Untitled #2 (Swamps)": an alligator. Looking equal parts sluggish and menacing, the dinosaur-remnant reptile is half submerged. The shallow water, dotted with lily pads, reflects the scrubby vegetation surrounding it.

Opie uses reflection as a compositional device in "Untitled #7 (Swamps)." From her vantage point across a body of water, she captures an image that could look almost the same upside down — the still water mirrors the tree line and sky perfectly.

Water is a mighty force in Opie's "Yosemite Falls" photos; one can imagine the roar as it drops from a height of 2,425 feet. The words "national park" call to mind vistas of splendorous mountains in the American West. But Opie isn't going for grand. She has cropped these images tightly, eliminating sky and ground, and focuses our attention on that spume-white crevice in the rock face.

Four of the photos at the Current also dispense with focus — literally. Three are so myopically hazy that they become abstractions, whispers of content. In the fourth, "Untitled #6 (Yosemite Valley)," Opie allows a trace of blue sky to define the top of the waterfall. Two trees in the foreground give the image a vague sense of depth.

Why are these images out of focus? To ask that is to contemplate the meaning of blur. Is Opie implying a landscape in danger of disappearing? Do these swamps and mountains, with their respective water resources, have something in common?

Yes and yes. As the Current's gallery guide relates, Opie's landscapes "are both gorgeous documentations and a quiet plea for environmental preservation."

The Okefenokee is a recreation destination and a wildlife refuge — objectives seemingly in opposition. Worse, according to scientific reports, the climate crisis could bring drought to the region, threatening the wetland's plant and animal ecosystem. And in California, warming temperatures and drought have already exacerbated forest fires and an influx of non-native insects.

The Current's gallery guide also hints at the parallels between natural and political landscapes in Opie's work: "Her swamp series in particular evoke[s] not only the dangers of climate change, but the precarious state of our country, as calls to 'drain the swamp' erode fundamental structures of democracy."

It's unlikely that viewers will make that conceptual leap; Opie's exhibition is by no means didactic. Still, her images of iconic American landscapes serve as a reminder that these unique treasures can be lost. Executive director and director of exhibitions Rachel Moore has taken advantage of the theme to present climate-related programming, including a February 17 panel discussion titled "The Land in Which We Live: Responsibility, Caretaking, Fragility and Climatology."

For this viewer, Opie's photographs inspired deeper engagement with the artist herself — virtually, that is. The Lehmann Maupin website offers a wealth of biographical information and images from her extensive oeuvre. Best of all are Opie's video commentaries about her life, her work and how she embraces the world.