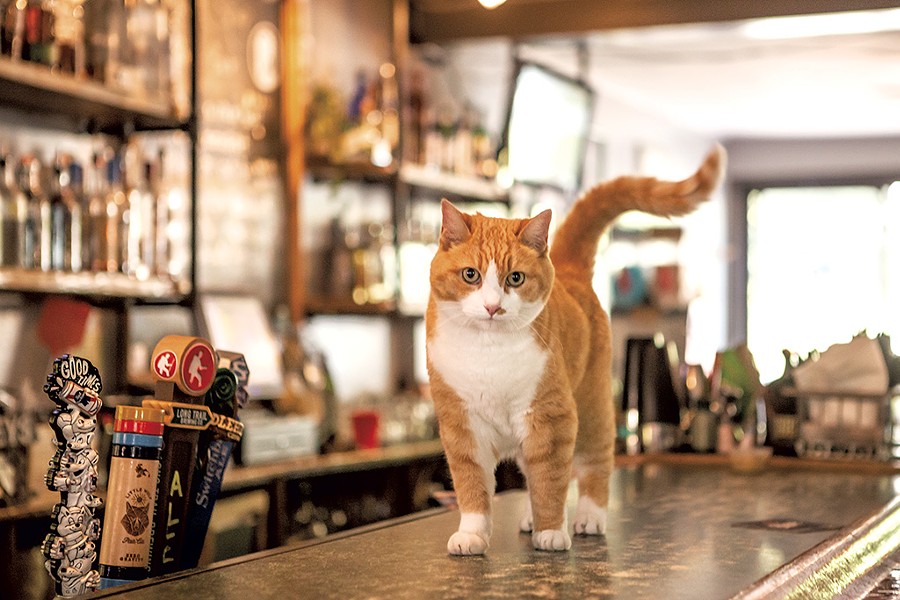 It's probably no surprise to anyone that Vermont is a pet-friendly state. Plenty of businesses welcome well-behaved four-leggeds, so even if you don't have your own furry friend, you can find a surrogate to love in many shops and offices. Studies have shown that having animals in the workplace lowers stress and fosters camaraderie. Seven Days said goodbye to a very good boy and the ultimate office dog, Rufus, in July (see him on this issue's cover), but several other canine coworkers still roam our office.

Here are other hardworking pets worth visiting if you're in the vicinity. Stop by and say awww.

Kitty Kitty has been a longtime staple on Malletts Bay Avenue. She's lived there since 2009 and has seen two bars come and go in the space that now houses Last Stop. When Shayla Ruland and Shannon Garrett bought it two years ago, it was a given that the bar and Kitty Kitty were a package deal. She can be seen hanging out on the back deck, graciously receiving treats and Christmas gifts, or napping in cardboard boxes. She was the model for a Paint and Sip night, and the resulting portraits of her hang in the bar's office. Kitty Kitty is the only one allowed to dance on the bar.

Trudy is the travel companion and general shadow of the Independent's advertising manager, Christy Lynn. Trudy is very active when she's outside, but in the office she knows it's work time. She serves as an icebreaker for visitors and is an occasional weather forecaster: If it's thundering, you'll find Trudy cowering under a desk. Her notable coworkers include Roxy, a 4-month-old miniature goldendoodle who serves as Entertainment Director (and often steals Trudy's bed); and Molly, who's massive, fluffy and loves to lie directly in office thoroughfares.

Walter, who also goes by Wally, came to the animal hospital about seven years ago as a patient. He was a barn cat who'd gotten stuck in a trap, and most of his foot had to be amputated. During his recovery, everyone in the office fell in love with him, so his owners decided he should stay. For a cat that grew up outdoors, he's remarkably social. Walter is so calm that he's an easy test candidate to see how other animals will react to cats. His favorite office activity? Playing hide-and-go-seek with staff.

Paisley the cat was Alexis Dexter's gift to herself on the first anniversary of the flower shop's opening. She reminds Dexter not to get too stressed and is the first to point out when there's something on the floor that hasn't been swept up. Maisy, the shop's social butterfly who has extra toes on each foot, joined her later. Both were part of Dexter's inspiration for her next business venture: Vermont's first cat café, at which people can mingle with adoptable felines while sipping coffee and snacking on local baked goods. After raising more than $5,000 on Kickstarter, Dexter hopes to open the shop in Barre by the beginning of September. 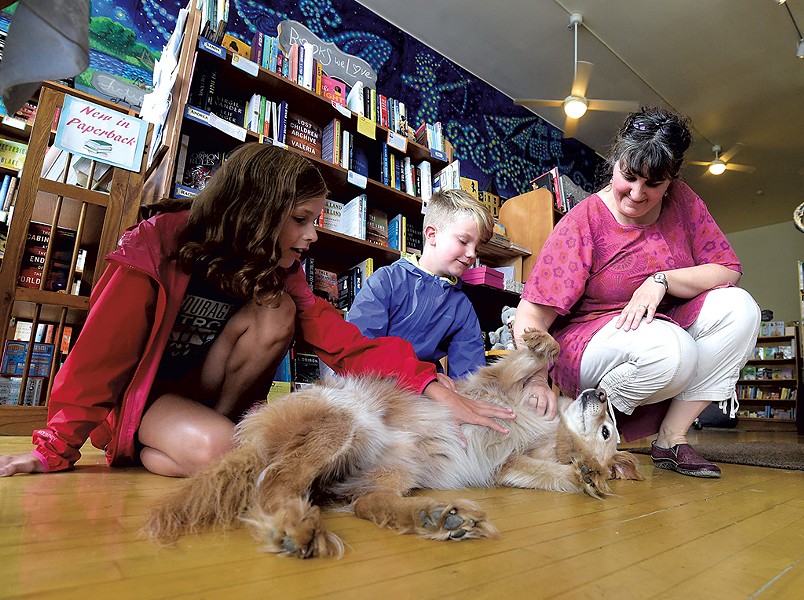 At Galaxy Bookshop, every time a new customer comes in the front door, Boo goes to let Andrea Jones, the bookshop's co-owner, know about it. He performs this service in exchange for a biscuit. Jones did not train him to do this — "He trained me," she said. On busy days with lots of customers, she has to break the biscuits up into little pieces. Boo is "part golden retriever, part carpet," according to Jones. He has a loyal fan base and is essentially unflappable. Galaxy Bookshop has a sign in the window that lets customers know when Boo is on duty; if a customer is afraid of dogs, he hangs out in the office. Otherwise, you can find Boo stretched out by the door or on his beanbag chair, or picking out dog-themed books for his occasional Staff Picks display.

Possibly Vermont's most famous dogs, Cuba and Aria are part of the trio of Bergamasco sheepdogs that have called the Quirky Pet home. Anuzzo, who was known for appearances at festivals and hanging out on Burlington's Church Street, died of cancer earlier this year. People come into the State Street store every day just to hang out with Cuba and Aria. They are often the subject of hair-braiding experiments, impromptu photo shoots and being Photoshopped onto Beatles album covers. The dogs' owners, Cindra Conison and Richard Sheir, received hundreds of messages when Anuzzo died. "Anuzzo was a C student," Conison said. "But he had people skills."

Switchback Brewing has been employee-owned since 2017. While Seven Days can't confirm whether Dyson, who belongs to brewery founder Bill Cherry, has any shares stashed away somewhere, he is definitely the brewery's golden boy. He keeps a consistent nine-to-five schedule at the taproom, where he stays busy with the "chase" half of a game of fetch (he is reportedly less enthusiastic about the "return" portion of the game). He also likes eating snow in winter and herding any wheeled apparatus that makes an appearance in the taproom — Dyson has a love-hate relationship with wheels. Switchback also usually has a few other dogs running around to keep him company.